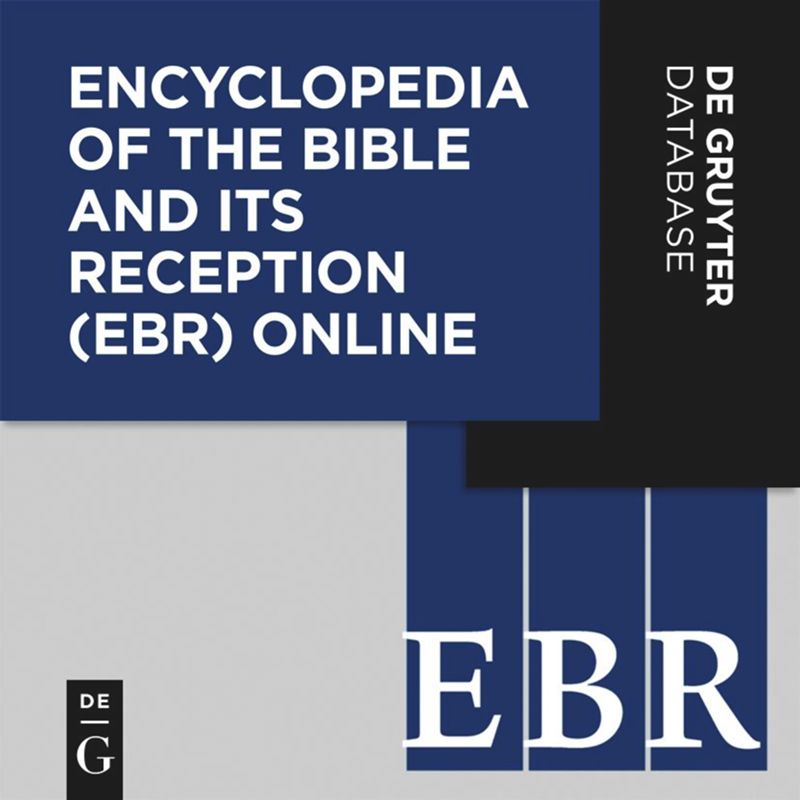 Encyclopedia of the Bible and Its Reception Online

The Encyclopedia of the Bible and Its Reception Online has been selected as a CHOICE Outstanding Academic Title of 2020. CHOICE is a publishing unit of the Association of College and Research Libraries, a division of the American Library Association. EBR Online is one of only 11 digital resources chosen. It has been recognized with this award due to the excellence of its scholarship and presentation and for its great significance to its field of research. In 2010 the print edition of the encyclopedia was the winner of the CHOICE Outstanding Academic Title award.

The Encyclopedia of the Bible and Its Reception (EBR) is the first and only comprehensive reference work devoted to the Bible and its reception.
Since the publication of its first two volumes in 2009, EBR has continued to break new ground and is an indispensable reference work not only for theology and religious studies, but also for the humanities, the arts, cultural studies, and the social sciences. As its foundation, the encyclopedia contains the most up-to-date information on the origins and development of the Bible in the canons of Judaism and Christianity. It then documents the history of biblical interpretation and reception, not only in Christianity and Judaism, but also in Islam and other non-Western religious traditions and movements.

Moving beyond the religious realm, it further innovates by recording how biblical texts have been read, interpreted, and integrated into thought, science, and culture throughout the centuries, summarizing the most recent scholarly research on the reception of the Bible in an array of academic disciplines such as classics and archaeology as well as a wide range of cultural and humanistic fields, such as literature, visual arts, music, film, and dance. Its interdisciplinary approach thus transcends a purely theological or religious perspective.

Encyclopedia of the Bible and Its Reception Online uses a powerful search engine that makes it easy to search for content.

EBR is also available in a print version.

Information for Authors and Editors

You find the EBR guidelines below, see Supplementary Materials.

* Contents of these volumes are only approximates.

Link to the submission platform: EBR Editorial Platform (We kindly request that you use Chrome to ensure that the platform runs smoothly.)

Thank you for contributing to EBR!

Meet some of our EBR Editors

The Online Editorial Platform (CMS) should be used to write, submit, revise, and/or proofread articles. We recommend to use Chrome, please do not forget to allow pop-ups. If you need assistance, please write us at ebr@degruyter.com.

Guidelines for Authors and Editors

Naaman (Commander of the Aramean Army)

The online edition contains the entire contents of the printed edition (currently volumes 1–20), as well as many articles ahead of print.

Here is some of what biblioblogger Jim West recommends for you to read in the current volume of EBR:

Laura Battini (Paris, France), Mouth I. Ancient Near East. This contribution focuses on the use of "Mouth" in Ancient Near Eastern texts, i.e., ANE mentions of "the physical mouth" as well as "the symbolic mouth," which is described in this way: "The mouth can be used metaphorically to indicate the entry of a part of the body, of an object, of a building, or of a watercourse. Other texts speak of the mouth in a symbolic way, concerning international relations on one hand and religion on the other"; and in "iconography." It is a well-crafted piece and quite informative.

Neta Bodner (Jerusalem, Israel), Nazareth VI. Visual Arts. Bodner’s essay is a study of the city of Nazareth in the visual arts. There is much to discover here. For example, Bodner observes "Late medieval and Renaissance images often show Mary’s house as the locus of the event, but the Annunciation is also depicted outdoors, with a symbolic representation of the city." And at the end of the piece, we are informed of the fascinating fact that the village of Walsingham in England has been a site of pilgrimage since the 15th century, where a replica of the house in Nazareth is located. Artwork is also featured.

Patrick Cronauer (Latrobe, PA, USA), Naboth. Cronauer examines the figure of Naboth in the Hebrew Bible, Judaism, Christianity, economics and law, literature, the visual arts (including a very intriguing drawing of the stoning of Naboth from the 12th century CE), and film. Regarding the reception of Naboth in literature, Cronauer writes, "The story of Naboth is a staple of any drama or novel about Jezebel. Anthony Trollope uses the theme in Framley Parsonage (1860–61), chapter 2, in relation to the vicar’s garden (see Jeffrey: 532). Naboth is also vilified in John Masefield’s play A King’s Daughter (1923)." And there are still more amazing facets of Naboth’s treatment throughout history outside the Bible!

Mary Claire Gibson (Blacksburg, VA, USA), Mustard Seed IV. Literature. When it comes to the appearance of the theme of the mustard seed in literature, Gibson observes, "…the mustard seed passages found in Matt 17 and Luke 17 have been alluded to in literature by Fyodor Dostoevsky, Bret Harte, and Washington Irving to play on the idea that a lot can be achieved with even the smallest amount of faith, which is often associated with the notion of moving mountains." Other uses also appear, with the final example being "… the mustard seed is also used to signify belittlement or diminution. Victor Hugo mentions the mustard seed in a diminutive manner, comparing a mustard seed under a grindstone to animals under God’s power in his collection of poems, La Légende des siècles (1877: 188)." Small things like mustard seeds play a big role in the history of the reception of the Bible and its contents.

Claudia Lepp (Munich, Germany), National Socialism/Nazism II. Bible in National Socialism. How was the Bible used by the Nazis? First, they devalued the Old Testament. Then, they attempted to purge the New Testament of Jewish influence, even going so far as to suggest that Jesus himself was an Aryan and not a Jew. "Jesus appeared as a "fighter" against Judaism, who took upon himself the associated suffering in obedience to his Father. In Die Botschaft Gottes, Jesus was not the "king of Israel" (John 13) but the "king of life" (Botschaft: 139); his death was interpreted as a brave "offering of life" (Botschaft: 135–39)." This is one of the most interesting of all the essays in volume 20.

Anna Tchitcherine (Utrecht, The Netherlands), Mouth of Hell II. Visual Arts. One of the more interesting, to me, artistic representations of a biblical citation has to do with the "mouth of hell" which has opened itself wide to receive the condemned (Isa 5:14). In this piece, Tchitcherine begins by noting that "The anthropomorphic image of the mouth of hell emerged in Britain during the 10th-century Monastic Reform and remained popular in Western Art until the advent of Renaissance. The depiction of the entrance to hell is characterized by a disembodied monstrous head with a large gaping mouth." She then delineates the path this notion took in artistic renderings. She concludes "The mouth of hell survived well into the 20th century – mostly in literature, though, which is suggestive of the potency of this theme." The entire entry in all its parts is very much worth the reader’s time.

Arye Zoref (Jerusalem, Israel), Nathan (Prophet) II. Judaism, C. Medieval Judaism. This segment of the longer entry on the prophet Nathan centers itself on his reception in Medieval Judaism. Zoref notes "Medieval Jewish exegetes were especially troubled by the prophet Nathan’s behavior when David approached him about building the temple (2 Sam 7)." "Can a prophet lie or be mistaken?" That was the question which occupied the rabbis. Also worth noting is the notion that prophets had to "want" their prophecies to come true or they wouldn’t: "Abarbanel wrote that Nathan had prophesied that Solomon would be king, but prophecies do not come true unless people strive to realize them, and like any other prophet, Nathan wanted his prophecy to come true." There is much to learn from this contribution.

Here you will find instructions for searching the Encyclopedia of the Bible and Its Reception Online and explanations of the individual search functions.

You have two different options for searching.

These operators can be combined with each other.

Please note: The search is not case sensitive.

You want to search the Encyclopedia of the Bible and Its Reception Online for all entries that mention the name "Aaron" and the biblical passage "Exodus 4". However, you want to exclude the publication "Aaron - Aniconism (Vol. 01)" from the search. For this you use the search form as follows:

The browse button allows you to quickly search for the search criterion Publication. The results list of a browse search can be further searched via the search form as described above.

On the start page of the database you can view indices of all contained lemmas from A to Z. By clicking on a lemma, the results list shows all entries which have the full lemma in their title.

The results that match your search are listed on one or more pages. The number of search results as well as the search criteria can be found above the results list.

Each search result consists of the title of the entry, author(s) if existent, access information, entry type, online publication date (print publication date in brackets, if applicable), the cover of the database as well as a button to download the PDF ("Download PDF"), if available, and a text preview showing relevant text passages and highlighting the searched term in yellow (only for Full Text search criterion).

You can access a search result by clicking on the title or cover of the database. If you do not have access to the database, please log in first.

The search results are sorted by relevancy (frequency and weighting of the searched terms). You can also sort by date ("New to old" or "Old to new") or by title ("A to Z" or "Z to A").
Furthermore, instead of the default 10 results per page, you can also display 20, 50 or 100 results per page.

The search results can be further restricted under "Filter Results". Various filter options are available for this: