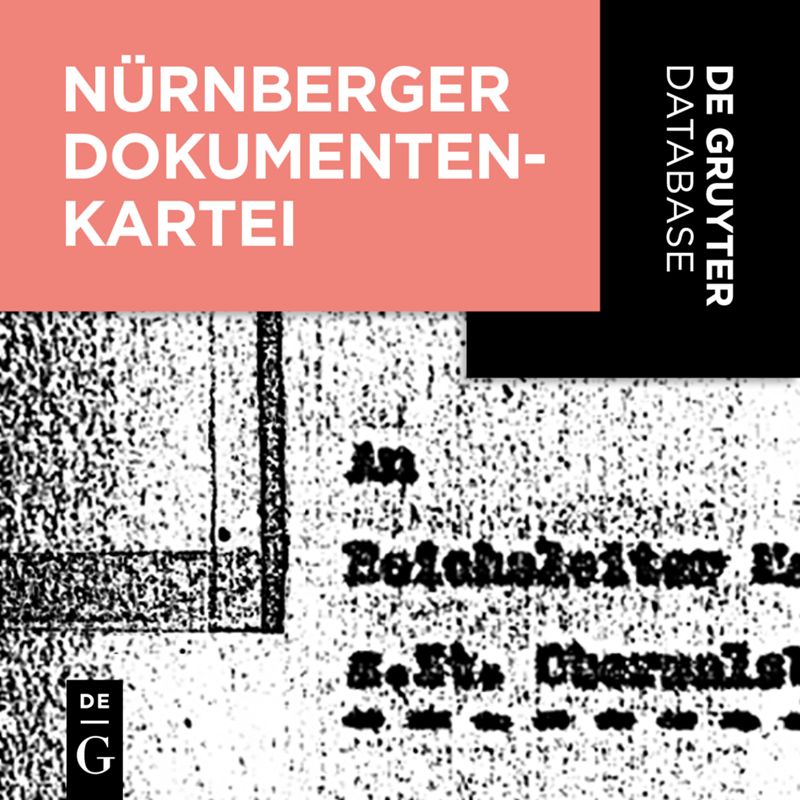 The trial materials from the main war criminal trials in 1945/46 and the succeeding trials, consisting of over 200,000 pages of evidence, is only accessible for research through this systematic indexing.

In two years of work during the mid-1950s, the “Nuremberg documents” were compiled in cooperation with the then Staatliche Archivlager Göttingen and the Westfälische Wirtschaftsarchiv in Dortmund. Each of the prosecution’s approximately 32,000 evidence documents has been provided with an index-like description and an index of subjects and persons.

The document card index provides access to a wide variety of subject areas and contains among others, descriptions from Western sources of the German economy and finances in the “Third Reich,” of the party organizations, the army, navy and air force, war plans and of the administration in the occupied territories.

The Institute for Contemporary History (IfZ) began its work as a central records office for dispersed files from the “Third Reich” and as a research institution in 1949. The first large acquisition was an almost complete set of copies and transfers of the material from the Nuremberg War Crimes Trials, made available by the Americans. The "Nuremberg documents" (“Nürnberger Dokumente”), as the trial material is usually known, originates from the main war criminal trial in 1945/46, involving 24 defendants and carried out by the International Military Tribunal, and from the twelve succeeding trials. These trials were connected with the main trial and also held in Nuremberg with American prosecutors. They involved doctors, jurists, generals, members of task forces, industrialists, administrators and functionaries of the Nazi state and the NSDAP. The “Nuremberg documents” include the protocols of the trials, the examination of defendants and above all, the prosecution’s evidence documents, systematically collected by the allies since 1943. These consisted mostly of official and official party depositories of the “Third Reich,” but also included newspaper articles, brochures and contemporary witness reports. In Nuremberg the evidence documents were categorized by criteria based on their contents and labeled with serial numbers. The most well-known series is that of the PS documents (Paris-Storey), most of which were used in the main war criminal trials, and the NO series, in which evidence for the prosecution of the NSDAP, its party organizations, the SS, Gestapo and the SD was compiled.

Reproduction of the documents in the database

For the database the card index kept by the Institute for Contemporary History has been reproduced electronically, an easy-to-read version of the indexes provided, and the index of persons and subjects standardized. The index cards are included in the document group Primary Sources. A summary of the series of evidence documents is linked to each index card as a related document and can be viewed separately in the document group “Explanatory Material.” The keyword catalog of the Institute for Contemporary History, upon which the indexing of the documents is based, can also be found there.

Editors of the first edition in Deutsche Geschichte im 20. Jh.