In China, whether there exists the asymmetry in the role of monetary policy? This is an important issue closely related with macroeconomic policy-making. It’s also an empirical problem that needs to be tested. In this paper, we focus on this asymmetric issue for different economic cycle.

1.1 The main form of asymmetry

In this paper, we establish money demand function to measure money shock, introduce HP filter method to calculate output gap, and then use STR model to measure the asymmetric effects of monetary policy shock.

The STR model is a nonlinear regression model that originated as a generalization of a switching regression model in the work of Bacon and Watts (see [14]) and developed by Teräsvirta et al (see [15]). These authors considered two regression lines and devised a model in which the transition from one line to the other is smooth. The STR models have been widely applied to macroeconomic time series and financial time series (see [16–18]).

A two-regime STR model may be written as follow:

where is a vector of exogenous explanatory variables. Φi = (ϕ0i, φ1i,⋯,φmi)′, i = 1, 2 is parameter vectors, m = p + k, and εt is a white noise error process with mean zero and σ2. The so-called transition function G(st; γ, c) is a continuous function, bounded between zero and one, and the transition variable st could be assumed but not limited to be a exogenous variable, a function of the lagged endogenous variable, that is st = h(wt; α)for some function h which depends on the parameter vector α, and even a liner time trend (st = t).

One of the most popular applied choices for G(st; γ, c), which is also applied to this paper is the first-order logistic function

The resultant model is called the logistic STR (LSTR) model. In this case, the transition function changes monotonically from 0 to 1 as st increases and G(c;γ,c) = 0.5. The parameter c in (2) can be interpreted as the threshold between the two regimes, and the parameter γ determines the speed at which the transition function changes as st increases; the higher γ, the faster this change is. When γ = 0, the transition function G(st; γ, c) = 0.5, so the STR model becomes linear. At the other end, when γ → ∞, the transition function approaches the indicator function I [st > c], defined as I [A] = 1 if A is true and I [A] = 0, otherwise, and consequently, the change of G(st; γ, c) from 0 to 1 is becomes instantaneous at st = c. Hence, the LSTR model reduces to a two-regime threshold regression (TR) model. The LSTR model can model business cycle asymmetry conveniently whose dynamic properties are different in expansions from what they are in recessions, and the transition from one extreme regime to the other is smooth (see [15] and [19]).

In certain situations where the dynamic properties of the process is similar at both large and small values of st (relative to c). It can be modelled by the exponential STR (ESTR) model, which is given by (1) with exponential function

The exponential function is symmetric around st = c and has the property that G(st; γ, c) → 1 both as st → +∞ and st → –∞ whereas G(st; γ, c) = 0 for st = c. For either γ → 0 or γ → ∞, the exponential function (3) approaches a constant, so the ESTR model collapses to a linear model. The ESTR model has been applied to real exchange rates successfully, motivated by the argument that the behavior of the real exchange rate depends nonlinearly on the size of the deviation from purchasing power parity (see [20–22]).

3.1 The definition of monetary shock

When the economy is running below the level of potential output (that is negative output gap), the easing monetary policy should be implemented to increase the money supply rate. Then, the money demand less than supply produces positive monetary gap which promote the economy recovery to potential rate.

Therefore, output gap will respond to the changes of monetary gap. To define monetary shock, the variable of monetary gap is more rational than the money supply growth.

We introduce M2 as dependentatory variable, GDP as the independented variable. Based on the period of the first quarter 1992 to first quarter 2013, the long-term equilibrium model is established after logging these variables. With this model, we may measure the money demand of real economy from the perspective of monetary demand. The model is as follows:

According to the estimation equation, the model fitted values can be regarded as money demand; the actual statistics value log(M2) is the money supply; the residual of the model ε (denoted “resid”) is monetary gap that is monetary shock. 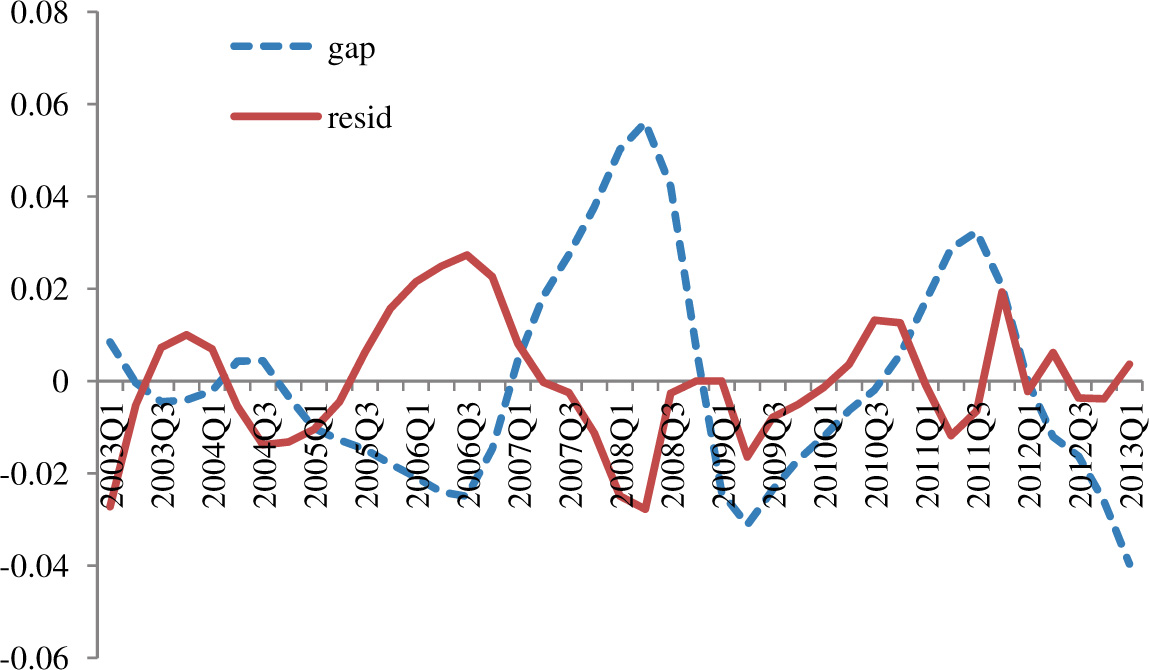 The time series of gap and resid 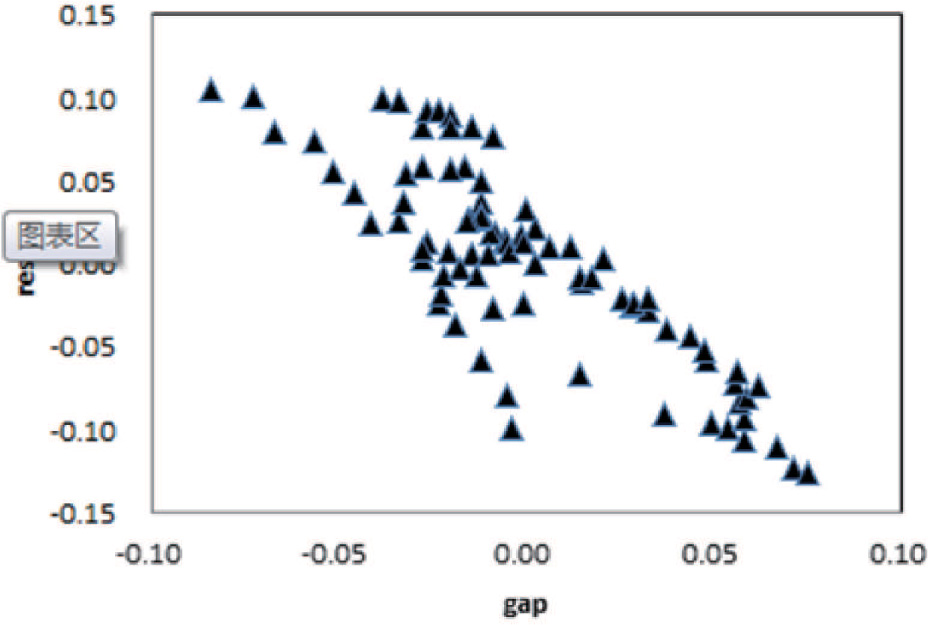 The scatter diagram of gap and resid

If gap > 0, ‘demand greater than supply’ in real economy shows that economic system has maximized the potential output capacity. In this upturn stage, the tightening monetary policy will put into practice, which will produce negative monetary shock for reducing economic growth back to the potential level.

If gap < 0, ‘supply greater than demand’ in real economy shows that the potential output capacity hasn’t been fully explored. In this downturn stage, the easing monetary policy will put into practice, which will produce positive monetary shock for promoting economic growth close to the potential level.

We establish STR model based on the same sample as before. Taking into account the lag effect of monetary policy, we introduce ‘gap’ as independented variable, lagged ‘gap’, lagged ‘resid’ as dependentatory variables, and lagged ‘gap’ as transfer variable.

According to the parameters of significance and the fit of the model test, we screen out the final selected model whose results showed in Table 1 and Figure 3. 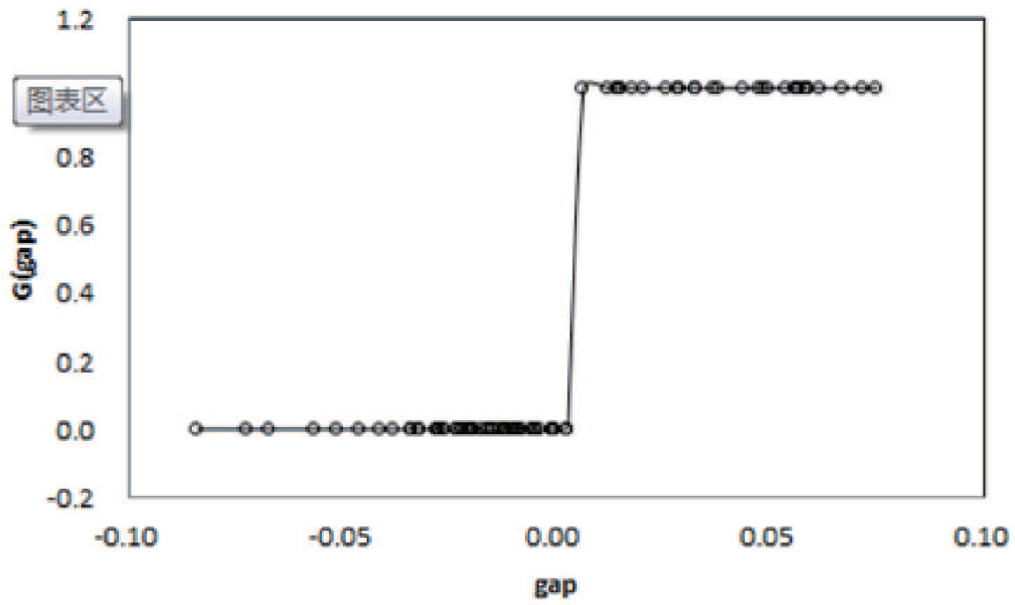 Thus, this model can be divided into two mechanisms according to the size of the output gap. The level, whose transfer function G(gapt) is equal to 0.004, is considered as the cut-off point.

The mechanism one: gapt < 0.004. Under this mechanism, the output gap is negative or close to zero and the economy is in downturn stage, the coefficient of effects on economy from monetary shock is 0.088.

The mechanism two: gapt > 0.004. Under this mechanism the output gap is positive and the economy is in upturn stage, the coefficient of effects on economy from monetary shock is 0.219.

Looking at the results from the model estimation, there are significant asymmetric effects of monetary shocks on GDP. The impacts of negative monetary shock on economic grwoth in upturn stage are greater than those of positive shock in downturn stage.

Based on the same sample with the previous, we establish STR model for CPI. Collect data of relative ratio with fixed base for CPI, then deal with this series with logarithmic processing and transforming by the first-order difference, denoted as ‘dlcpi’. Take ‘dlcpi’ as independented variable, lagged ‘dlcpi’ and lagged ‘resid’ as dependentatory variables, lagged ‘gap’ as transfer variable.

Thus, this model can also be divided into two mechanisms according to the size of the output gap. The level, whose transfer function G(gapt) is equal to -0.001 is considered as the cut-off point.

The mechanism one: gapt < -0.001. Under this mechanism the output gap is negative and the economy is downturn stage, the coefficient of effects on CPI from monetary shock is 0.012.

The mechanism two: gapt > -0.001. Under this mechanism the output gap is positive or close to zero, the economy is in upturn stage, the coefficient of effects on CPI from monetary shock is 0.040.

This model estimation results show that, there are significant asymmetric effects of monetary shocks on CPI too.

The impacts of negative monetary shock on CPI in upturn stage are greater than those of positive shock in downturn stage. 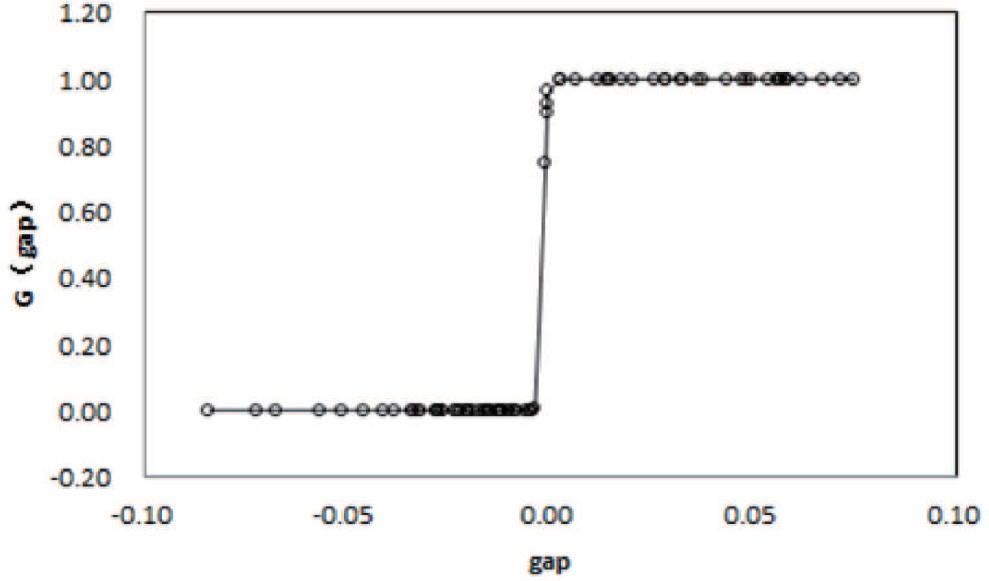 As is we all known, the asymmetric effects of monetary policy may be seen not only in different economic cycles, but also in the direction and power of monetary policy. Thus, the issue to study asymmetry from multi-dimension via multi-mechanisms STR modeling should be researched further.

[6] Ouyang Z G. The nonlinear dynamics of interest rate in China and its effect on monetary policy. Statistical Research, 2009, 26(4): 33–39.Search in Google Scholar

[8] Kesriyeli M, Osborn D R, Sensier M. Nonlinear and structure change in interest reaction function for the US, UK and Germany. Discussion Paper Series of the University of Manchester, 2004.Search in Google Scholar