Celebration at the Institute of Applied Optics, University of Stuttgart, Germany

On July 1, 2016, former colleagues and current researchers celebrated the 80th birthday of Hans Tiziani at the Institute of Applied Optics (ITO) in Stuttgart. During his term as the director of the ITO from 1978 to 2002, Professor Tiziani shaped the institute into a leading international center for outstanding research in surface metrology, active optics, aspheric lens measurement, diffractive optics, and non-destructive testing. As a former R&D director of the Swiss optics manufacturer WILD-Herbrugg, he always had an eye on the direct relation between research and advances in industrial applications. In the four decades of his scientific career, he published approximately 400 scientific articles and contributed to 25 textbooks.

Professor Tiziani as the nestor of European optical metrology received a number of awards in recognition of his lifetime achievements. These were in many fields, particularly in optical metrology and optical testing; high-precision microscopic surface and 3D measurement and multisensor techniques; deformation and vibration analysis, double pulse techniques in digital holography; and in heterodyne temporal speckle pattern interferometry. Among these awards were the 2012 SPIE Chandra S. Vikram Award, the 2001 SPIE Dennis Gabor Award, and the 2009 SPIE President Award. He is fellow of the SPIE and the Optical Societies of Europe and America. He served as director in German, Swiss, European, and American learned societies. Additionally, Professor Tiziani is an honorary lifetime member of the German Society of Applied Optics (DGaO).

After a scientific life in Paris, London, San Jose (USA), Zürich, and Stuttgart, with all those achievements, he remained a modest person, living in a small village in Switzerland overlooking the Rhine Valley. When asked for his recipe for success, he said, ‘Diligence and persistence certainly pay off’.

At the birthday celebration, several dignitaries of the university and former colleagues (including AOT Editor-in-Chief Michael Pfeffer) gave commemorative speeches before presenting Professor Tiziani with a very special gift: an antique telescope. A special hologram was mounted on the telescope, showing the ITO Logo and Professor Tiziani. This relates strongly to the pioneering work he did in holographic measurement methods. 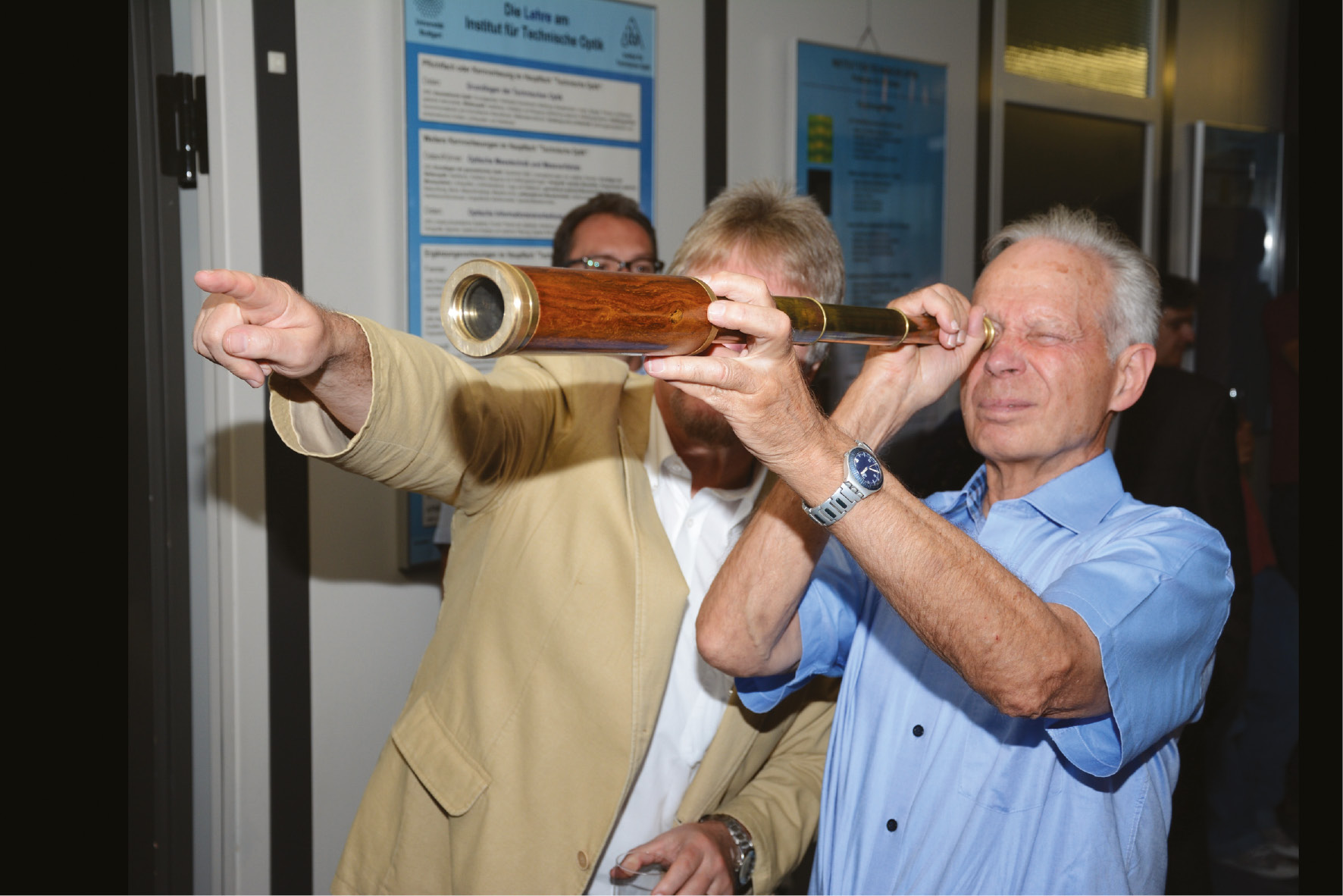 A 3-day research workshop dedicated to the European Advanced Optical System Design (ADOPSYS) Project was held on June 1–3, 2016 at the National Research University of Information Technologies, Mechanics, and Optics (ITMO) in St. Petersburg, Russia, featuring lectures from leading world experts in the field of optics and photonics.

Funded by the European Union, the ADOPSYS Project was launched in 2013 with the support of FP7 Marie Curie. Seven European universities, including ITMO University, and three companies created an educational consortium for the preparation of highly qualified specialists in optical system design. ADOPSYS has two objectives. The first is the development of new optical design tools in close collaboration with science and research organizations and industries, and the second is advanced training for young scientists given by experts from leading European universities and companies.

‘The ADOPSYS project is aimed at preparing a new scientific elite. Leading scientists are involved in training postgraduates, they have access to the best equipment, and we can say that their current studies are at the forefront of innovation’, said Marina Letunovskaya, an engineer from the laboratory of design of optical-information and energy-saving systems at ITMO University. ‘For example, at ITMO University, Nenad Zorich is involved in research devoted to optical systems for photolithography. For his dissertation, we conducted a comparative analysis and found that his solutions are not inferior to other counterparts around the world, and in fact, are in some ways superior to them.’

This is the third time a workshop for ADOPSYS Project participants was held. The previous ones took place at Delft University in the Netherlands and at the Free University of Brussels in Belgium. The first day of this seminar was devoted to reports on the interim results of postgraduate students’ work. The educational part then followed. On June 2, Pierre Chavel from the Institute of Optics in France presented ‘The effect of the interference fringe localization in the design of interferometers’, and Pablo Benitez from the Polytechnic University of Madrid in Spain, spoke about ‘The advanced technology design for freeform surfaces in non-imaging optics’. On June 3, Michael Pfeffer, from the University of Applied Sciences Ravensburg-Weingarten in Germany and member of the ISO working group on optical standards, gave a presentation on ISO standards in optics.

The next ADOPSYS event is scheduled at the Institut d’Optique Graduate School in Paris for October 25–27, 2016. 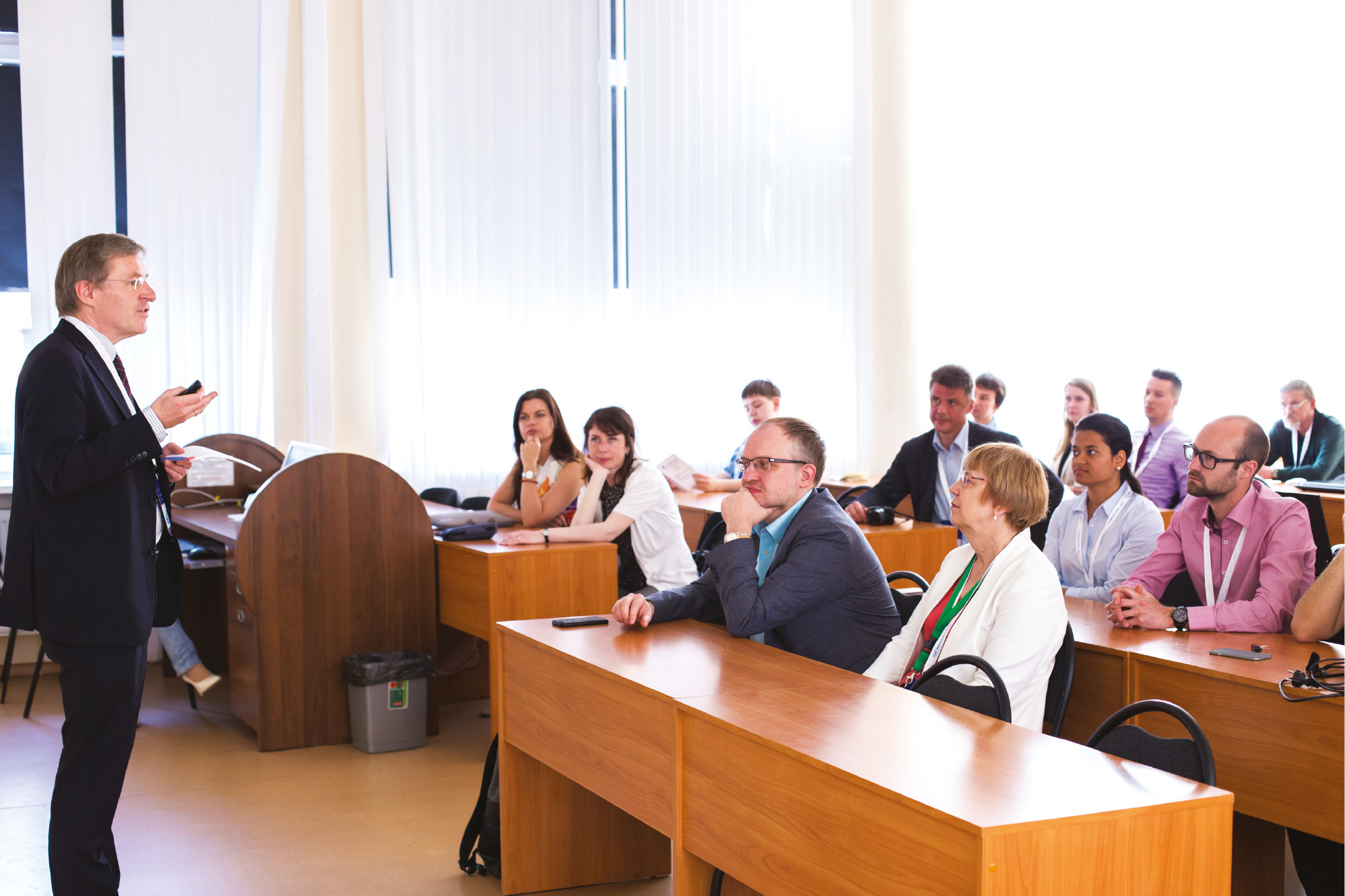 Paul Urbach, an optics professor from TU Delft (The Netherlands) is a regular speaker at the ADOPSYS workshops.