A new biological definition of life

In the last few decades, there has intensive development in molecular biology and its pervasion into various fields of biology and medicine. In this milieu, it is important to have a biological law that can unify the functions of all living unicellular and multicellular organisms, as well as non-living carriers of genetic information, into a single system of biological definition of life. The formulation of such a law based on the definitions of life and the general biological functions of life will allow the identification of new avenues for drug development and prediction of the results of genetic interventions.

Defining life is important to understand the development and maintenance of living organisms and to answer questions on the origin of life. Several definitions of the term “life” have been proposed (1, 2, 3, 4, 5, 6, 7, 8, 9, 10, 11, 12, 13, 14). Although many of them are highly controversial, they are predominantly based on important biological properties of living organisms such as reproduction, metabolism, growth, adaptation, stimulus responsiveness, genetic information inheritance, evolution, and Darwinian approach (1, 2, 3, 4, 5, 15).

As suggested by the Nobel Prize-winning physicist, Erwin Schrödinger, in his influential essay What Is Life ?, the purpose of life relies on creating an entropy, and therefore defined living things as not just a “self-reproducing” entity as living cells involve more than just replication of DNA (10). Some authors have proposed the definition of life predominantly based on the fact of reproduction, such as “Life is metabolizing material informational system with ability of self-reproduction with variations” proposed by Trifonov (14). This definition is close but is a much more minimalistic determination of life compared with the definition of Macklem and Seely - selfcontained, self-regulating, self-organizing, selfreproducing, interconnected, open thermodynamic network of component parts which performs work, existing in a complex regime which combines stability and adaptability in the phase transition between order and chaos, as a plant, animal, fungus, or microbe” (3).

On the contrary, all definitions based on reproduction are limited to events that happen on the Earth, but they should be applicable to other possible forms of life in the universe (3).

Combining various characteristics of living objects, Ruiz-Mirazo et al. defined living entities as “autonomous systems with open-ended evolution capacities, and that all such systems must have a semi-permeable active boundary (membrane), an energy transduction apparatus (set of energy currencies) and, at least, two types of functionally interdependent macromolecular components (catalysts and records)” (13).

Furthermore, for over 200 years, the most influential biologists have discussed the definition and origin of life without precise definitions, with only phenomenological descriptions and explanations (16).

The problems and inaccuracies with the existing definitions of “life” arise due to the appearance of new categories such as artificial life (a-life, synthetic life) and life engineered by redesigning of biological components that is studied in the field of synthetic biology (17, 18, 19). Furthermore, the definition of life must be universal, for both unicellular and multicellular organisms (1, 20). The current definitions of life correspond to the phenomenon of life; but in our opinion, they do not reflect the connection of the three-domain system of Archaea, Bacteria, and Eukarya proposed by Woese in the united network of the essence of life and do not reflect interactions with nonliving objects (21).

The definition of viruses as non-living entities is consistent with that of many authors; however, their definitions are based on other characteristics such as lack of cell metabolism and the fact that viruses do not reproduce by themselves (28). As viruses evolve, certain characteristic of living organisms, as suggested by some authors, can be transferred into viruses, making them living organisms, considering that all biological entities that actively participate in the process of life are living (29, 30).

According to our definition of life, viruses are considered non-living as they do not provide “genetic information metabolism”, which distinguishes them from living objects.

Living organisms depend on NLGEs for the distribution and spreading of their genetic information during horizontal gene transfer (HGT; also known as lateral gene transfer) (31, 32). One of the most common mechanisms of acquiring antibiotic resistance is due to HGT implemented with plasmids, bacteriophages, cell-free DNA, and other NLGEs (33, 34). Recent studies have also demonstrated gene transfer between phylogenetically distinct organisms, such as between eukaryotic cells and bacteria, and vice versa (35, 36, 37). It has been demonstrated that bacteria have even acquired genetic material from the human genome (38). Moreover, some bacteriophages have been found to harbor eukaryotic genes (39). The primary goal of NLGEs in the maintenance of living organisms is highlighted by their global distribution. The total number of NLGEs in the environment exceeds the number of unicellular and multicellular organisms by many times. Indeed, it is estimated that there are >1031 phage particles in the ocean, the adult human contains >1015 bacteriophages, and marine sediments are believed to contain >0.45 gigatons of cell-free DNA and extracellular DNA (eDNA) (40, 41). eDNA and eRNA are released and are present in most terrestrial and aquatic environments, in bacterial and fungal biofilms, and in animal and human blood, where they play an important role in the distribution of genes and are frequently acquired by other organisms (42, 43, 44, 45, 46). We believe that generation and propagation of modified genes occur in the cells of living carriers, while their distribution among the microbiome involves the active participation of NLGEs. Indeed, the formation of new genes is possible only in living organisms as a result of various changes in the genome. Both living and non-living organisms containing genetic information are involved in the distribution of modified genes.

In the context of the Pangenome concept, as articulated above, the specific functions of living organisms must include the following four processes (also shown in Figure 1): 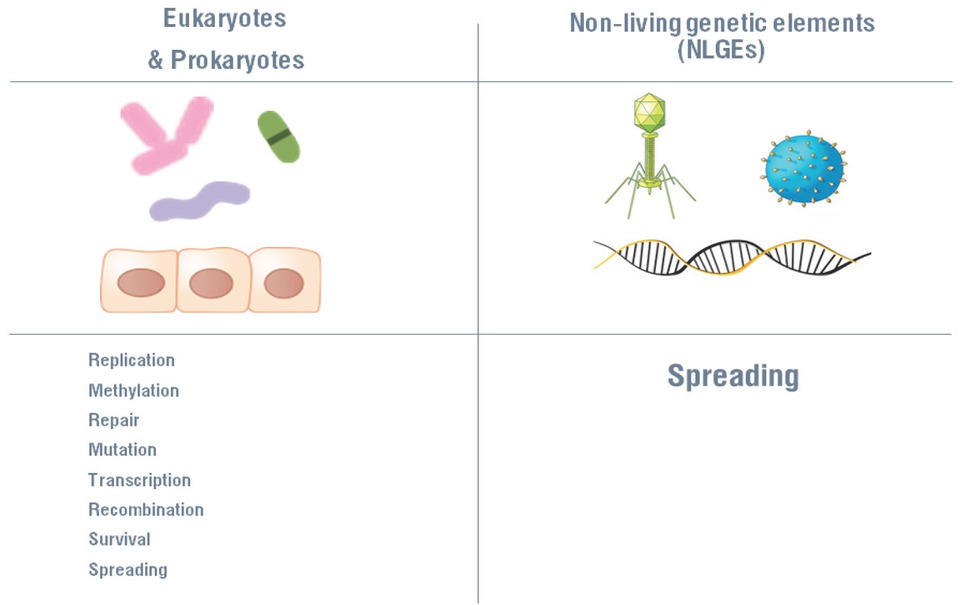 Living organisms are distinguished from non-living objects by their role and participation in genetic information metabolism.

The functioning of existing genes needed to maintain the organism’s life includes a variety of processes related to replication, modification, reparation, transcription, and translation.

Increasing the copy number of modified or new genes is an important process in introducing new phenotypic traits into the microbiome. It is assumed that modified genes are often propagated, while new genes have a high rate of extinction, which explains why the total number of genes in the Pangenome remains relatively constant (47).

However, it has been demonstrated that the new genes can sometimes be retained and propagated, which increases the probability of their widespread distribution in the Pangenome (48).

Increases in the copy numbers of modified and new genes occur by cell division and gene amplification both within the cell genome structure and as mediated by NLGEs. After capturing a gene during integrative infection, NLGEs can propagate it via their subsequent genomic replication cycles.

The fourth process of living organisms, as outlined above, is the distribution of modified or new genes among other organisms and/ or NLGEs. The dissemination of genes includes their transfer to various related and unrelated eukaryotic and prokaryotic organisms, including those that are geographically remote and located in different ecological niches. There are various methods of gene transfer, such as via migration of the animals, distribution of the plants and seeds, flow of water, and air. Genes can be transported within the genome of living organisms or as molecules of DNA and RNA within NLGEs. Among the methods of gene transfer between organisms, food chains play a vital role by facilitating direct contact among macrobiota and microbiota in the roles of predator and prey. The available data suggest that microbiota can not only send genes to and receive genes from other microorganisms but can also acquire genes of its host and other microbiota ingested by its host as food.

It is possible that genes can be disseminated between multicellular organisms via their distribution among the unicellular microbiota of one multicellular host, followed by gene transfer to the microbiota of a second host and then to the second host itself. It is known that horizontal gene transfer has played an important role in prokaryotic and eukaryotic genome evolution (49). It is believed that most, but not all, of the functionally significant HGT to eukaryotes is mediated by bacteria, in part due to chance, but probably also because bacteria have a great metabolic diversity (50, 51).

In this case, the behavior of consuming excrement that is widespread among animals can be considered as a fast way of distributing genetic information among the microbiotas of genetically related and unrelated multicellular organisms. The existence of such a HGT pathway is proven by data demonstrating the transfer of genes in different directions between fungi, bacteria, animal cells, and human cells, which plays an important role in increasing variability and adaptation (50, 52, 53, 54, 55, 56) The transportation of genes directly into cells occurs by transformation, transduction, and conjugation (57).

Therefore, the general biological function is identical for both uni- and multi-cellular organisms and links living organisms with NLGEs, which are essential for a certain stages of genetic information metabolism. Such an identification of the general biological functions of life will allow the re-estimation of traditional approaches of the cross-talk of living objects with non-living genetic elements.

Here, the novel definition of life and the Tetz biological law were considered a part of the first theoretical framework that unites the functions of all living unicellular and multicellular organisms, as well as non-living carriers of genetic information, into a single system, based on the “genetic information metabolism.”

We suggest that “genetic information metabolism” could also reflect the purpose of existence of life from a biological perspective. The processes that are a part of genetic information metabolism overlap and are key biological events that combine many well-established purposes of life in both unicellualar and multicellular organisms suggested by different authors, such as perpetuate life, reproduction, reproduction of genes, and evolution (including genome evolution) (65).

It should be noted that NLGEs are not classified as living organisms by any existing definition, and they are often not adequately considered within the theories and models of biology, evolutionary science, and other life sciences. At the same time, according to Tetz biological law, it is obvious that NLGEs play an important role in maintaining life within the Pangenome by participating in the implementation of the general biological functions of life, including the distribution of newly created genetic elements between different organisms.

In conclusion, the proposed definition of life reflects the phenomenon of life based on its completeness of genetic information metabolism. While on one hand, the definition distinguishes between living entities and inanimate objects in a sharp manner, on the other hand, it includes them in the linked network based on their role in genetic information.

A new biological definition of life
Murburn concept: a paradigm shift in cellular metabolism and physiology
Are the biomedical sciences ready for synthetic biology?
Acute toxicity of cyanide in aerobic respiration: Theoretical and experimental support for murburn explanation
The Role of medicinal herbs in treatment of insulin resistance in patients with Polycystic Ovary Syndrome: A literature review
Regulation of Interferon-γ receptor (IFN-γR) expression in macrophages during Mycobacterium tuberculosis infection
Chemical composition, antioxidant, anti-inflammatory and antiproliferative activities of the essential oil of Cymbopogon nardus, a plant used in traditional medicine
Association of TNF-α-308G/A and IL-18 Polymorphisms with risk of HPV infection among sexually active women in Burkina Faso
Three-dimensional reconstruction of individual helical nano-filament structures from atomic force microscopy topographs
Polymorphism of MMP1 and MMP3 promoter regions and HR-HPV infection in women from Burkina Faso and Côte d‘Ivoire
See more...