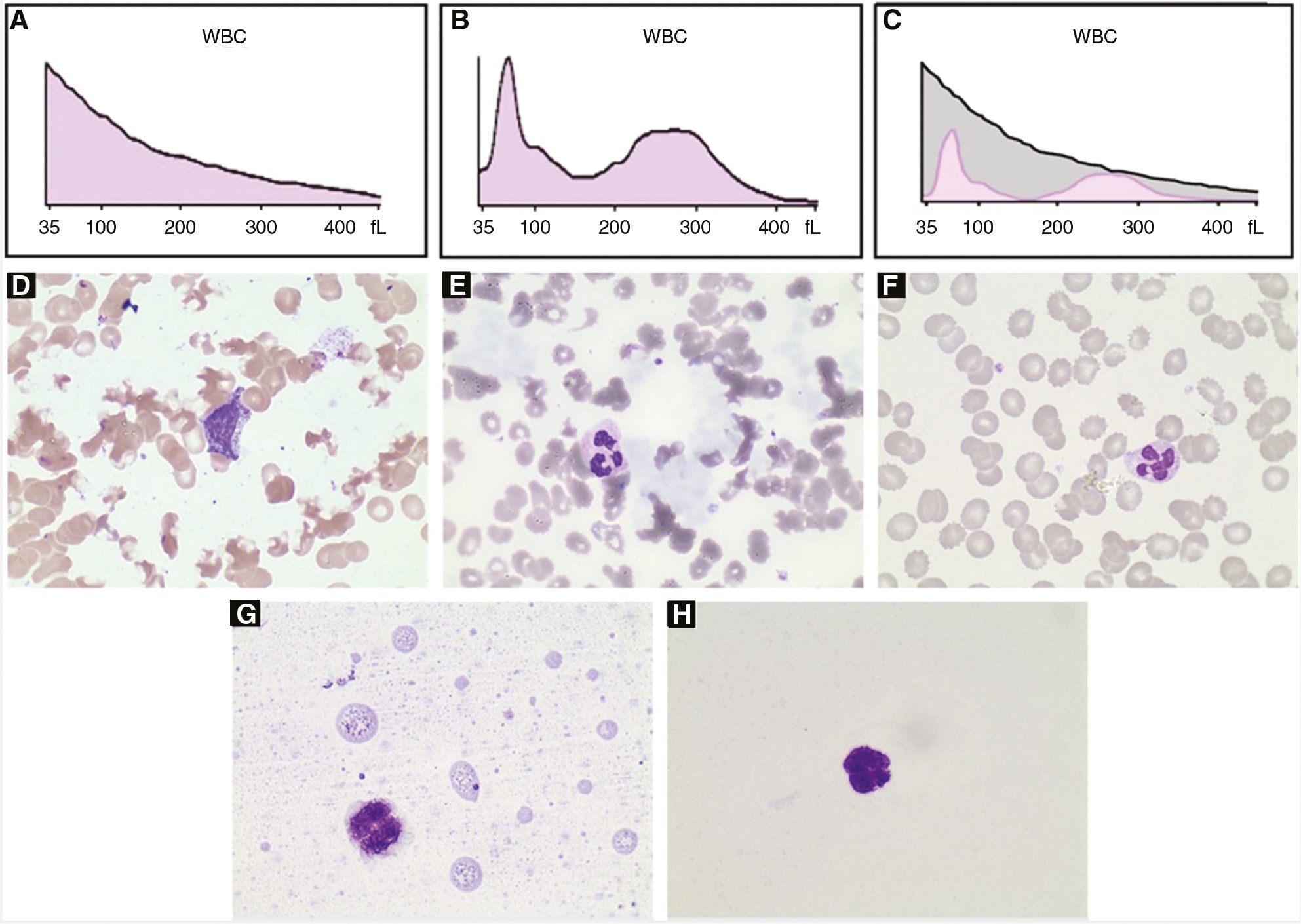 WBC histograms and peripheral blood smears of the patient’s sample.

Cryoglobulinemia is defined as the persistent presence of cryoglobulins in serum. The presence of cryoglobulin can lead to erroneous WBC counts and PLT counts in many instances [1], [2], [3], [4], [5]. As listed in Table 1, the influence of cryoglobulin on CBC is pseudoleucocytosis and pseudothrombocytosis. Only a few cases were pseudothrombocytosis, while most cases were pseudoleucocytosis. The highest fold recorded for pseudoleucocytosis was reported by Geara et al. [2], which was 8.0. Therefore, to the best of our knowledge, the pseudoleucocytosis of this case is the most prominent with an 18-fold difference. CBC detection mechanism of Coulter series counters is the electrical impedance method. The increased resistances are sensed by the instrument when cells of various sizes flow through an aperture where there is an electrical current. We analyzed the possible reasons for the 18-fold increase in WBC count. Firstly, IgM was 2.86 g/L, just slightly higher than 2.30 g/L. In the WBC channel of Coulter, the whole blood is 1:251 diluted, which means the cryoglobulin concentration will become much lower. Therefore, cryoglobulin itself unlikely causes such a remarkable pseudoleucocytosis. Secondly, the Coulter alarm indicated the presence of NRBCs (not “RBC fragments”). Under microscope, however, no NRBC was observed and the RBCs were surrounded by cryoglobulin. Therefore, the speculation of pseudoleucocytosis is as follows: RBCs and IgM-kappa cryoglobulin form lump-like RBC/cryoglobulin complexes. When the blood goes through the WBC channel, lump-like RBC/cryoglobulin complexes are degraded by lysis solution into fragmented RBC/cryoglobulin complexes of different sizes. As a consequence, these fragmented complexes derived from 1012-magnitude RBCs produce such a remarkable spurious increase in the WBC count. These fragmented complexes also lead to the specific histogram in Figure 1A, which overlaps the normal histogram of WBCs (Figure 1C is the merged image). And those fragmented complexes with size near to NRBC are recognized as NRBCs. This speculation later is confirmed by an additional experiment. We mimicked the mixture in the WBC channel according to the manufacturer’s instruction (6 mL dilution solution, 28 μL whole blood, and 1.08 mL lysis solution), centrifuged the mixture at 500 g for 5 min, and prepared a smear using the cellular layer. A lot of fragmented RBC/cryoglobulin complexes can be found (Figure 1G).

Influence of cryoglobulin on the CBC test by different hematology analyzers.

Moreover, no cryoglobulin can be seen on the slide prepared by the Coulter DxH Slidemaker Stainer, which is due to a two-step heating process of the instrument settings. Therefore, we recommend manual preparation or automatic slide maker without the heating step to find clues of cryoglobulin on peripheral smears.

All the experiments were conducted after the protocol was approved by the Ethics Committee of the First Affiliated Hospital of Nanjing Medical University. Written informed consent for the use of the clinical samples was obtained from the patient.

Frontmatter
Evaluation of an ELISA for SARS-CoV-2 antibody testing: clinical performances and correlation with plaque reduction neutralization titer
Preliminary evaluation of Roche Cobas Elecsys Anti-SARS-CoV-2 chemiluminescence immunoassay
Hypoalbuminemia and elevated D-dimer in COVID-19 patients: a call for result harmonization
Total pathway to method validation
Derivation of performance specifications for uncertainty of serum C-reactive protein measurement according to the Milan model 3 (state of the art)
FGF23 measurement in burosumab-treated patients: an emerging treatment may induce a new analytical interference
Use of a modified IDS-ISYS intact PTH assay for intraoperative PTH measurements
Agreement of dried blood spot lyso-Gb3 concentrations obtained from different laboratories in patients with Fabry disease
Influence of delayed separation of plasma from whole blood and centrifugation protocol on Zn plasma concentration
A survey of order of draw on inpatient wards and adherence to EFLM-COLABIOCLI recommendations
Successful implementations of automated minimum re-test intervals to overcome ferritin over-requesting in a Spanish hospital laboratory
Remarkable pseudoleucocytosis induced by mild cryoglobulinemia
Massive hemolysis due to Clostridium perfringens: a laboratory’s perspective
Biotin interference in cardiac troponin immunoassay – where the wild things are?
Laboratory-related issues in the measurement of cardiac troponins with highly sensitive assays
Chromatographic methods development for clinical practice: requirements and limitations
Harmonising EQA schemes the next frontier: challenging the status quo
Direct comparison study between droplet digital PCR and a combination of allele-specific PCR, asymmetric rapid PCR and melting curve analysis for the detection of BRAF V600E mutation in plasma from melanoma patients
A novel mitochondrial m.14430A>G (MT-ND6, p.W82R) variant causes complex I deficiency and mitochondrial Leigh syndrome
Obesity status modifies the association between rs7556897T>C in the intergenic region SLC19A3-CCL20 and blood pressure in French children
Influence of reagent lots and multiple measuring systems on estimating the coefficient of variation from quality control data; implications for uncertainty estimation and interpretation of QC results
Electrophoretic α1-globulin for screening of α1-antitrypsin deficient variants
A continued method performance monitoring approach for the determination of pediatric renin samples – application within a European clinical trial
Pilot study for cystic fibrosis neonatal screening: the Cuban experience
Validation of the analytical performance of the NOVEOS™ System, a system which improves upon the third-generation in vitro allergy testing technology
IgE cross-reactivity measurement of cashew nut, hazelnut and peanut using a novel IMMULITE inhibition method
Sexual dimorphism in the cerebrospinal fluid total protein content
Current state of the morphological assessment of urinary erythrocytes in The Netherlands: a nation-wide questionnaire
Within-subject and between-subject biological variation of first morning void urine amino acids in 12 healthy subjects
Proenkephalin as a new biomarker for pediatric acute kidney injury – reference values and performance in children under one year of age
Quality performance for indirect Xa inhibitor monitoring in patients using international external quality data
Clinical risk assessment of biotin interference with a high-sensitivity cardiac troponin T assay
Short- and long-term biological variation of cardiac troponin I in healthy individuals, and patients with end-stage renal failure requiring haemodialysis or cardiomyopathy
Monocyte distribution width (MDW) as a screening tool for sepsis in the Emergency Department
Performance of a Toxo IgM prototype assay for the diagnosis of maternal and congenital Toxoplasma infections