In this study, an optimized linear regression controller is proposed for velocity control of DC motor. System is tested under disturbances of different types. Step, sinusoidal and trapezoidal functions are used as reference input. A linear single layer network of weights is used to calculate the necessary armature voltage by giving past measured velocity, past reference and certain amount of future reference as inputs. Training data are generated using Proportional Integral (PI) controller parameters which are optimized using particle swarm optimization (PSO). In this first phase of training, pseudo-inverse solution is used to find the coarse parameters of the network. These parameters give suboptimal results with low performance even lower than that of PSO-optimized PI controller. In the second phase of training, parameters of the network are fine-tuned using PSO algorithm again, this time for optimization of network parameters. Quite encouraging results including up to more than 1,500% increase in performance are obtained and reported.

DC motor is modeled and simulated with second order dynamics for velocity control meaning that the inductance is also considered in the simulation. The schematic of the DC motor is given in Figure 1.

Mathematical model of DC motor is derived as follows:

From the principles of electromagnetics:

where K b is the back emf constant and ω is the angular velocity of the rotor.

For the mechanical part, using Newton’s second law of motion:

where T l is the load torque, T f is the static friction, J is the inertia and b is the viscous friction coefficient.

Velocity control of DC motor is done using closed loop control. The diagrams for PI controller and LR controller in are given in Figures 2 and 3, respectively.

where V a is the armature voltage and K p and K i are the proportional and integral constants, respectively and e is the error between ω ref and ω:

For tuning the PI controller, particle swarm optimization (PSO) algorithm is used. PSO is an optimization technique using several particles to search for the parameter space. Each particle is initialized randomly and updated iteratively. In each iteration new position of each particle is found using the formula:

LR controller is tuned in two stages. In the first stage, pseudo-inverse solution is used to initialize coarse parameters. In the second stage, PSO is used to fine tune the parameters.

Pseudo-inverse solution has the following form:

where ϕ is the concatenated input matrix, T is the target vector and W is the weight vector.

The DC motor parameters are taken realistically as shown in Table 1.

A sampling time of 1 × 10−4 s is taken for all simulations, and this is much less than the electrical time constant of the DC motor.

Windows of past and future.

The internal structure of LR controller is shown in Figure 5. 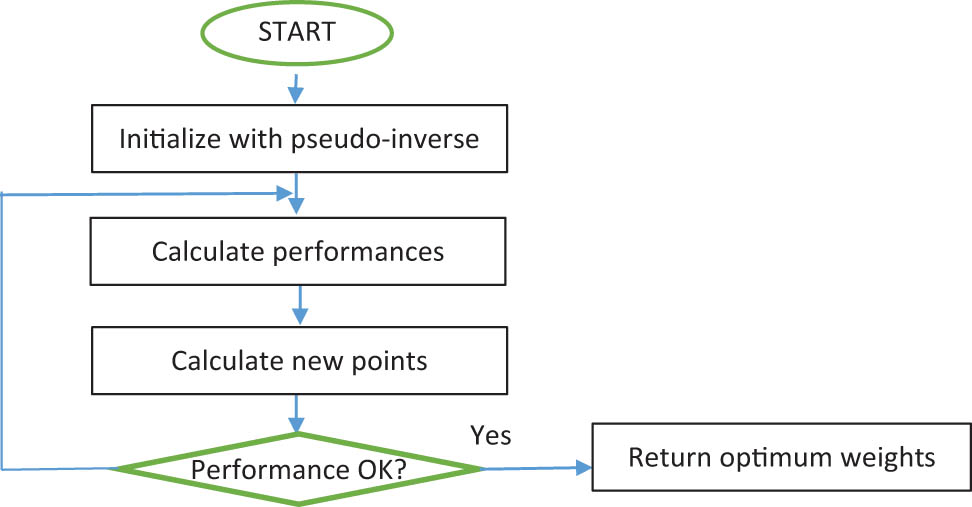 For free running DC motor under external disturbance of only static friction, performance difference between PID and LR controllers is very low and negligible as shown in Figures 7 and 8. 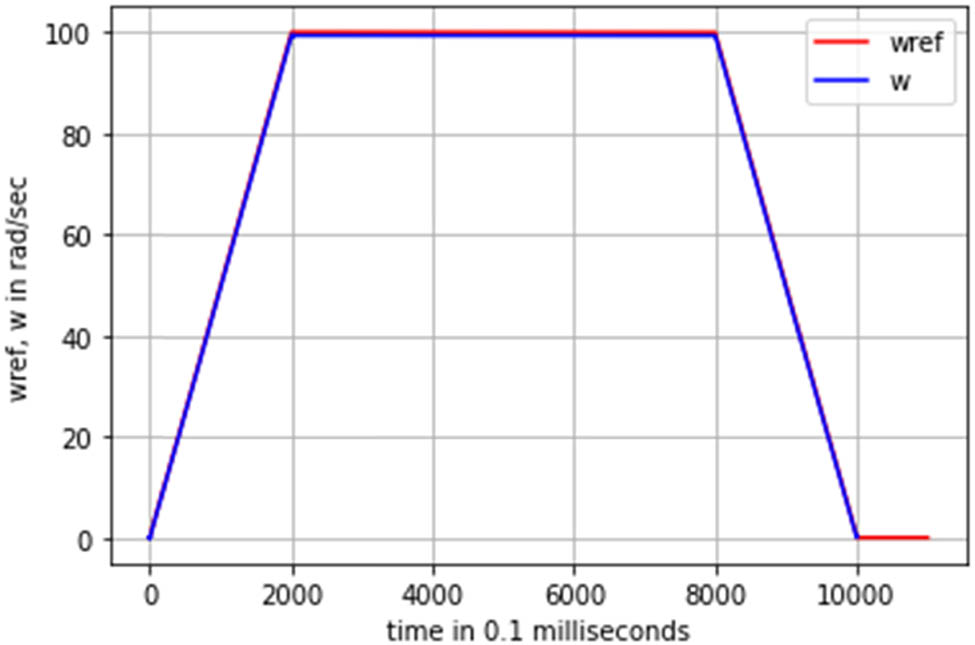 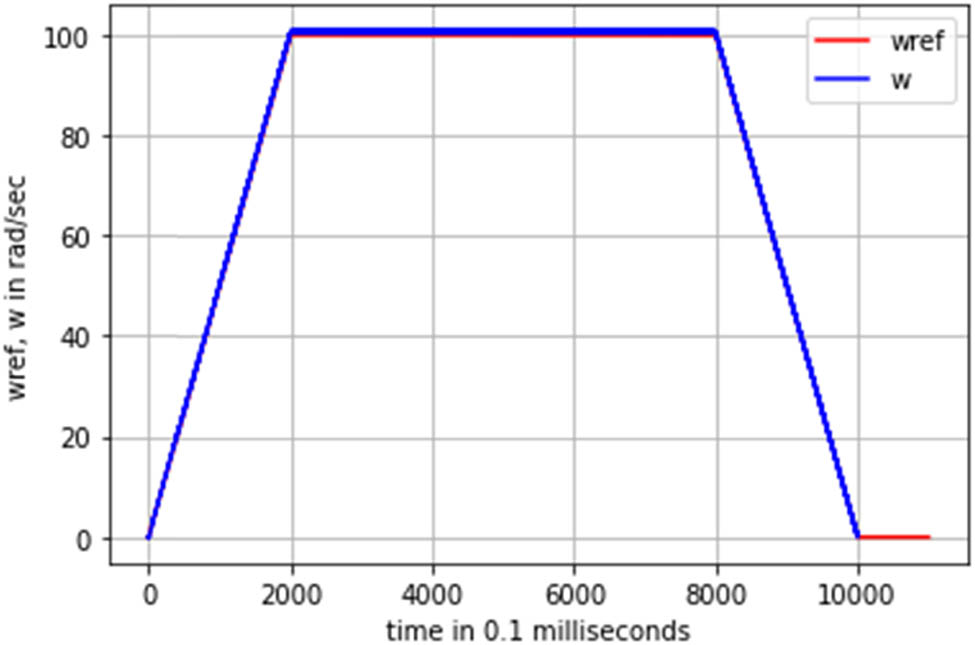 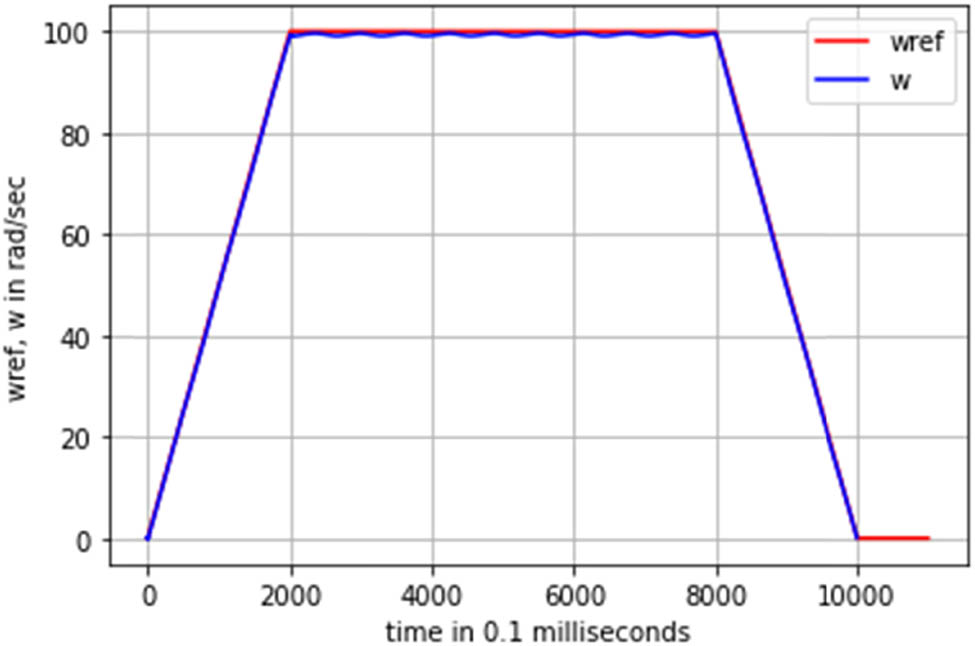 Response of PID control system to disturbance magnitude of 3 × 10−2. 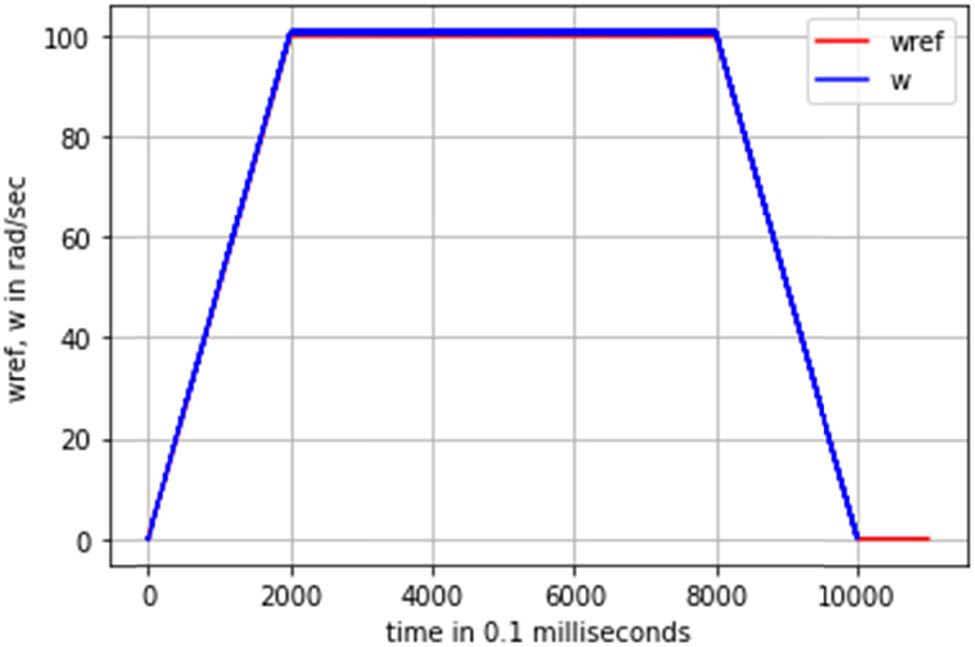 Response of LR control system to disturbance magnitude of 3 × 10−2.

Performances of two approaches for various disturbance frequencies are shown in Figure 11. 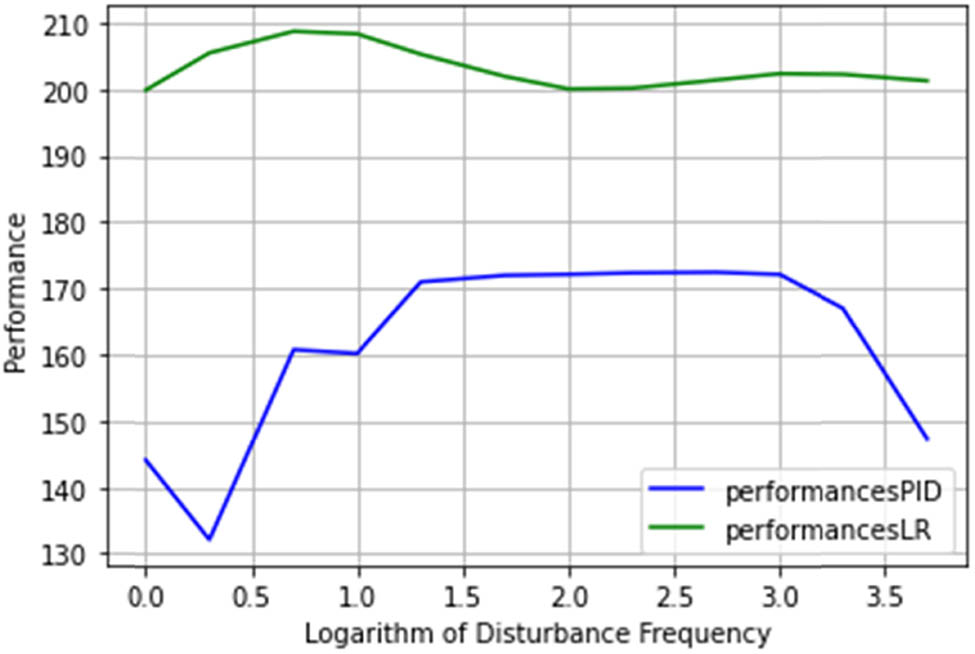 Performances of PID and LR controllers for disturbance magnitude of 3 × 10−2.

Note that LR performs slightly better than PID. The difference reduces down to 15% for some disturbance frequencies.

When the disturbance amplitude is increased further to 3 × 10−1, the performance difference increases largely as shown in Figures 12–14. 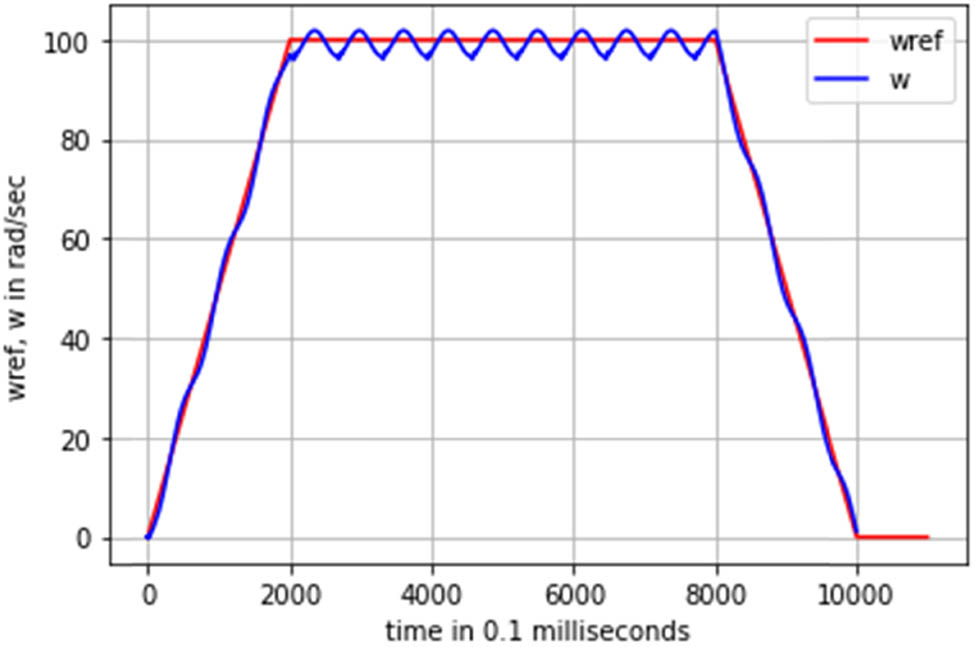 Response of PID control system for disturbance magnitude of 3 × 10−1. 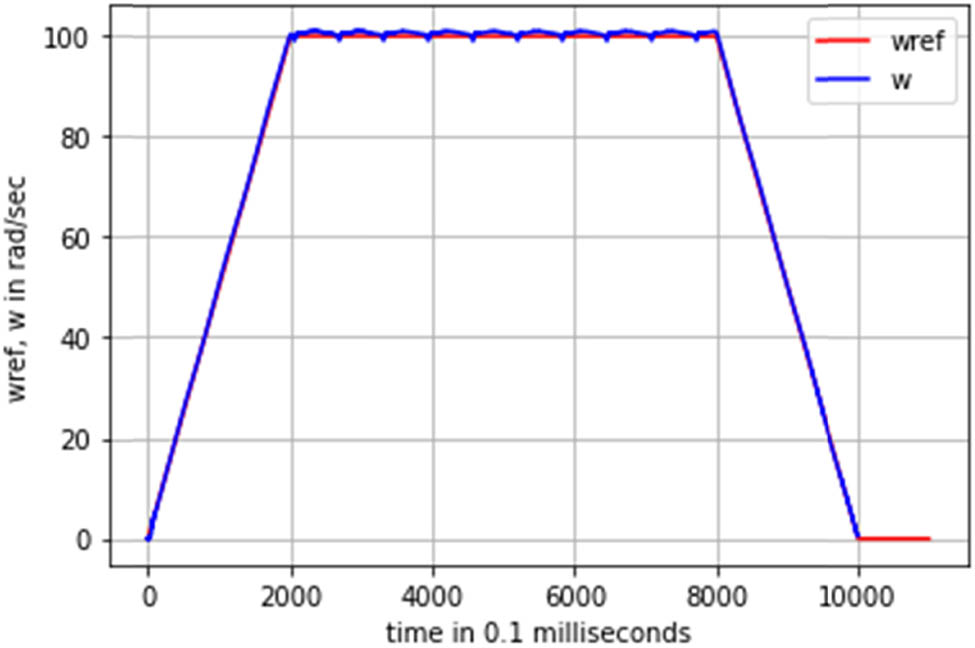 Response of LR control system for disturbance magnitude of 3 × 10−1. 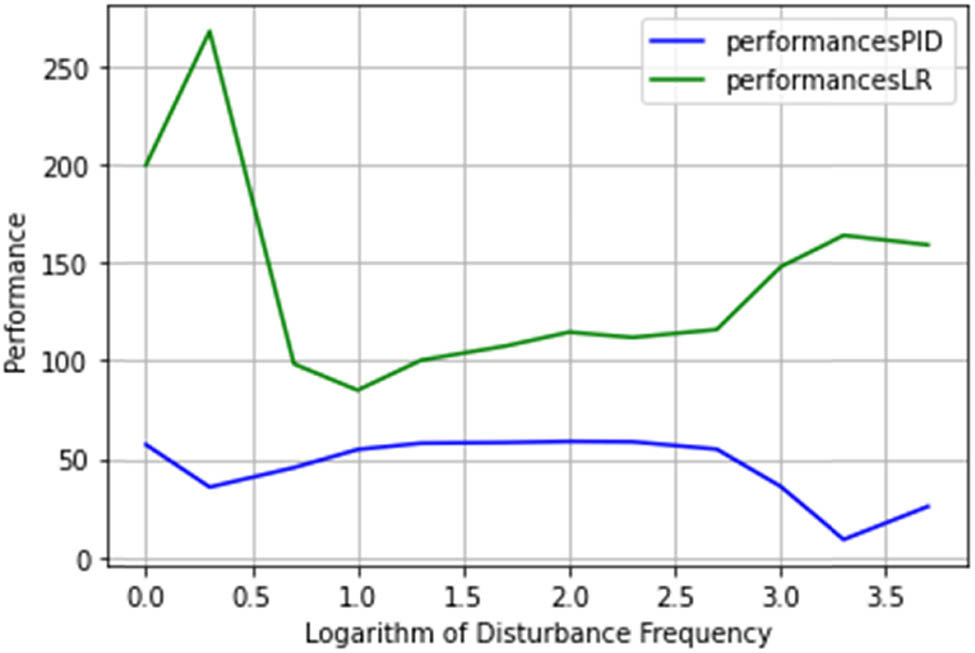 Performances of PID and LR controllers for various disturbance frequencies.

As future study, reinforcement learning is planned to be applied to the control problem with various controller architectures.