The cost of cutting tools is one of the major expenses in the machining industry, something which the companies looking for a reduction. As a result of this tendency, researchers studied this field extensively. One of the methods for increasing tool life and reducing machining cost is to apply magnetic field on the cutting region.

The first study to reduce tool wear by applying a magnetic field was made in the early 1970s by Bagchi and Ghosh [1]. Bagchi and Ghosh developed a theoretical model to show how adhesion affects wear on the tool. This model was verified with their experimental studies which demonstrated that adhesion-induced wear on the cutting tool is significantly reduced when the magnetic field is applied to the cutting region.

The study of Bagchi and Ghosh gained the attention of other researchers globally. El Mansoria et al. designed an experimental test setup to investigate the effect of magnetic field on cutting tools and machining both non-ferromagnetic (304 L stainless steel) and ferromagnetic (carbon steel) workpieces with ferromagnetic HSS tool. In their experimental setup, a magnetic field was created by a coil which is integrated around the tool holder [2]. El Mansoria et al. found out that, at different cutting speeds, tool life increased about 30–40% for each workpiece. They also observed an increase in the temperature where a magnetic field has been implemented.

These findings with regards to increasing tool life during the machining process encouraged El Mansoria et al. to conduct further research in this topic [3]. In the new experimental setup, El Mansoria et al. investigated the magnetic field effect of machining on ferromagnetic AISI 1045 steel by using a non-ferromagnetic carbide tool in a dry environment. As a result of the experimental studies, they stated that the tool life increased approximately 2–3 times.

They claimed that the magnetic field increased the dislocation movement speed and the plastic deformation rate in the workpiece. However, they did not carry out a study to prove this increase or investigate the reasons behind it.

Anayet et al. have designed another experimental setup to investigate machining performance under the effect of the magnetic field on mild steels [5]. The magnetic field has been implemented by mounting magnets on the tool holder in the turning process. It was observed that there was a significant improvement in the machinability of mild steel when cutting with the magnet placed on the tool holder. They claimed that tool wear was reduced by approximately 25% and the quality of the machined surface was markedly improved when a magnetic field was applied.

Anayet et al. conducted another study on this subject with different materials [6]. In addition to the previous study, they have investigated the effects of magnetic field on machining performance for heat-treated steel. They found a significant increase in tool life and also an improvement in surface roughness by approximately 20%. In the studies performed by applying both heat treatment and magnetic field, they have observed a decrease in continuous chip formation.

Nadia et al. stated that the magnetic field increases the radial force, feed force and cutting forces and improves the tool life by approximately 20% during machining AISI 1018 low-carbon steel with carbide tool in a dry environment [7].

In the literature review, it was seen that the magnetic field was applied to the cutting region; however, there was no study on machining by using the permanent magnet tool.

In this study, the machining performance of the permanent magnet tool during the mild steel cutting was investigated.

In this study, unlike many studies conducted in the literature, instead of the external magnetic field assembly integrated into the machine tool, a rectifier and coil assembly which are completely independent of the machine tool were used in order to provide permanent magnetic characteristics to the cutting tool. With the rectifier and coil, the permanent magnet characteristic was given to the HSS cutting tool. In the experimental setup as shown in Figure 1, force and temperature measurements were made during the process with the help of a dynamometer (Kistler piezoelectric dynamometer-type 9257B) and laser thermometer (Optris Laser Sight IR) connected to the turning machine, and the wear on the free surface of the tool was measured by an optical microscope (SOIF model optical microscope having 1.0 µm precision OSM model ocular micrometer was used) after each 100 mm of cutting. 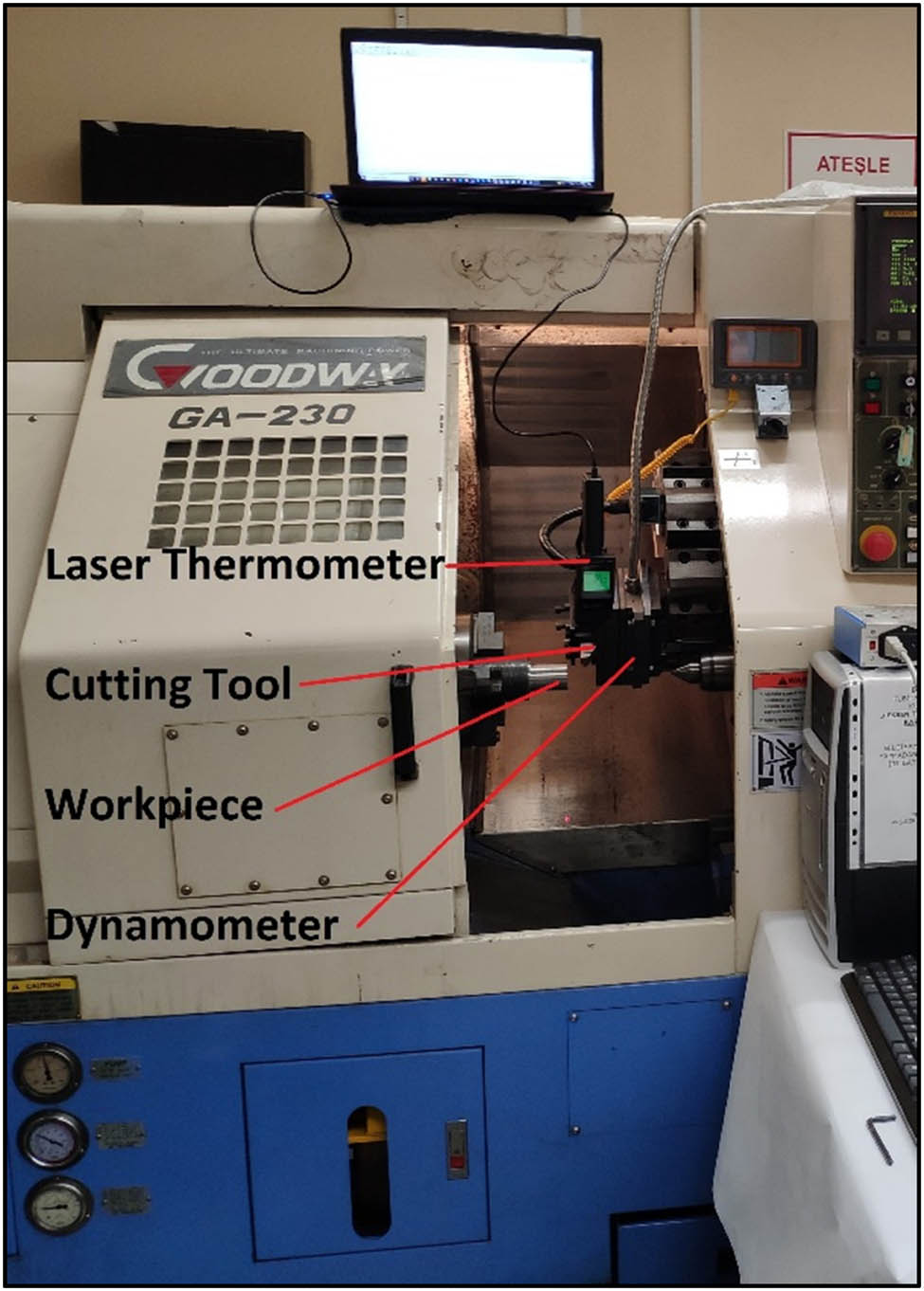 In experimental studies, the HSS turning cutting tool, and AISI 104 steel workpieces were used. The HSS tool was first used without applying a magnetic field and wear measurements were inspected. 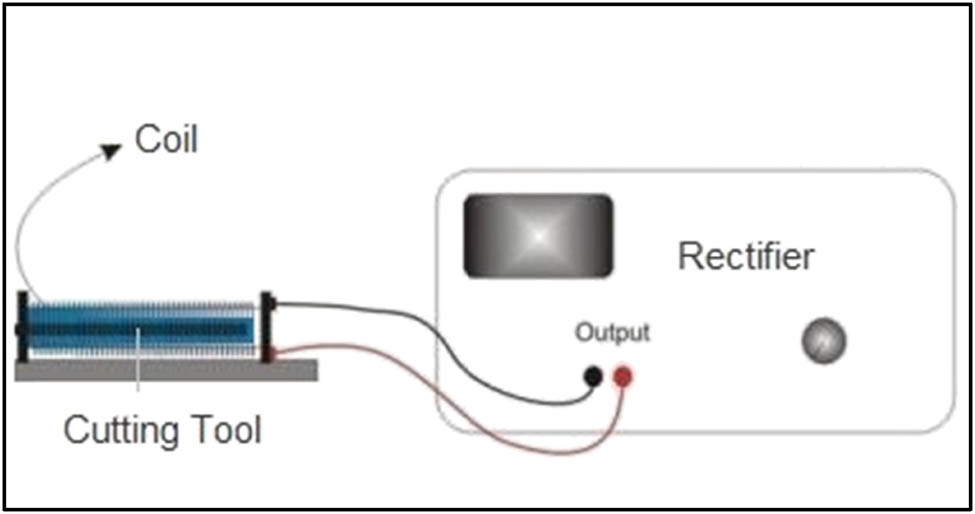 As a result of preliminary experiments, it was decided to apply the cutting parameters, which are displayed in Table 1 [2]. 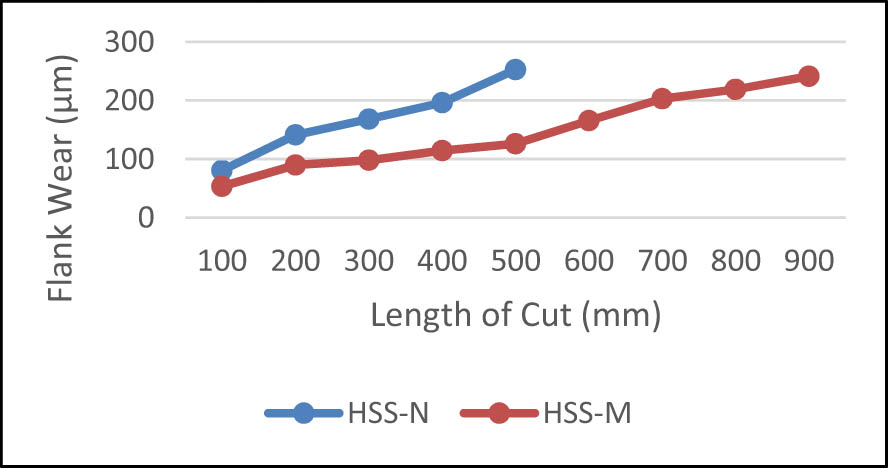 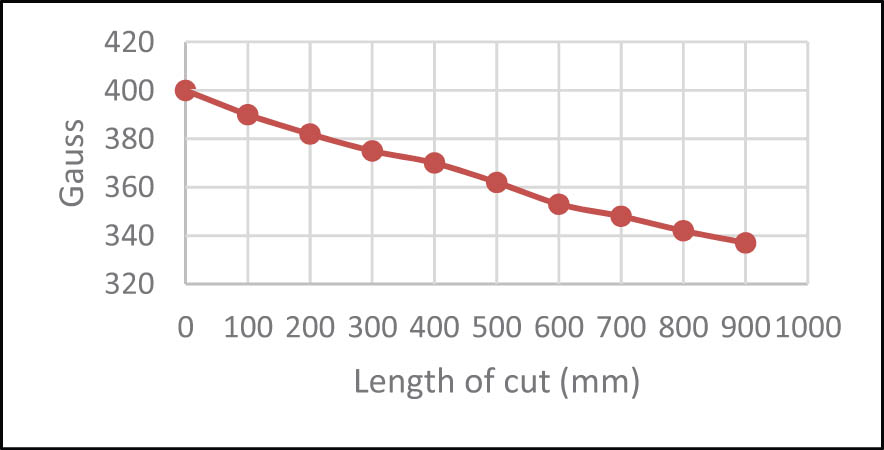 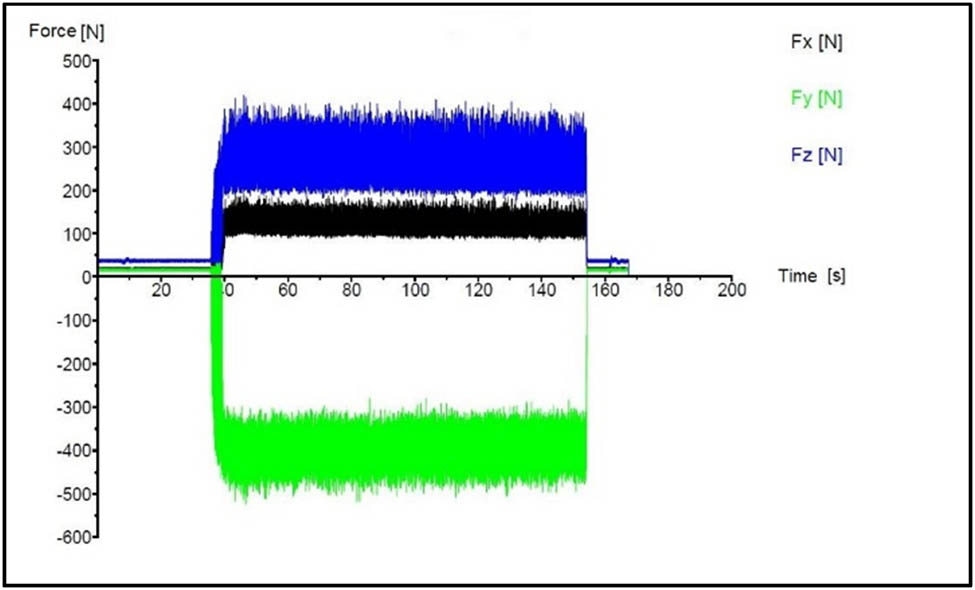 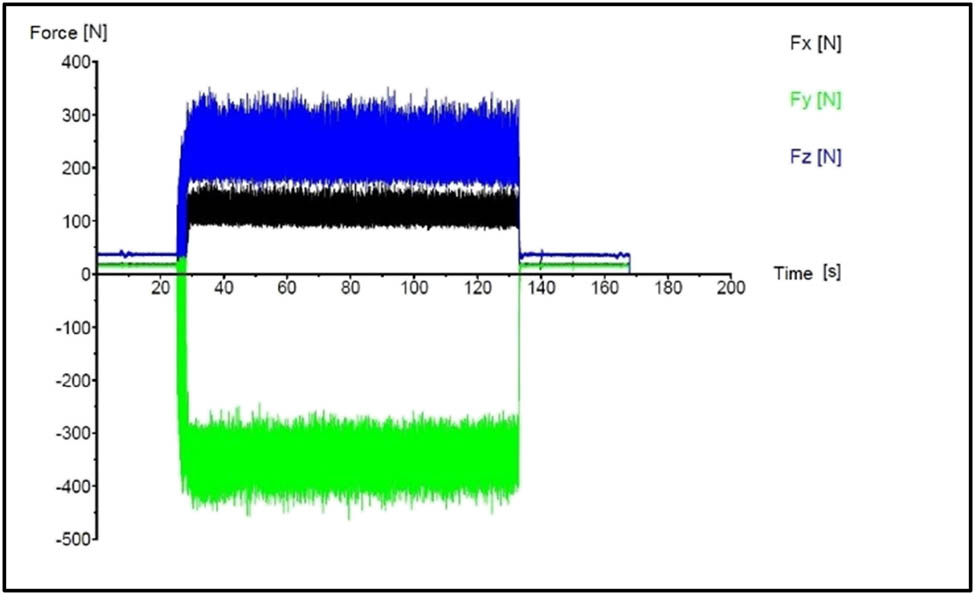 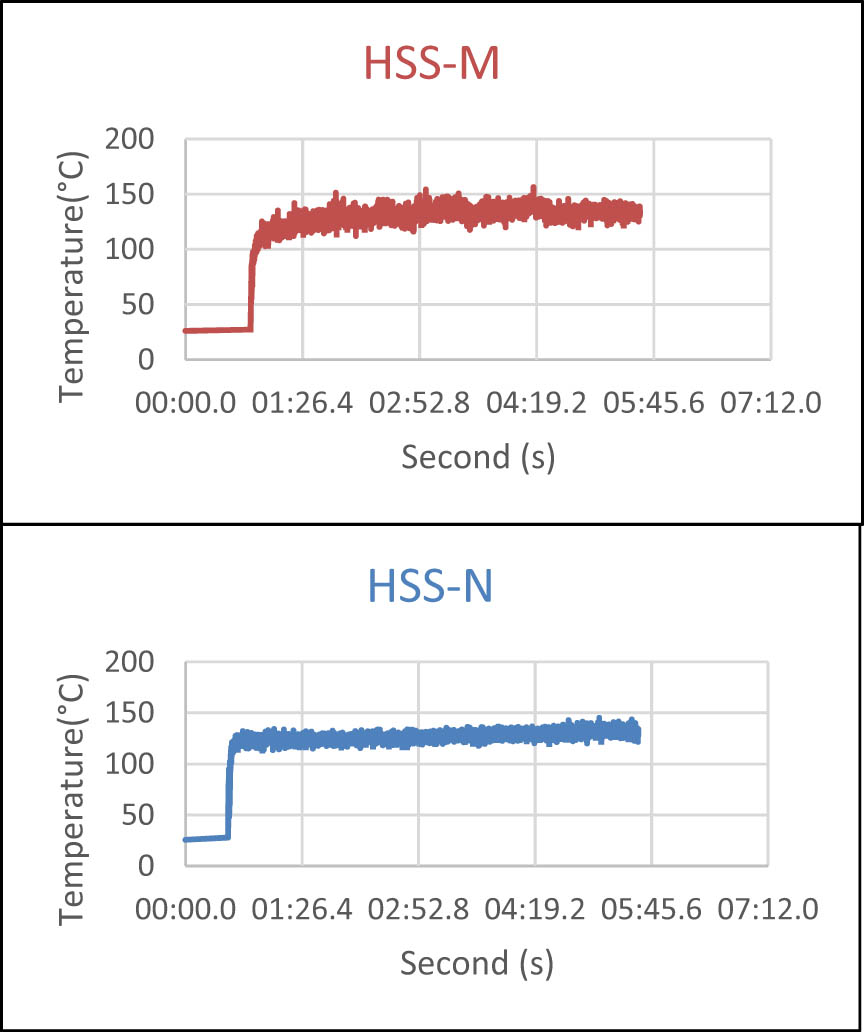 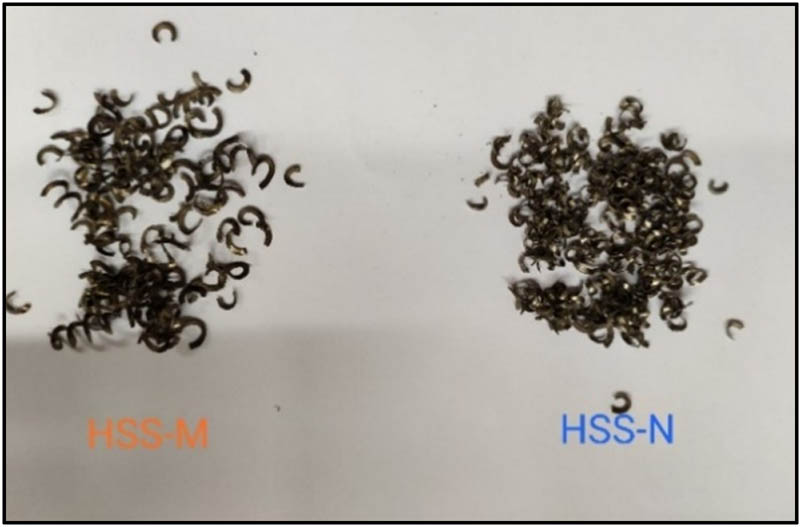 Chip forms obtained during cutting with magnet and non-magnetic tool.

This article discusses the influence of using the permanent magnet HSS cutting tool. The main conclusions of this research can be summarized as follows:

This work was supported by the Research Fund of the Yildiz Technical University [Project Number: FBA-2021-4043].

[1] Bagchi PK, Ghosh A. Mechanisms of cutting tool in the presence of a magnetic field. Indian J Technol. 1971;9:165–8.Search in Google Scholar