On the cold, rainy night of 5 December 2014, the Chemical Heritage Foundation (CHF) opened its latest exhibit, Books of Secrets: Writing and Reading Alchemy. Nearly 200 visitors braved the weather to see a selection of alchemical manuscripts, chosen primarily from a large collection CHF acquired in 2013, along with rarely seen alchemical paintings from CHF’s extensive fine-art collections.

James Voelkel, curator of rare books, and Amanda Shields, curator of fine art and registrar, co-curated the new exhibit. They designed Books of Secrets to appeal to those interested in books and manuscripts and fine art, as well as to attract those who are curious about all things alchemical. CHF’s recent acquisition of a trove of 15th-century manuscripts provided the opportunity to highlight the central role of the written word in the alchemical enterprise. Although alchemists did their work in the laboratory using furnaces and crucibles, reading, copying, and taking notes were also essential activities. The recipes and procedures detailed in the manuscripts were often written using coded language and symbols that enabled alchemists to hide their most precious theories from the uninitiated.

The books in the exhibit were chosen not just to showcase the alchemical manuscripts acquired by CHF in September 2013 but also to display printed books from CHF’s collection that complement the handwritten manuscripts, both in style and in subject matter. To further illustrate the importance of books in alchemical practice, several carefully selected 17th- to 19th-century Dutch genre paintings showing alchemists reading, jotting notes, and even standing with nose in book while stirring the contents of a crucible hang alongside the rare old manuscripts. These paintings from the Fisher and Eddleman Collections, some never before exhibited at CHF, bridge alchemists’ intellectual and practical pursuits.

Also highlighted is the craftsmanship required to create these early manuscripts, from the materials used in their construction to the symbols embedded in the recipes. A section of the exhibit titled “Printing” illustrates the continuity from manuscript to print traditions. Early printed books mirrored manuscripts in their conventions, such as placing publication information in colophons at the back of the book, and in their evidence of use, with similar marginal annotations in both printed and handwritten texts. CHF’s oldest printed book, a Latin Bible from 1478, is included because it closely resembles handmade manuscripts, most specifically Petrus Bonus’s Pretiosa margarita novella (The Precious New Pearl) in layout, color, and typography. 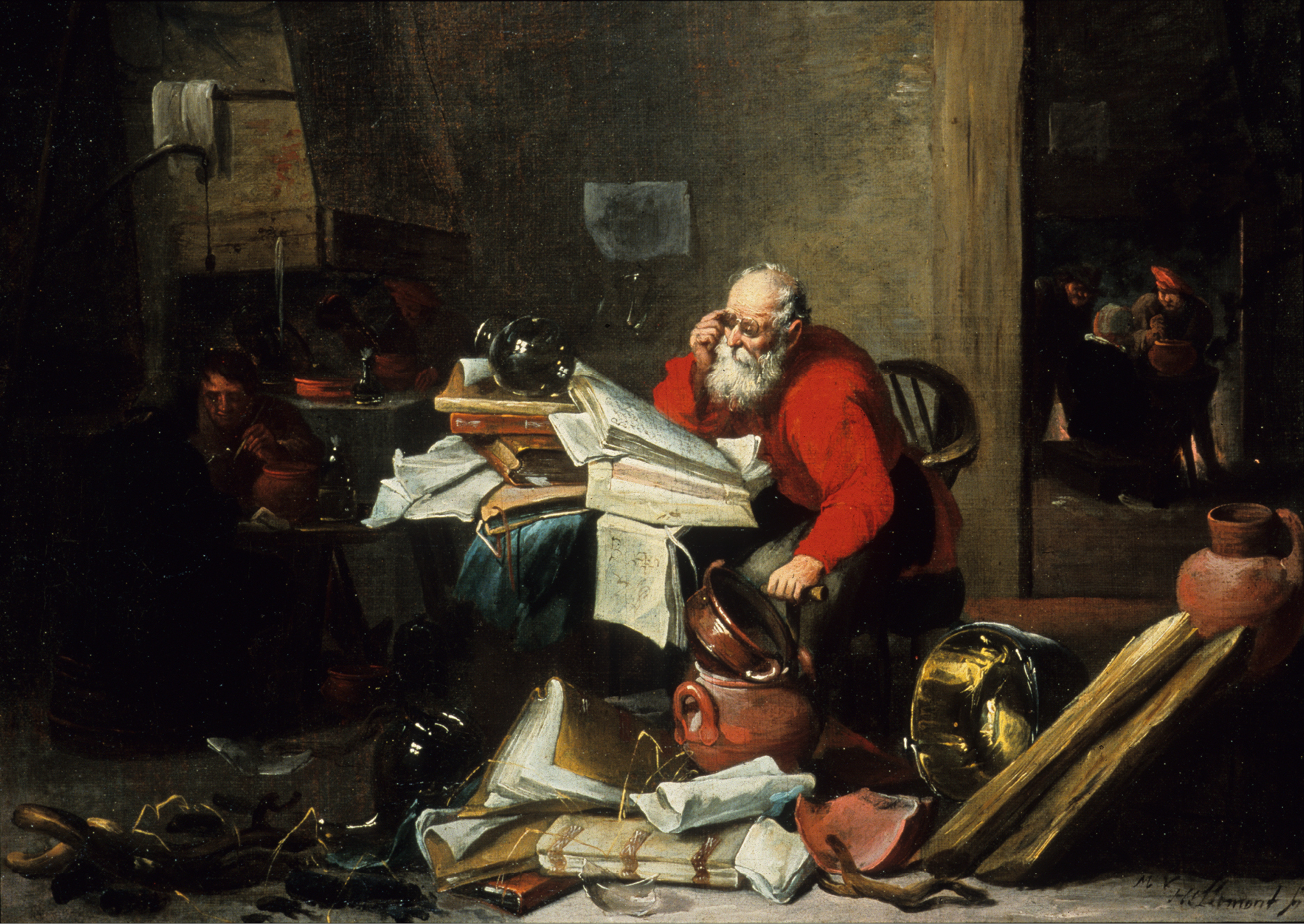 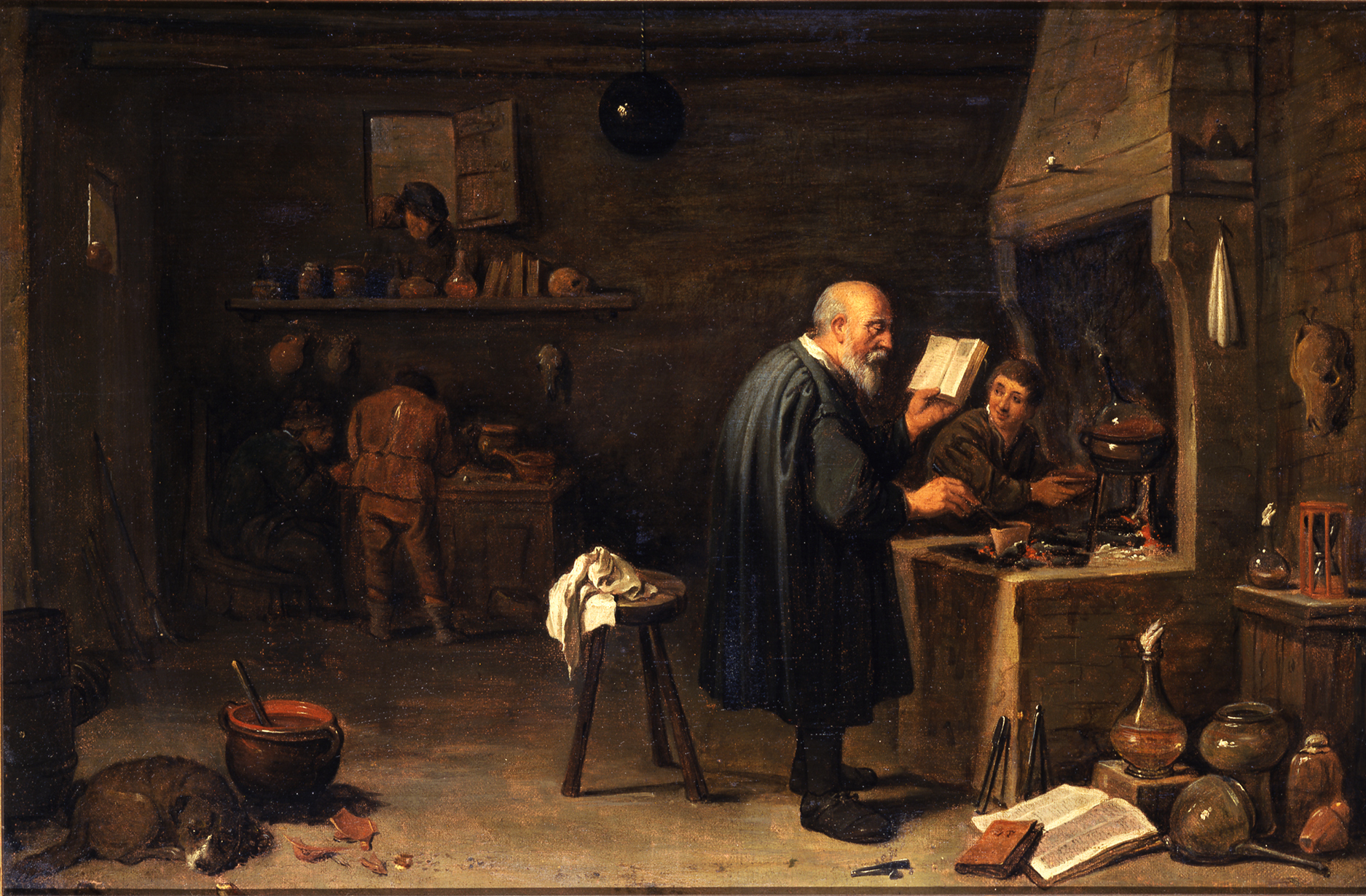 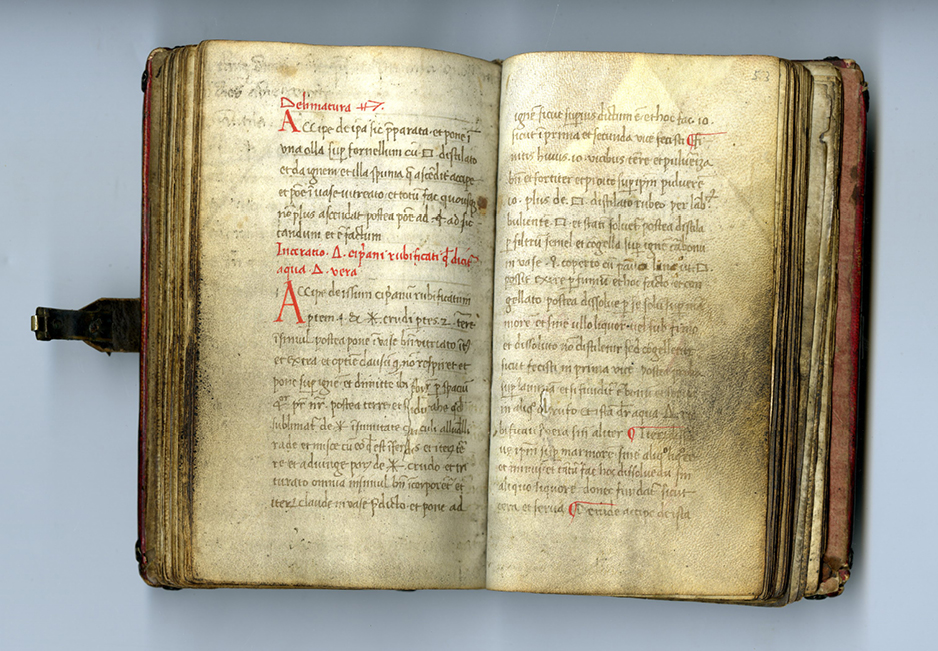 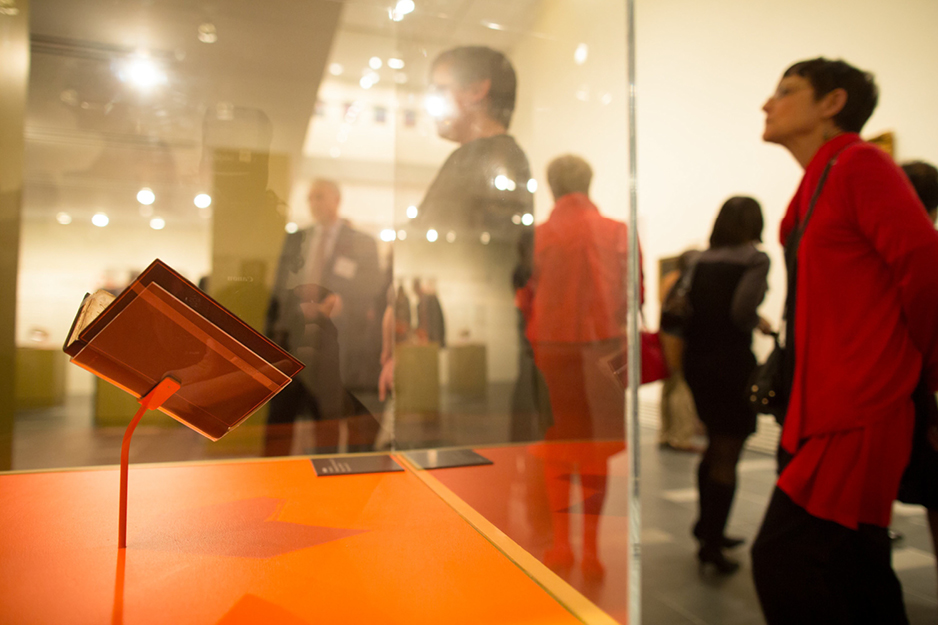 The paintings, ranging from 17th- to 19th-century works, show the progression of artists’ depictions of how alchemists used recipes, manuscripts, and, later, printed books to accomplish their tasks, whether attempting to transmute metals into gold or preparing dyes and medicines. For example, The Bald-Headed Alchemist by David Teniers II, which presents an alchemist at his furnace stirring a crucible while reading a manuscript, is directly paired with soot-covered alchemical miscellany. This pairing allows visitors to connect the soot stains on the manuscript with the image in the painting. Visitors can also see how artists’ views of alchemists changed over time: earlier paintings commonly show alchemists as unkempt fools and quacks, while many later paintings portray them as well-groomed scholars.

Thirty objects from the collections at CHF are on display. Included are nine manuscripts and three illuminated miniatures acquired in 2013, and five printed books, four of which are from the Roy G. Neville Historical Chemical Library, with the fifth, a gift from Alfred Bader, a part of the Othmer Library collection. In addition to the manuscripts, 13 paintings are hung on the Hach Gallery walls. Four are from the Fisher Collection and nine are from the Eddleman Collection.

This exhibit continues CHF’s effort to communicate the importance of science and technology to the general public. Not only will regular visitors to CHF be engaged by this exhibit, but those visitors curious about rare books and manuscripts, calligraphy, and paleography will see important objects in their areas of interest. Those particularly interested in fine art, especially Dutch genre painting and material culture, will also get a glimpse of one of the largest collections of alchemical paintings in the world.

Books of Secrets will be on display in CHF’s Hach Gallery through 4 September 2015. The Museum at CHF is open from 10:00 a.m. to 5:00 p.m. Monday through Friday and open until 8:00 p.m. on the First Friday of every month. Group tours are available. The museum is often open later for CHF award events and public lectures. If you are attending an event at CHF and would like to visit the museum, please contact the event staff to confirm the museum hours for that event. 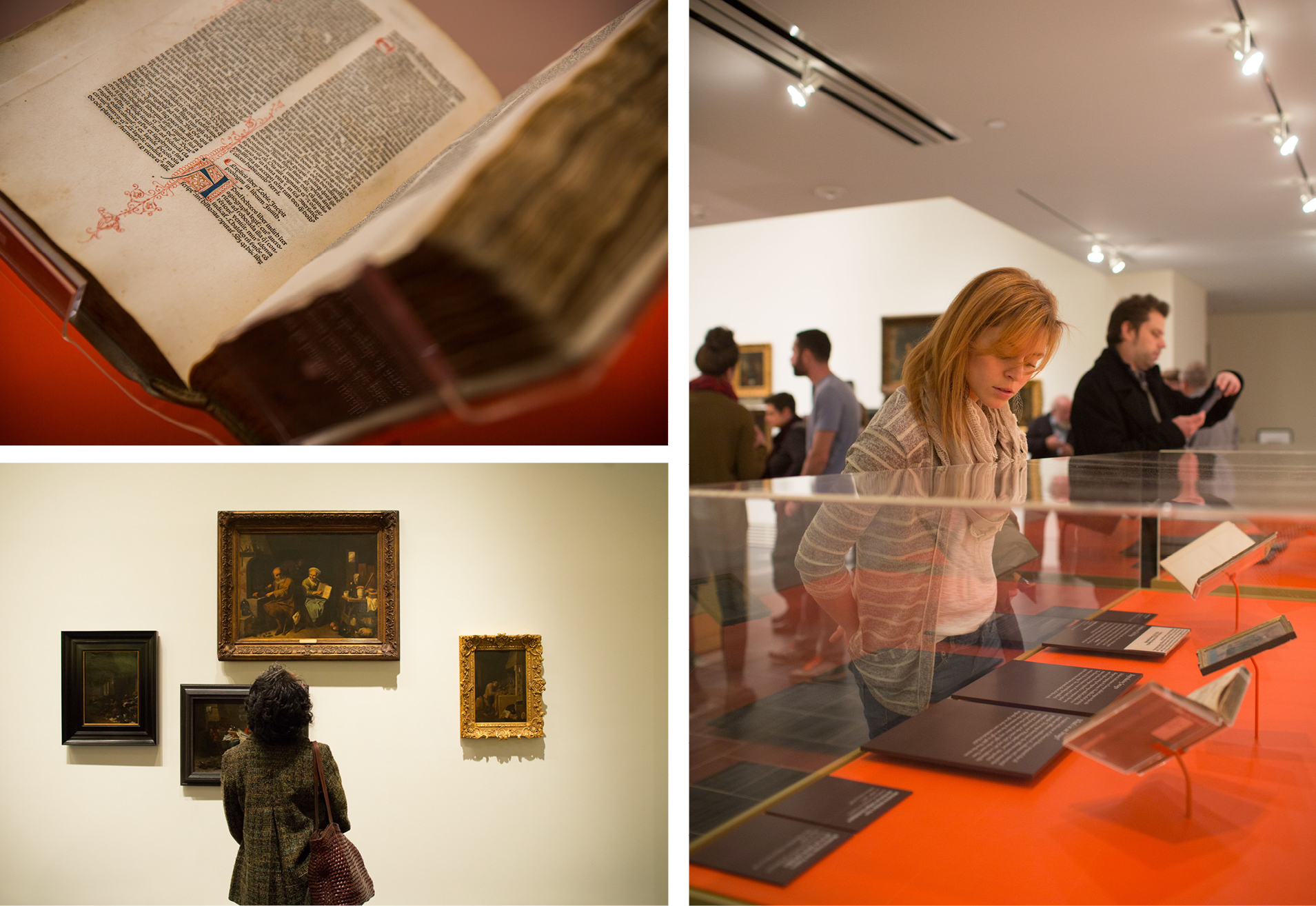 Museumgoers examine the numerous paintings and manuscripts on display at the exhibit opening on Friday, 5 December 2014. Photographs by Conrad Erb

Masthead - Full issue pdf
The First IUPAC Congress in Korea
Books of Secrets: Writing & Reading Alchemy
What's in a Name? Quite a Lot, as it Happens!
Systematic Flexibility and the History of the IUPAC Nomenclature of Organic Chemistry
Election of IUPAC Officers and Bureau Members – Call for Nominations
ICSU announces Dr. Heide Hackmann to be Executive Director and Dr. Lucilla Spini to be Head of Science Programmes
Measurements and Light
OPCW-The Hague Award Presented at 19th Conference of States Parties
The 2014 AAAS Award for Science Diplomacy goes to Zafra M. Lerman
See more...