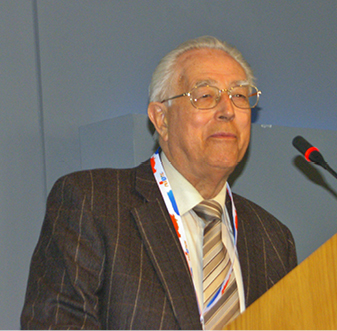 Former colleagues in the Polymer Division were deeply saddened to learn of the sudden and untimely death of Professor Bob Stepto on 13 September 2015. Bob became a towering figure within the Polymer Division (formerly the Macromolecular Division) after joining IUPAC as an Associate Member in 1987. By 1989 he was a full Titular Member. He assumed the Chairmanship of the Commission on Macromolecular Nomenclature in 1992, became the vice-president of the division in 1999, then president in 2002, a position he held until 2005. Throughout this period and beyond, he worked tirelessly to establish proper polymer terminology and nomenclature, and more generally for the benefit of chemistry and mankind.

An only son, Bob was born on 13 November 1937 and attended Sutton Grammar School in the suburbs of London before going to the University in Bristol in 1955 to study chemistry. On graduating in 1958, his delight in physical chemistry by then well established, Bob remained at Bristol and with the award of a scholarship continued his studies. Researching the diffusion of polymers in solution, he gained a PhD in 1962. Thereafter polymer science was to be his scientific raison d’être, but it was also at Bristol that Bob met and married Joan, who was to become a pillar of support throughout his distinguished career.

In 1961 Bob and Joan moved to Manchester, where, as a research fellow in the University of Manchester Institute of Science and Technology (UMIST) working on the crosslinking of polymers, Bob initiated studies on gelation and intramolecular interactions during polymerization. In 1963 he was appointed Assistant Lecturer in the Department of Polymer and Fibre Science and, following a number of promotions, had by 1979 become Reader in Polymer Science and Technology. Over the course of the intervening years he developed an internationally recognised research group in polymer gelation, polymer networks, and polymer chain and polymerization statistics. Having a sound background in mathematical methods applied to scientific problems, he also immediately grasped the opportunities presented by the use of modern computational methods, not only to theoretical studies, but also to the visualisation of polymer chain behaviour.

In 1985 Bob took an extended leave of absence from UMIST to spend three years in Switzerland as Vice-Director of Research and Development for Capsugel. Having made the switch to polymer processing, by 1986 his research there resulted in his receiving the Interfex Award for Innovation in Production in the Pharmaceutical Industry. In 1988, he returned to a restructured UMIST and the subsequent merger of his department with the Departments of Metallurgy and Materials Science of both Manchester University and UMIST, into what was to become the Manchester Materials Science Centre. In the same year he was awarded the degree of DSc by Manchester University. In 1992 he was promoted to Professor of Polymer Science and in 1998 became head of his department.

There are more than 300 publications in Bob’s name, half resulting from invited lectures, commemorative issues of journals, books, and chapters in books. More than 20 are cited specifically as top-20 publications in the Résumé of Achievements in Research. He has supervised more than 40 research degrees and collaborated widely with other eminent scientists in polymer science and technology, even after he had retired from full-time academic service. Added to his academic output, there are eight patents resulting from just the three years he spent in Switzerland.

Through the application of experimental, theoretical and computer modelling to the formation, structure and properties of polymer networks, Bob made huge advances towards understanding the role of intramolecular reaction during the formation of polymer networks. His interpretation of theories of gelation enabled more accurate predictions of gel points. The Stanford-Stepto Statistical Rate Theory of Gelation of the 1970’s, the Ahmad-Rolfe-Stepto Theory of the 1990’s and the Monte-Carlo Algorithm of the 2000’s all follow from Bob’s pioneering work, resulting in the most complete simulations of network-forming polymerisations and gelation to date. His other notable research activities included studies of polymer solutions and the application of computational methods in theoretical studies, producing not only many papers but also a series of highly-imaginative visual displays of polymer chain behaviour.

A further important feature of Bob’s career has been his work on behalf of learned and professional societies and, most notably of course, the activities of IUPAC. Were it not for his deft and diplomatic handling of the changes that affected the Polymer Division in 2001 following from the inception of Division VIII, there could have been a total collapse of very effective international working relationships that are of enormous benefit to polymer nomenclature and terminology. He worked assiduously on projects and, when requested, tendered advice to those of lesser experience with our weird and wonderful ways. To me personally, and no doubt to others, he was a mentor—his service to IUPAC and the members of our division continued until the end. In total, over the years Bob has led or contributed to 23 projects that have reached completion and was still involved with five others at the time of his death. As we well know, IUPAC projects are painstaking and can take years to reach fruition, but only a week or so before his passing he confirmed to me his wish to be a member of yet another new project working party.

At Bob’s side throughout his long and illustrious career has been Joan. Of equal importance has been their strong and committed family life, to which their two sons, Jon and Paul, and their grandchildren are central. Their many friends will testify to the warm welcome afforded them by the Stepto family. Bob is sadly missed by many, not the least in number being the friends and colleagues, young and old, with whom he worked during his 28 years of service to IUPAC.