A project has been initiated under the Subcommittee of Polymer Terminology (SPT) in the Polymer Division entitled “The Brief Guide to Polymerization Terminology”. The project aims to produce a short summary of existing documents related to polymerization terminology in a form that can be readily disseminated and is publicly accessible by students and researchers. The rationale behind the Brief Guide is that, while fully elaborated IUPAC recommendations on polymerization terminology exist, confusion still remains in the field. Many researchers and students using a variety of different terms for the same concept, some of which are incorrect or misleading based on the current understanding of polymerizations. We aim to bridge the gulf between IUPAC recommendations and scientific/educational use of terms so that we can all speak the same language when referring to concepts related to polymerization.

While SPT has developed rich terminology that communicates state-of-the-art, precise understanding of polymerizations, there are relatively few publishing academic scientists who use such terms. Examples of such terms include “polydispersity index” instead of “dispersity”; “chain-growth” instead of “chain polymerization”; “step-growth” instead of “polycondensation”; and the frequently incorrectly used term “living polymerization”. This is all the more surprising given the extremely high value of such understanding to the worldwide industrial development of advanced polymer-based materials. The SPT has coined terms that both communicate and encapsulate complex concepts in a self-explanatory manner. All their publications are freely accessible, and can be reprinted in whole without constraint. However, few working publishers, scientists, students, industrialists, educators, and authors know where to obtain, how to use, and distribute this work. Our goal is to create an easily accessible and portable document to discourage the use of misleading terms.

This project will address this problem by delivering a short (two-page) document that explains and summarizes the most important terms, and will provide active hyperlinks that will link directly to the original source documents. Liberal use of links to the IUPAC color books will also be made so that any word that might cause confusion to a novice reader will be clarified. In effect, this short guide will provide a robust stairway for users to quickly gain a working knowledge of the concepts and terminology surrounding polymer chemistry today. This project is now all the more important given the incredible explosion in polymerization techniques over the last twenty or so years, thus requiring correct terminology to distinguish the variant methodologies. 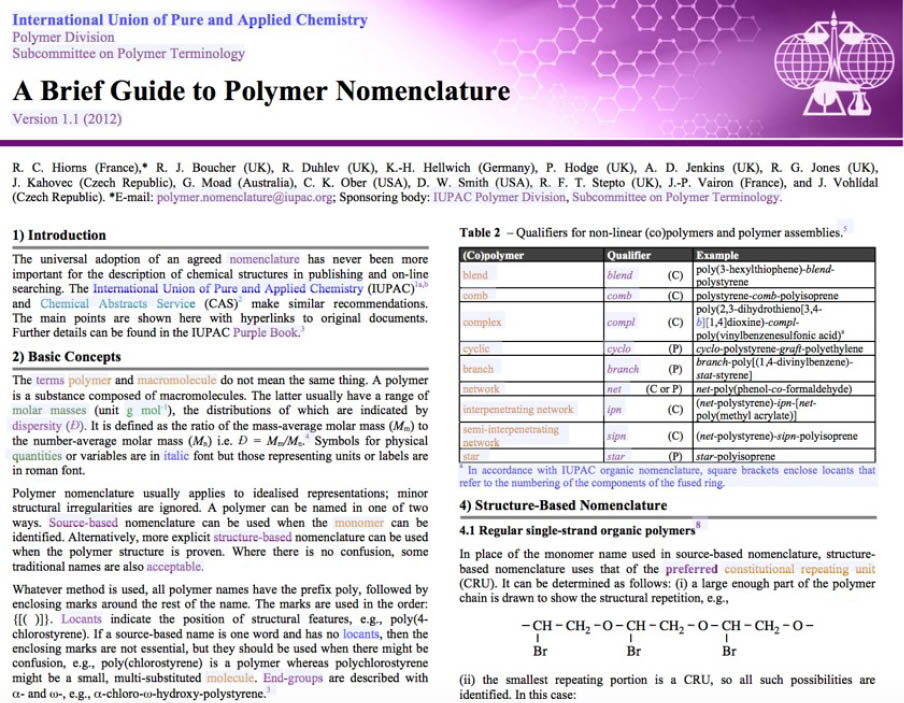 This project follows the recently completed and high impact project ‘A brief guide to polymer nomenclature’ Pure Appl. Chem. 84, 2167-2169 (2012). The proposed Brief Guide for Polymerizations will follow a similar format.

The terms to be used in the proposed Brief Guide for Polymerizations will be heavily based on recommendations from three projects: “Basic classification and definitions of polymerization reactions (IUPAC Recommendations 1994)”, Pure Appl. Chem. 66, 2483-2486 (1994); “Glossary of terms related to kinetics, thermodynamics, and mechanisms of polymerization”, Pure Appl. Chem. 80, 2163-2193 (2008); and the ongoing project 2010-007-1400 entitled “Terminology for Chain Polymerization”. The work will begin by identifying the most important terms described in these two documents/three projects. Finally, a project web page will be set up such that updated versions of the document can be downloaded in subsequent years. The resulting Brief Guide will be shared with a number of leading publishers that carry polymer journals including Nature, ACS, RSC, and Wiley.