The Lost Elements: the Periodic Table’s Shadow Side

Chalk, salt, and sugar are all white powders, yet very different from one another. What makes them different? Many great minds have pondered the ultimate constitution of matter. Aristotle pointed out in Metaphysics that most philosophers agree that matter consists of some primary principles, elements, but they do not all agree as to the number and the nature of these principles. Aristotle believed that all bodies are made of four principles, earth, water, air, fire, whereas European alchemists, such as Paracelsus, considered all bodies to be made of three principles—sulfur, mercury, salt. The modern concept of the chemical element was articulated by Antoine Lavoisier in 1789 and chemists have been wondering how many elements there are ever since. The hunt to discover new elements has become an integral part of chemistry, and it continues even to this day. Remembering the names of all known elements has become increasingly more difficult over the years: in 1789 Lavoisier gave a list of 33 elements, Mendeleev’s first Table featured almost twice that number, and today we have official names for 114. 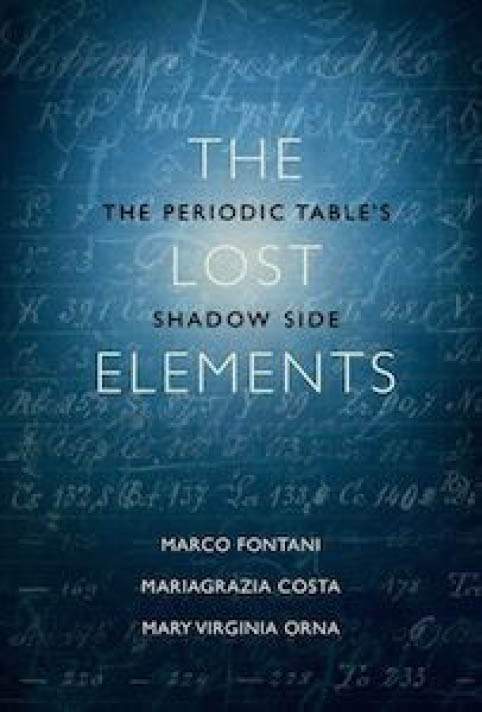 Science, however, does not always gets things right at first, and with each true discovery of an element there are a couple of false starts. The stories behind the false discoveries can be as interesting as the real discoveries and they offer a rare glimpse into the inner machinery of science, which does not lack corruption, vanity, or ego. The Lost Elements is the result of almost two decades of dedicated research and it draws its sources from old newspapers, personal interviews, and even obscure Vatican newsletters. A detailed chronicle of false scientific discoveries might seem pointless at first, yet it is a treasure to anyone interested in how science actually works.

This book guides us through some hundred remarkable stories. In the late 19th century, the discovery of new elements was a mass phenomenon. Some were even “discovered” by clairvoyant means and, as irony would have it, Charles Baskerville—the man who wrote the first authoritative account on the subject of false discoveries—also contributed two false elements of his own. To think, however, that false discoveries of chemical elements are only made by scientists of lesser caliber would be a mistake. One of the leading chemists of the Victorian era, Sir William Crookes, discovered thallium but could not escape adding several false discoveries to his name. Mendeleev himself is remembered for his stellar predictions of the yet-undiscovered elements gallium, germanium, and scandium, and historians usually downplay his two false elements with atomic weights lower than hydrogen and his six new elements between hydrogen and lithium. In fact, only half of all Mendeleev’s predictions turned out to be true. When the 1938 Nobel Prize in Physics was awarded to Enrico Fermi, the Chairman of the Nobel Committee for Physics commented that “Fermi even succeeded in producing two new elements, 93 and 94 in rank number. These new elements he called Ausenium and Hesperium.” Needless to mention, these two elements turned out to be false. The Lost Elements is an authoritative compendium of many more fascinating accounts of the false discoveries of chemical elements.

The discovery of elements is inevitably intertwined with the determination of their atomic weights, and the International Committee on Atomic Weights has had its fair share of affairs in this regard. Marie Curie put great importance on the determination of the atomic weight of the newly-discovered radium to unambiguously identify it as a new element. Yet determination of the atomic weight is not as trivial as it might sound. In fact, many false discoveries were made precisely because of the errors in determining atomic weights. This book demonstrates that chemists were often oblivious to the difficulties in determining accurate atomic weights. Similar repercussions were witnessed in the late 19th century, when researchers relied heavily on the newly introduced spectroscopy methods to identify new elements: the extreme reliance on spectral lines and their wavelengths brought as much trouble as did the overt reliance on rushed atomic weight measurements.

New chemical elements almost invariably are discovered not by a single scientist, but by several researchers. It is natural to expect that everyone involved wants to get the sole credit and the naming rights. For science this means chaos. We can muse, Stephen Colbert style, that the United States of America could have been named the United States of Vespuccia. Similarly, many elements came close to being christened with quite different names. Uranium, for example, was slated to honor the name of its discoverer, Heinrich Klaproth, and not a newly-discovered planet, and barium was almost renamed plutonium. Who knows, perhaps there is an alternate world where the doctor gives you plutonium sulfate before an X-ray examination and newspapers discuss the recent developments in klaprothium enrichment. The desire to discover chemical elements has prompted many scientists to rush their work, publish the preliminary findings, and suggest the name of the new element before others confirm the discovery. In fact, Chemical News became a magnet for rushed announcements, often facilitated by editors. What possible harm could there be if the findings later turn out false? For one, the suggested name becomes tainted because most scientists would not want to recycle someone else’s name for a once-in-a-lifetime event. No one wants to buy a used wedding dress for the big occasion if a new one can be afforded. In fact, some fear that, because of this, many great scientists are no longer eligible for element names: Lavoisier, Berzelius, Newton, or Moseley. In fact, element 102 (nobelium) came close to being renamed after its discovery was reassigned to another research group, but the rightful discoverers decided to keep the name already suggested. There are, however, examples where good science prevails and the naming of an element does not eclipse the science. Technetium and astatine are examples to this.

As exemplified by the French chemist Georges Urbain, this book honors the legacy of many great scientists who quickly fell into oblivion. This tome of 500+ pages could not be without its shortcomings. Sometimes authors digress, as in the unnecessary chapter on the birth of homeopathy. The book also perpetuates the popular myth that Mendeleev introduced new standards for the production of vodka and that flerovium is said to be named after Georgii Flerov. The latter is named after the institute which bears Flerov’s name. This distinction might seem insignificant, but it becomes important when deciding which elements are actually named after persons. Is samarium and gadolinium on that list? I will let you decide.

One might summarize that this book tells the story of science behind the curtains and its authors offer plenty of drama on par with today’s reality television shows. For example, deciding the credit for the discovery of actinium reads like the scientific version of Aesop’s fable The Frog and the Mouse. Marie Curie’s assistant André Debierne refused to allow Curie’s daughter Irène Joliot-Curie to be credited as a co-discoverer along with himself and Perey. Outcome? Perey got the sole credit. With 100+ other entertaining stories to tell, this book will not disappoint.

Article The Lost Elements: the Periodic Table’s Shadow Side