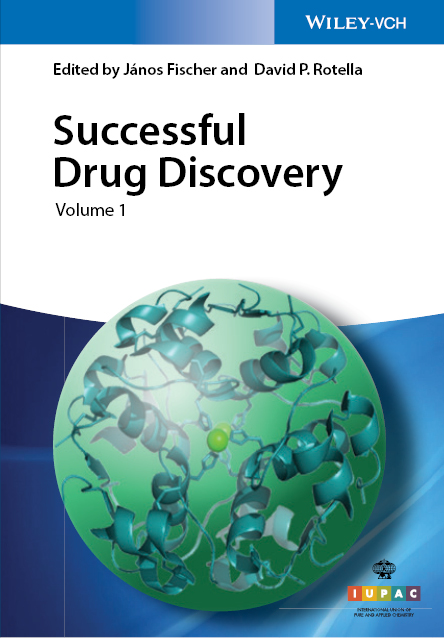 This book is the outcome of IUPAC project 2013-016-1-700 (www.iupac.org/project/2013-016-1-700); it is the first volume of a reference series designed to support teaching in medicinal chemistry with case histories and review articles of new drugs.

Drug Discovery research is an endeavor marked most often by failure. Many scientists, especially medicinal chemists, can spend their entire careers working productively on programs that do not result in a launched drug. The title of this book focuses, therefore, on the rarest of characteristics for this field—success. The book has three sections: General Aspects, Drug Class, and Case Histories. Overall, it provides a blend of information which is useful to both experienced researchers and those new to the field.

Section I includes two chapters, the first of which, co-written by both editors, summarizes recent drug discovery efforts. It describes how, in spite of efforts to rationally design drugs based on a molecular target and a “known” mode of action, many successful drugs are the result of serendipitous findings. The majority of the 8 drugs whose discoveries are summarized in the chapter have some link to serendipity. A key learning is that researchers should be open to the unexpected, e.g., if they get an unanticipated product, perhaps they should test it anyway. In other cases, following the initial lead molecule for a specific drug target ends up producing a final drug candidate that works at a different target, via a different mechanism of action. An example of the latter was provided in the summary on the discovery of drospirenone. Administration of a potent mineralocorticoid spirorenone to men resulted in a surprising drop in testosterone levels. This was determined to be due to a species-specific (in human and monkeys) metabolic transformation of spirorenone to drospirenone. Dropirenone was determined to be a progestin with anti-androgen properties and it has since been developed as a contraceptive and for use as a post-menopausal hormonal replacement therapy.

The second chapter in this Section, by D.C. Swinney, targets the role of molecular mechanisms of action (MMOA) in drug discovery. In this Chapter Dr. Swinney describes how knowledge of IC50 and Ki at a particular target only provides some of the information needed to understand an MMOA. He clearly presents the assumptions underlying target-based approaches and briefly touches upon the analyses that he and others have done comparing such an approach with one based on phenotypic screening. That analysis clearly shows the benefit of the latter for first-in-class drugs, whereas for best-in-class a target-based approach is more effective. He uses artemisinin as an example of a first-in-class drug which he thinks could have been developed via a target-based approach.

Section II is made up of one chapter, by J. M. Beals, which is an overview of the development of insulin analogs as therapies for diabetes. It begins with a discussion of the biosynthesis of insulin and its role in normophysiology. Importantly, it includes a description of both basal and prandial [post-meal] insulin and how insulin levels vary over time. The chapter describes how insulin is stabilized by the formation of a zinc-associated hexamer and how an understanding of the role that multimers play in maintaining insulin levels was critical to the development of newer modified insulins. These have been designed to be either rapid but short-acting or slower and verylong-acting, based in part on their ability to form stable complexes. Overall, this chapter serves as an excellent, easily readable introduction to the area.

Section III is by far the largest part of the book and is composed of eight chapters that are case studies of the development of specific drugs. These drugs range broadly, from orally-active, low molecular weight enzyme inhibitors, to high molecular weight antibody drug conjugates. In each chapter the authors highlight different aspects of the drug discovery process. Although only some of the chapters are summarized below, each offers unique insights into the drug discovery process.

For example, in Chapter 4, the discovery of avandafil for the treatment of erectile dysfunction (ED) is described by a team from Mitsubishi-Tanabe. Although the first PDE5-based ED treatment [sildenafil] was discovered serendipitously, the goal of the Mitsubishi-Tanabe team was to develop a “best-in-class” agent. The authors carefully describe how they set their goals and how they wished to differentiate their product, on the basis of selectivity and PK parameters. They wanted to avoid the ocular side effects known with the existing agents and create a compound that would have a very rapid onset followed by a limited duration of action. Although the team succeeded in delivering their desired profile and avandafil is an approved product, the reviewer is curious to see how “commercially” successful their product proves over time. The marketers of some of the existing compounds have recently changed their strategy to emphasize their long duration of action [“you will always be ready”], converting what was viewed as a weakness in the existing products by the design team into a potential strength.

Chapter 5 by W. Washburn describes the development of dapagliflozin, a SGLT2 inhibitor, for the treatment of diabetes. In this case, although it is a first-in-class drug, target-based screens acting via a known MOA were chosen. In part, this was because strong target selection and validation information was available via the identification of individuals with either nonfunctional SGLT1 or SGLT2 transporters. Their phenotypes clearly indicated that selective SGLT2 inhibition would be needed for a safe and effective drug. The author describes how serendipity, following up on the products of a reaction that did not yield the desired structure, led to the discovery of the key C-glucoside type compounds. He also details the important roles of the scientist in defining what were the optimal physical properties needed to maximize in vivo efficacy, and of the medicinal chemist in preparing analogs designed to retain potency and fit certain physical property criteria (e.g. protein binding).

The remaining chapters each exemplify concepts that are important in successful drug discovery efforts. Chapter 6, on elvitgeravir, provides an example of the role of bioisosteres in SAR exploration. Chapter 7, on the development of linagliptin, illustrates the importance of HTS as a means of providing a lead. It also includes a detailed description of significant scaffold-hoping efforts. In the end, the original scaffold was the best, although structural modifications result in a 4000 fold increase in potency from the HTS his to linagliptin. In Chapter 8, Prof. E. C. Taylor describes the discovery of permetrexed and how in its development the most potent analog was the first compound made. The need to meet other criteria led to continued efforts, and it was only by “violating” one of the conclusions delivered by their detailed SAR, “Ring B cannot be aromatic,” that he ended up discovering the series/compound that led to permetrexed. Chapter 9, written by a Vertex team on the discovery and development of telaprevir, is an excellent description of a structure-based design program. It also highlights how rapidly science can progress once a clear path has been laid. Telaprevir went from being a first-in-class breakthrough agent to outdated and essentially no longer used in just a few years when more effective agents with a simpler pill burden, once a day dosing, and no food interaction became available. Chapter 11, the last chapter, describes the development of trastuzumab emtansine, one of the first antibody drug conjugates. These are complex large compounds that combine a cytotoxic payload via a linker to a target directing monoclonal antibody. Ideally, the linker cleaves inside the target cell, releasing the cytotoxic agent in a targeted manner. This chapter describes some of the unique issues in melding a biologic agent with a low molecular weight drug molecule.

Because of the manner in which this book combines basic broad concepts (Section I), a detailed overview of an class of molecules (Section II), and narrowly focused case studies (Section III), it would be a valuable addition to the library of any group doing drug discovery and development.