Sustainable Development, Solar Cells, Light Harvesting, 2D Crystals, Synthetic Strategies, Single Cell Analysis, Transcription, Photochemical Process, and Cross-coupling Reactions—these are a few keywords emphasized by the plenary lecturers of the 45th IUPAC World Chemistry Congress (IUPAC-2015). It was held from 9 to 14 August in Busan, the largest harbor city in Korea, and was notable for being the first time that the IUPAC Congress took place on the Korean peninsula. Smart Chemistry, Better Life was the theme, under which the Korean Chemical Society and the Organizing Committee of IUPAC-2015 ensured the success of the Congress. While numbers do not fully capture this success, the Congress attracted a total of 3620 participants, from 74 countries, and 2611 papers were presented.

The plenary lecturers were as follows:

The scientific program of the Congress also offered 131 symposia in 20 concurrent sessions. Papers were presented in the following areas, covering a diverse field of chemical sciences:

The Korean organizing committee members responsible for the IUPAC-2015 prepared for this event since 2009, when IUPAC approved the Korean plan to host this internationally prestigious event. Much dedicated effort successfully turned the Congress into one of the finest and best-prepared international conferences in recent years. All the participants were pleased with the harmonious and smooth management during the Congress and fully enjoyed the beauty of the city and the hospitality offered by the people of Busan and Korea. The venue, BEXCO, provided a comfortable and optimized environment for the Congress.

In the Opening Ceremony, Hong-Seok Kim, president of the Korean Chemical Society, said “One of the main goals of the Congress is to emphasize the central role of chemistry and promote collaboration in chemistry and related fields between Koreans and the world. And we have been excited and have been waiting for welcoming participants from all over the world.” Myung Soo Kim, chair of the IUPAC-2015 organizing committee, was pleased to say, “It is surely our delight to host the IUPAC-2015. It is a precious opportunity to show the excellence of Korea’s chemical industry and enhanced levels of Korea’s chemical researches. I am sure that IUPAC-2015 will provide the appropriate forum to promote innovation in chemistry and related fields all over the world”.

The exhibition area, located on the first floor of the exhibition center, featured several islands and many other booths. The poster presentation and the exhibition were designed to take place at the same site. This arrangement enabled all of the participants from industry and academia to share the exhilarating academic discussions as well as the exhibited products. Three poster sessions, which were held on three evenings, were also appreciated by the visitors. 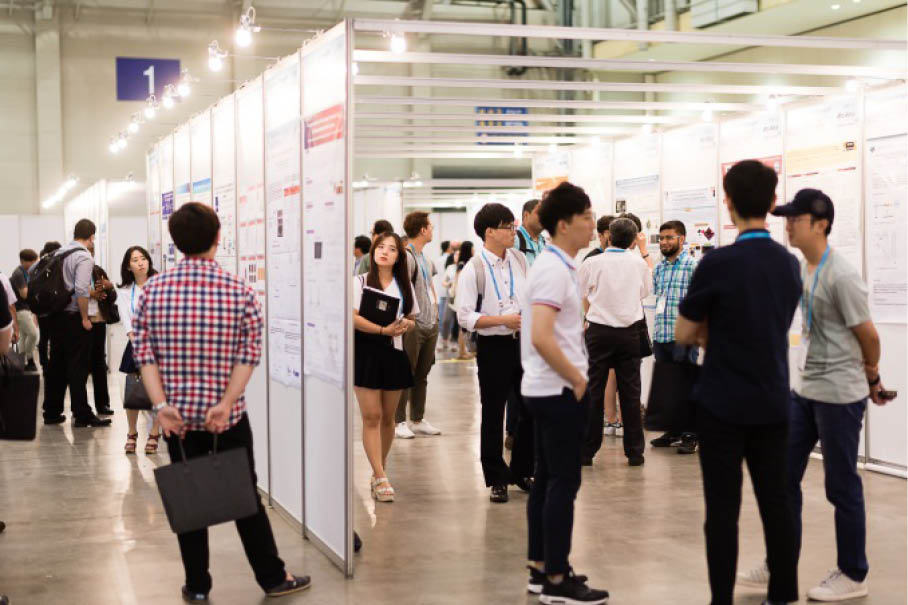 IUPAC-2015 could not have been realized without considerate support from the Ministry of Education of Korea and the National Research Foundation. The dedicated help from the Busan Metropolitan City, the Busan Tourism Organization, and the Korea Tourism organization, as well as from BEXCO, were essential for the success of the Congress. The organizing committee is also grateful for the support from sponsors, including LGChem and LOTTE CHEMICAL, exhibitors, such as Agilent Technologies and Dong-il Shimadzu Corp., as well as all the other supporters including KPIC (Korea Petrochemical Ind. Co.) and KRICT (Korea Research Institute of Chemical Technology).

Social activity programs offered a glimpse into the rich Korean culture. Dancing performances were given at the opening ceremony and at the banquet organized by Busan Metropolitan City at Nurimaru, a beautiful spot near Haeundae beach. The Gala dinner was another excellent occasion for participants to experience Korean traditions while enjoying food.

The closing ceremony was held on Friday, 14 August after the last plenary lecture, given by Professor Suzuki, 2010 Nobel laureate in chemistry, about the utilization of boron compounds in C-C bond formation. During the closing ceremony, Mark Cesa, president of IUPAC, conferred the poster awards as well as the young chemist awards. The organizing committee of IUPAC-2017, to be held in Sao Paulo, Brazil, had a chance to present their preparations for the next Congress. IUPAC-2015 was officially closed with a message from the chair of the organizing committee and the president of the Korean Chemical Society.

Photos albums have been added to the conference website at www.iupac2015.org. 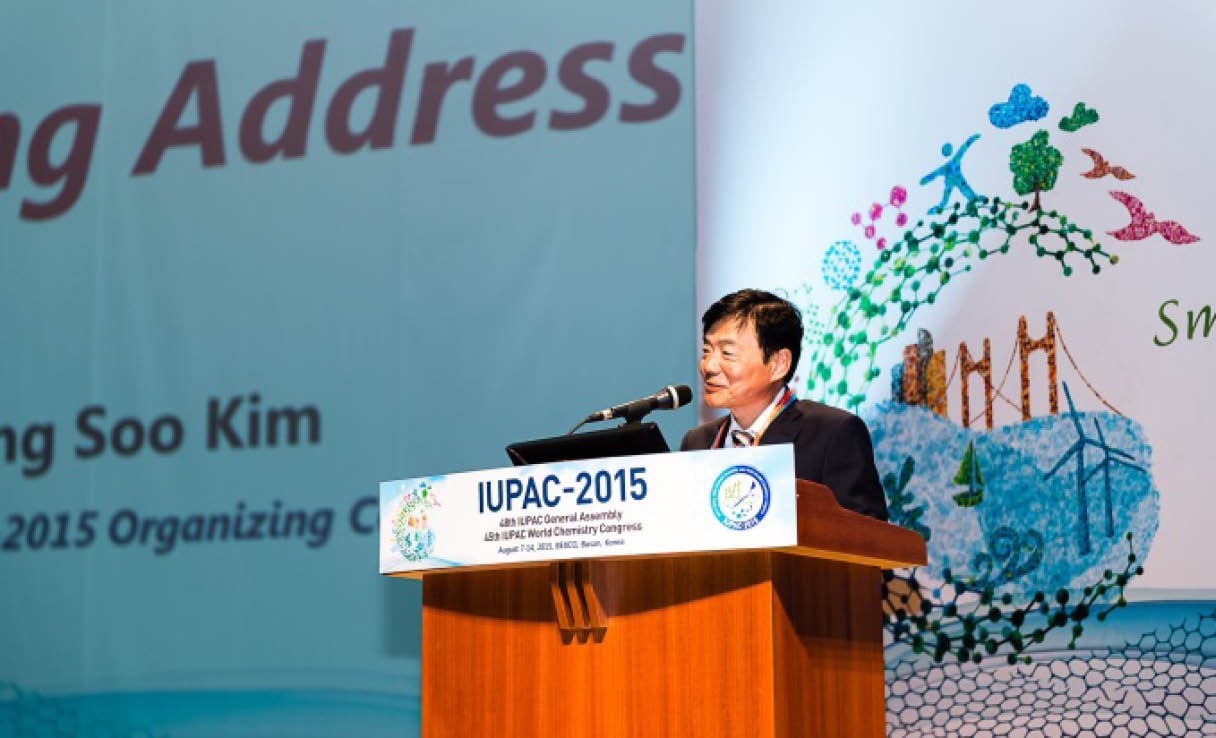 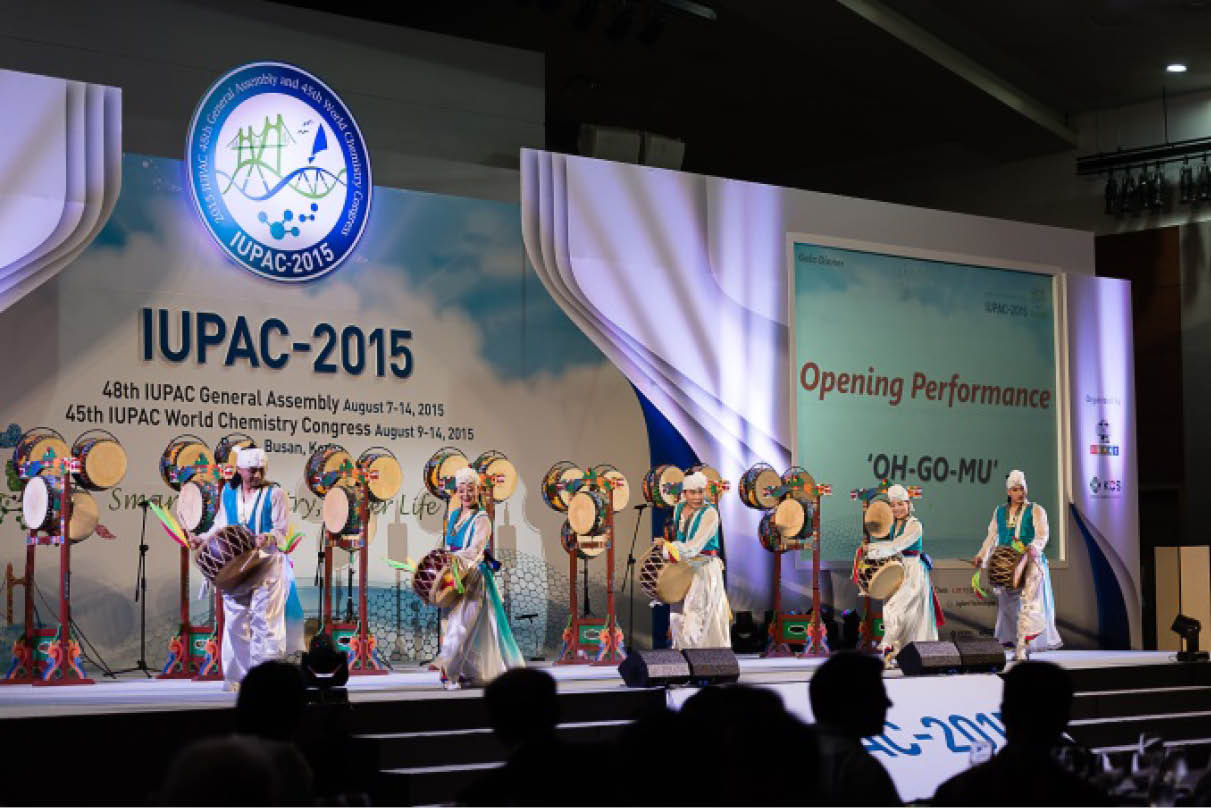