On the Path to Rewarding Times

I am grateful for this opportunity to wish members of IUPAC bodies and adhering organizatins, fellows, affiliate members, and company associates a successful, fruitful, and healthy year in 2017. Many of us will meet in São Paulo, Brazil, in July, at the IUPAC General Assembly and the 46th World Chemistry Congress, for the first time to be held in South America, to discuss the directions of the Union’s activities as IUPAC is moving to its’ centenary in 2019.

The year 2016 was rich in events. Let me share with you some examples. On 28 November 2016, IUPAC approved the name and symbols for four new elements: nihonium (Nh), moscovium (Mc), tennessine (Ts), and oganesson (Og), respectively for element 113, 115, 117, and 118. Keeping with tradition, the newly discovered elements have been named after a place or geographical region, or a scientist. From my point of view, the names of the new elements reflect the realities of our present time: universality of science, honoring places from three continents, where the elements have been discovered—Japan, Russia, the United States—and the pivotal role of human capital in the development of science, honoring an outstanding scientist—Professor Yuri Oganessian, the scientific leader of the G. Flerov Laboratory of Nuclear Synthesis at the Joint Institute of Nuclear Research in Dubna, Russia. It should be mentioned that during a 5-month period of public review that preceded the announcement of new names, the Inorganic Chemistry Division, led by its President, Professor Jan Reedijk, has responded to hundreds of questions on the new names, on how to convert or translate them to different languages, and on how to derive (nomenclature) roots from these names.

The exploration of new elements continues, and scientists are searching for elements beyond the seventh row of the periodic table. Some twenty-five years have now elapsed since the criteria that are currently used to verify claims for the discovery of a new element were set down. The recent completion of the naming of the 118 elements in the first seven periods of the Periodic Table provides a natural opportunity for a necessary expert review of these criteria in the light of the experimental and theoretical advances in the field. IUPAC and the International Union of Pure and Applied Physics (IUPAP) have recently agreed to establish a new joint working group which task will be to examine the criteria used to verify claims for the discovery of new elements.

Another event I would like to mention is the establishment of the Interdivisional Committee on Green Chemistry for Sustainable Development. Green Chemistry which started 25 years ago as the invention, design, and application of chemical products and processes to reduce or eliminate the use and the production of harmful substances, is seen nowadays as a basic instrument for sustainable development that touches many aspects of the environment and human welfare, and is relevant to 17 Sustainable Development Goals set by the United Nations.

The Interdivisional Committee on Green Chemistry for Sustainable Development (ICGCSD) will initiate, promote, and coordinate the work of the Union in the area of green and sustainable chemistry. It superseded the subcommittee on Green Chemistry of the Organic and Biomolecular Chemistry Division successfully led by Professor Pietro Tundo (who is appointed the chair of the ICGCSD). Among the supporters of this new Interdivisional Committee it is worth mentioning professors Paul Anastas, John Corish, Buxing Han, Roger Shelton who are renowned scientists working in the field of Green Chemistry for decades.

The ICGCSD will continue to organise the series of IUPAC International Conferences on Green Chemistry, to manage IUPAC participation in the PhosAgro/UNESCO/IUPAC Green Chemistry for Life programs, the CHEMRAWN Prize in Atmospheric and Green Chemistry, and any other related awards that may be established.

The ICGCSD is expected to actively work with the Committee on Chemistry and Industry (COCI) and the Committee on Chemistry Education (CCE) to stimulate and increase interest in green and sustainable chemistry, in the theory and practice of industrial chemistry and chemistry education, through their external industrial and institutional relationships. Matters relating to harmonisation, regulation, and standardisation in green and sustainable chemistry will also be in the scope of interests of the new Committee, as well as the interaction with other relevant organisations with a common interest. Among them, the Organisation for the Prohibition of Chemical Weapons (OPCW) should be especially mentioned. OPCW has been a strategic partner of IUPAC for the last decade, sharing the common goal to help chemists all over the world in the adoption of peaceful and sustainable uses of chemicals.

OPCW is the implementing body of the Chemical Weapons Convention, which entered into force in 1997. There are currently 192 Member States, covering 98% of the global population, working together to achieve a world free of chemical weapons, and who share the collective goal of eliminating existing stockpiles of chemical weapons and preventing chemistry from ever again being used for warfare. It should be mentioned that, since 1997, 93% of the world’s declared stockpile of 72 304 metric tonnes of chemical agent have been destroyed. In 2013, the OPCW was awarded the Nobel Peace Prize “for its extensive efforts to eliminate chemical weapons.”

In 2016, OPCW established an Advisory Board on Education and Outreach on which IUPAC has a permanent observer status. Our collaboration is intended to focus on efforts such as public understanding and education of students about the Chemical Weapons Convention, producing educational materials related to the science of the CWC, education on multiple uses of chemicals, and similar initiatives.

OPCW and IUPAC are actively cooperating to promote knowledge sharing, dissemination of best practices, and capacity building for the peaceful, green and sustainable uses of chemistry. Among the recent examples is the workshop “The best practices to develop the Responsible Care© programs” for the chemical industry representatives of chemical enterprises in the countries of the Russian-speaking regions (CEE and Central Asia) that was held in Moscow, Russia, in March 2016 under the auspice of OPCW and IUPAC. Another example is the active involvement of OPCW in the IUPAC International Conferences in Green Chemistry. The last one was held in Venice in September 2016. The Hague Ethical Guidelines were presented during the OPCW workshop and vividly discussed by the representatives of chemistry community. IUPAC and OPCW will further cooperate on the promulgation of The Hague Ethical Guidelines and initiatives arising from them.

On 1 December 2016, the Memorandum of Understanding between IUPAC and OPCW was signed. Its aim is to outline a framework for co-operation between IUPAC and OPCW with a view towards achieving their common objectives and providing benefits to their respective programmes and areas of work. The two organizations intend, within the scope of their mandates, to cooperate more closely to achieve their common goals in promoting chemistry for peaceful purposes, and facilitating the exchange of scientific and technical information in support of their work.

My final example deals with the outcome of one IUPAC project, that has been realized as a book recently published by Springer: “Chemistry Beyond Chlorine” (see www.iupac.org/project/2013-057-3-300). The international team of authors led by professor Pietro Tundo, states that “Chemistry beyond chlorine… is not committed in any way against chlorine chemistry; this would be out of common sense. Conversely, it should be considered as a useful tool to seek alternative pathways beyond chlorine chemistry when possible”.

As chemists, we all know that chemistry attracts a lot of public attention, because of its intrinsic diversity. Elaboration of novel chemical compounds and materials with desirable properties helps to solve such problems as provision of humanity with pure water, food, medicines. On the other hand, it is necessary to pre-empt possible negative consequences, caused by careless exploitation of chemicals. Generations of the Earth’s inhabitants have been admiring the austere beauty of the monumental building of fundamental chemistry, while nowadays chemophobia attacks more and more people as the consequence of lack of attention to chemical education and popularization of scientific knowledge. “Chemistry Beyond Chlorine” clearly demonstrates that chemists are ready to meet these challenges.

I am grateful to the IUPAC family for the commitment to the chemical sciences and looking forward to seeing you in São Paulo. 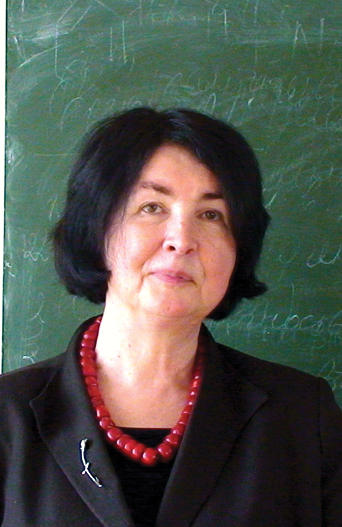 Natalia Tarasova <tarasnp@muctr.edu.ru> is President of IUPAC since January 2016. She has been a member of the IUPAC Bureau since 2008 and the Executive Committee since 2010. She is a professor at the D. I. Mendeleev University of Chemical Technology of Russia, a Member of the Russian Academy of Sciences, Director of the Institute of Chemistry and Problems of Sustainable Development, a Chairholder of the UNESCO Chair of Green Chemistry for Sustainable Development.
Online erschienen: 2017-3-7
Erschienen im Druck: 2017-1-1