Following a 5-month period of public review, the names, proposed earlier by the discoverers, have been approved by the IUPAC Bureau.

Keeping with tradition, the newly discovered elements have been named after a place or geographical region, or a scientist. The ending of the names also reflects and maintains historical and chemical consistency: “-ium” for elements 113 and 115, as for all new elements of groups 1 to 16, “-ine” for element 117, belonging to group 17, and “-on” for element 118 as an element belonging to group 18. The recommendations were published in the December 2016 issue of Pure and Applied Chemistry (doi.org/10.1515/pac-2016-0501). (The earlier provisional recommendations with the explanation of the names were published in CI Sep 2016, p. 30; no changes to the proposed names and symbols were introduced following the public review period).

Comments from the general public during the 5 month public review period were many. Apart from many full agreements, comments were received suggesting other names, in some cases accompanied by petitions from large groups of people. However, these suggestions could not be accepted, given the fact that under the current guidelines only the discoverers have the right to propose names and symbols. Questions were also received about the pronunciation of the names and the translations into other languages. Members of the chemistry community also raised the concern that Ts is one of the two commonly used abbreviations for the tosyl group. Recognizing, however, that many two-letter abbreviations have multiple meanings—even in chemistry, and for example Ac and Pr— the conclusion was made that the context in which the symbols are used makes the meaning unambiguous. 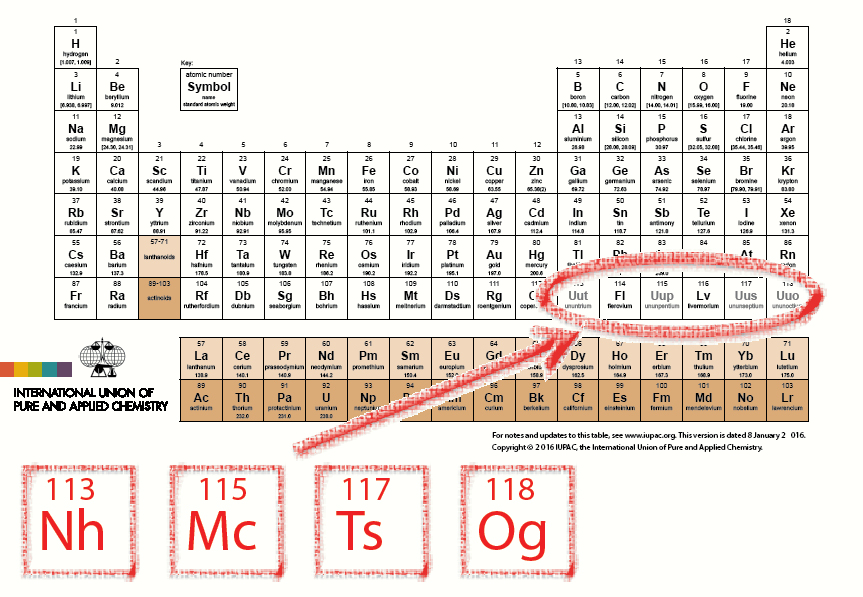 “Overall, it was a real pleasure to realize that so many people are interested in the naming of the new elements, including high-school students making essays about possible names and telling how proud they were to have been able to participate in the discussions,” said Professor Jan Reedijk, President of the Inorganic Chemistry Division. He added “It is a long process from initial discovery to the final naming, and IUPAC is thankful for the cooperation of everyone involved. For now, we can all cherish our periodic table completed down to the seventh row.”

“The names of the new elements reflect the realities of our present time” said IUPAC President Prof Natalia Tarasova, “universality of science, honoring places from three continents, where the elements have been discovered—Japan, Russia, the United States—and the pivotal role of human capital in the development of science, honoring an outstanding scientist—Professor Yuri Oganessian”.

The exploration of new elements continues, and scientists are searching for elements beyond the seventh row of the periodic table. IUPAC and the International Union of Pure and Applied Physics (IUPAP) have recently established a new joint working group, whose task will be to examine the criteria used to verify claims for the discovery of new elements.

See full release in the News section of iupac.org