As a young man, Peter Fogg won an open scholarship to Trinity College, Oxford, where he read chemistry. After gaining a first class degree, he went on to do a doctorate under the supervision of J.D. Lambert. His thesis was on Ultrasonic Dispersion in Gases. 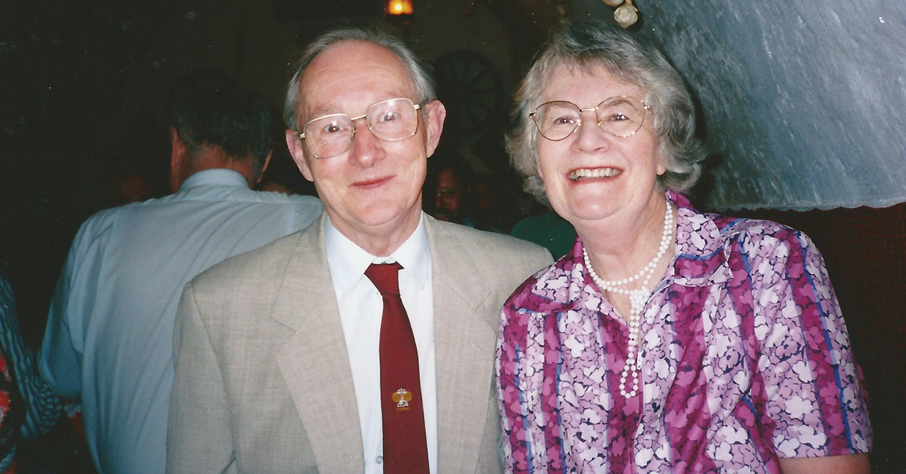 Peter and Heather at a 1996 IUPAC conference in Hungary

From 1954-1955 Peter worked as a Scientific Officer at The Atomic Energy Research Establishment in Harwell, Oxfordshire, where he worked on the chemistry of plutonium. He was an assistant lecturer at Queen’s University, Belfast from 1956 to 1958 and worked as a research chemist for Monsanto Chemicals, Ltd. between 1958 and 1962. In 1962 he became a lecturer at Flintshire Technical College in North Wales.

Peter taught at the University (formerly Polytechnic) of North London from 1965 until 1986. His undergraduate teaching was primarily concerned with Physical Chemistry and was much appreciated by his students, who found him especially helpful in both practical sessions and tutorials. At the University, Peter supervised the PhD/postgraduate work of several students and gained their gratitude and respect. When joining the University, Peter was active in the research of fast reaction kinetics and then, in collaboration with colleague John Charalambous, on the development of metal complexes for scintillation counting applications, leading to publication in Polyhedron.

He also actively participated in the International Symposia on Solubility Phenomena (ISSP). He was Co-Chair of the 3rd ISSP (1988, Guildford, University of Surrey) and was Guest Editor for the plenary and invited lectures of the 7th (Leoben, Austria, 1996), 8th (Niigata, Japan, 1998) and 9th (Hammamet, Tunisia, 2000) ISSPs, published in Pure and Applied Chemistry.

Peter Fogg and William (Bill) Gerrard collaborated on the publication of Solubility of Gases in Liquids: A Critical Evaluation of Gas/Liquid Systems in Theory and Practice (John Wiley and Sons, 1991), which was a significant contribution to that field, providing extensive information on, and data for, selected systems. Peter was also Editor-in-Chief of the Wiley Series in Solution Chemistry, which comprised authoritative, comprehensive, and up-to-date accounts of many aspects of solution chemistry. Seven volumes were published in this series between 1996 and 2003, including the seminal works: Octanol–Water Partition Coefficients: Fundamentals and Physical Chemistry (J. Sangster, 1997), The Experimental Determination of Solubilities (G. T. Hefter and R. P. T. Tomkins, eds., 2003) and Chemicals in the Atmosphere: Solubility, Sources and Reactivity (P. G. T. Fogg and J. Sangster, 2003).

Peter thoroughly enjoyed his involvement with IUPAC and the opportunities that it gave him and his wife Heather to travel and make friends all over the world. Peter’s involvement was characterized by friendship and conviviality, together with passionate professional activity and challenging scientific discussions. Peter was both a gentle man and a gentleman, and both he and Heather enriched the life of all of us.