Provisional Report on Discussions on Group 3 of The Periodic Table

The following article is intended as a brief progress report from the group that has been tasked with making recommendations to IUPAC about the constitution of group 3 of the periodic table (https://iupac.org/project/2015-039-2-200). It is also intended as a call for feedback or suggestions from members of IUPAC and other readers.

In the course of many discussions held by the task group we have concluded that there is no objective means to adjudicate between group 3 consisting of Sc, Y, La and Ac or as Sc, Y, Lu and Lr. This situation makes it more important that IUPAC should make a ruling on the question which in the final analysis is one of convention rather than one that can be decided on objective scientific grounds. What has also become apparent is that this question cannot be treated independently of that of the form of the periodic table as a whole.

As Jeffrey Leigh reminded readers of this magazine not long ago, IUPAC does not officially support any particular form of the periodic table even though the organization frequently publishes a period table with the label of “IUPAC periodic table” [1].

Attempts to resolve the group 3 conundrum have focused on chemical and physical properties and also on microscopic properties such as the electronic configurations of the atoms concerned [2]. However, none of these criteria provide a clear-cut resolution of the question. Moreover, it becomes increasingly clear that there may not be any such thing as one optimal table in a purely objective sense.

There is a well-developed literature in the philosophy of science that concerns itself with classification and with the question of natural kinds, that is to say sets of objects which are related to each other through what might be said to be purely objective properties. For example, until recently biological species were believed to be natural kinds in biology. For an animal to be classified as a tiger, for example, would require the specification of the genetic characteristics of this species.

Natural kinds are distinguished from so-called artificial kinds for which classification depends rather on human choices and not on an independently existing reality. The typical example of an artificial system of classification is the classification of library books. No one library system such as that of the Library of Congress can be said to be more correct than its competitors. The way in which these library systems classify books involves non-objective criteria as to how to demarcate books on chemistry, for example, from those on biology.

In the 1970s and 80s a theory was developed by philosophers Kripke and Putnam who sought to define natural kinds through their essences or their objective properties [3]. A favorite example of a natural kind in this literature has been that of a chemical element, which according to Kripke and Putnam can be specified by stipulating its atomic number. Needless to say, Kripke and Putnam were not the first to propose such an identification. That distinction belongs to Van den Broek and Moseley [4]. What Kripke and Putnam did was to fully adopt the scientific definition of element-hood in order to identify elements as natural kinds.

The Kripke-Putnam approach to natural kinds has come under various forms of criticism in the years since it was first proposed. In the case of species, like tigers, it has been pointed out that evolution spoils the picture, since the very essence of what it is to be a tiger is bound to change as time evolves. However, this objection could not be raised as far as elements are concerned, since broadly speaking atoms of any particular element do not evolve into other atoms over time, apart from those that decay radioactively.

A more general objection to the Kripke-Putnam approach to thinking of natural kinds has been the realization that, whatever kinds are being considered, there is always a certain degree of interest dependence that enters the stipulation of sets of entities be they tigers, galaxies or elements [5]. The new approach recognizes that epistemological considerations, having to do with our knowledge of the world, should also be taken into account when discussing the classification of scientific entities.

If we are to believe what the experts on the philosophy of classification and natural kinds have to tell us we should renounce the notion that we will ever arrive at a truly optimal periodic table, since any system of classification must inevitably remain interest dependent. Of course this state of affairs should not negate the attempts to resolve such questions as the membership of group 3 of the periodic table but it should remind us of the fact that any resolution must concede a certain degree of conventionality, or choice, on the part of the scientific community. We should accept that a degree of convention must be utilized in selecting a periodic table that can be presented as the best compromise table that combines objective factors as well as interest dependence.

A very brief history of forms of the periodic table

As is well-known, the earliest periodic tables contained eight columns and were based on the assumption that all periods were of equal lengths. Such tables, which have survived to this day in some countries, have the advantage of simplicity of form and display the fact that most group numbers correspond to the maximum oxidation state of the element in question. However, Mendeleev and other early discoverers of the periodic system began to use medium-long form tables consisting of 18 groups. This tendency became the norm as a result of tables published by Deming in 1923 and due to the increasing use of quantum mechanics to explain the form of the periodic table. The 18-column table corresponds to two elements in the s-block, ten in the d-block and six in the p-block to reflect precisely the maximum number of electrons that can be accommodated into a set of s, d and p orbitals respectively, starting with period four. Meanwhile, the inner transition elements of f-block are generally represented as a disconnected footnote consisting of either 14 or 15 elements, depending on which particular table one consults.

Herein lies the variation which is closely connected with the question of the constitution of group 3 of the periodic table. There are a total of 3 possible forms of the 18-column table, each of which corresponds to a particular group 3 assignment. In the tables shown in figures 1 to 3, group 3 is shown as containing either Sc, Y, La and Ac or Sc, Y, Lu and Lr or just Sc and Y.

While the first two options seem to be equally plausible on an 18-column representation, there is one difference that this representation masks somewhat. This difference is far more apparent if the periodic table is displayed in an even more expanded 32-column format which incorporates the f-block into the main body of the table.

Variations of the 18-column table with group 3 shown as containing either Sc, Y, La and Ac (top) or Sc, Y, Lu and Lr (middle) or just Sc and Y (bottom). 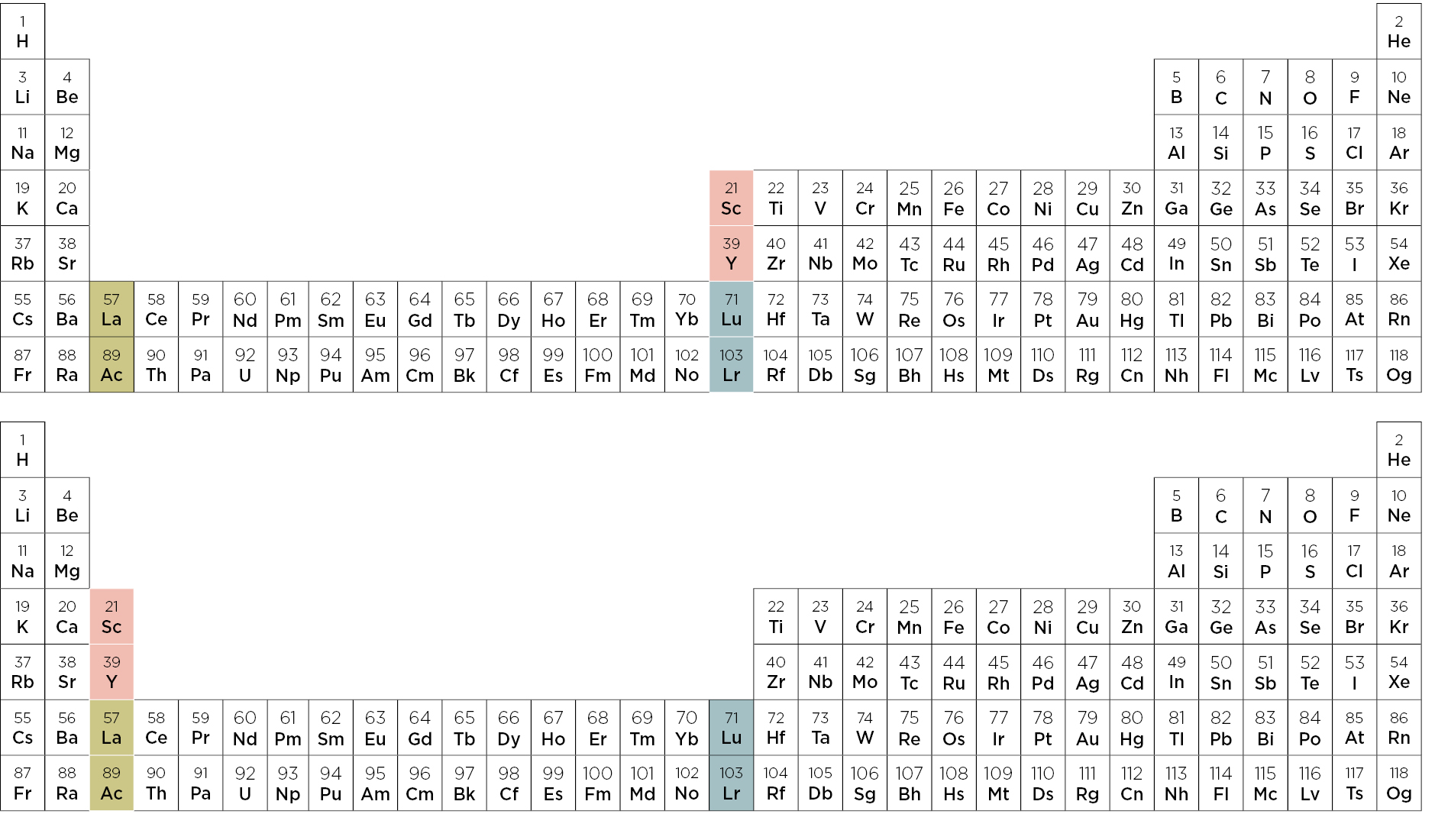 The periodic table that is sometimes labeled as “IUPAC periodic table” as shown in figure 3 avoids assigning the 3rd and 4th members of group 3 altogether, by simply leaving empty spaces below Sc and Y. As a result, the f-block then appears to contain two rows of 15 elements, and thereby violates the simple one-to-one correspondence between orbital capacity as required by the elementary quantum mechanical account of the periodic table.

The only 18-column table that appears to avoid the drawback in the split of the d-block while also maintaining a 14-element-wide f-block is the one shown in figure 2. Needless to say, the assignment of elements to these blocks is approximate, just as the assignment of electronic configurations to atoms also represents an approximation. Moreover, one may readily concede that an element such as thorium does not actually possess any f-orbital electrons and yet it is classified as being among the f-block elements in all five of the periodic table representations shown in figures 1 to 5.

A student looking at the table shown in figure 3 is bound to wonder whether there is some scientific reason for making the f-block have a width of 15 elements. Neither a student, nor his/her instructors, would probably realize that the table in question has been designed by practitioners of specialized branch of relativistic quantum mechanics concerned with the properties of super-heavy elements [6]. Such interest-dependence should not, in our view, dictate how the periodic table is presented to the general chemical and scientific community.

Perhaps a compromise could be reached on the table depicted as figure 2 since it achieves three desiderata. First, it displays all the elements in order of increasing atomic number. Secondly, it avoids splitting the d-block into two highly uneven portions, and thirdly, it depicts all the blocks of the periodic table in accordance with the underlying quantum mechanical account of the periodic table which calls for 2, 6, 10 and 14 orbitals to occur in the extra-nuclear electron-shells.

Historical developments have shown that quantum mechanics provides an explanation for the periodic table even if it does not provide a full and exact reduction of the periodic table. It appears that some practitioners of relativistic quantum chemistry uphold the grouping together 15 rather than 14 elements in the f-block of the table. However, any such findings should not be imposed on the majority of users of the periodic table and should not, in our view, dictate how the periodic table is presented to the widest possible audience of chemists, chemical educators and chemistry students.