The advancement in computer science technology has led to some serious concerns about the piracy and copyright of digital content. Digital watermarking technique is widely used for copyright protection and other similar applications. In this paper, a technique for digital watermarking based on Discrete Cosine Transform (DCT), Discrete Wavelet Transform (DWT), and Grasshopper Optimization Algorithm (GOA) is proposed. The method computes the DWT of the cover image to obtain the sub-components of the image. The subcomponent is converted to frequency domain using DCT. The challenge is to find the optimal scaling factor to be used for watermarking. The authors have designed a GOA based technique that finds the optimized scaling factor and the coefficient for embedding the watermark. GOA makes the watermark undetectable and is invisible in the cover image. The watermark image is embedded in the cover image using these coefficients. The extraction of watermark from the cover image is done by using inverse DCT and DWT. The proposed method is compared with the other state of the art methods. The effectiveness of the proposed method is computed using Peak Signal to Noise Ratio (PSNR), Normalized Cross Correlation (NCC) and Image Fidelity (IF). The proposed method outperforms the other methods and can be effectively used for practical digital watermarking.

Digital watermarking is being widely used for hiding messages by embedding them into digital content like images and videos. The technique is used in various applications like copyright protection, identity verification, and also in hidden communications. Digital watermarking is often considered similar to Steganography. Both these techniques hide messages within images, however their objectives are entirely disjoint from each other. Watermarking aims at hiding messages whereas in steganography messages are of least importance [1]. Numerous researchers have worked in the area of watermarking to develop effective watermarking techniques. The increasing innovations in the field of watermarking can be owed to its use in copyright protection.

In this paper, GOA is used for optimizing the scaling factor, and a robust and invisible method for watermarking is proposed. GOA is a meta-heuristic algorithm which is inspired by the swarm behaviour of grasshoppers [13]. It has a high ability of search exploration in a given space and thus can be used effectively for digital watermarking. The proposed method combines DWT and DCT along with GOA to embed the watermark in the cover image. The proposed methodology is discussed in the following sections preceded by a background of the techniques used.

Discrete Cosine transform or more commonly DCT represents an image as the sum of data points. These data points are the sinusoids of different magnitudes and frequencies [14]. It is used to separate an image into sub-bands or spectral sub-bands with varying importance in terms of visual quality of the image. The DCT converts any signal or image from the spatial domain to a frequency domain. It divides the image into two frequency components, namely high frequency and low frequency. The high frequency component represents the reflectance and consists of low energy. The low frequency component represents the luminance of the image and consists of high energy. DCTs are widely used in multiple applications like image compression and watermarking.

Figure 1 represents the function of DCT. The spatial domain image is converted to frequency domain on application of DCT. It provides multiple advantages like high-compression ratio, high-computational complexity, and low error rate. The two dimensional DCT of a N × M image can be computed using Equation (1).

where f(i, j) is the intensity level of the input image at location (i, j).

Wavelet theory is a relatively new theory that provides a mathematical framework for decomposition of an image into components at different scales and with different resolutions known as Multi-Resolution Analysis (MRA) of images [15]. The theory is a transform based image processing technique that makes use of Wavelet transforms. These are useful as they provide both temporal as well as frequency information for images. The result of applying a 2D wavelet transform is the representation of image as the sum of four components at each level of resolution. Multi-resolution theory represents and analyses images and signals at one or more resolutions. It is a combination of multiple techniques originating from different fields. The sub-band coding used is from digital signal processing and quadrature mirror filtering is derived from pyramidal image processing. The framework for multi-resolution theory is more commonly known as Multi-Resolution Analysis (MRA). The advantage of MRA is that those features that are undetected in one resolution may be detected in other image resolutions. A series of approximations of the given image are computed using a scaling function. A factor of 2 for resolution is applied on each level.

The discrete wavelet transform of an image f(x, y) of size M × N is then,

In this paper, the Haar Wavelet transform is used to compute the wavelet components. This transform is the simplest form of wavelets that are computed using the Haar Transform. It acts as the prototype for all other advanced forms of wavelets [16]. The Haar wavelet's mother wavelet function Ψ(t) is mathematically expressed as given in Equation (6).

and its scaling function φ(t) can be described as,

The transform computes the data points by finding the sums and differences of adjacent elements. It computes both the horizontal and vertical elements. Equations (8) and (9) are used to calculate the Haar Scaling and wavelet vectors.

Grasshopper Optimization Algorithm (GOA) is a bio inspired technique. It is inspired by the swarm behaviour of the grasshoppers. These creatures are mostly seen individually however they combine together to form a large swarm. The grasshoppers damage crops by the swarm that they build by coming together. A significant feature of the grasshopper swarm is that it exists in nymph as well as adulthood stage. The grasshopper swarms hog and move in forward direction similar to rolling cylinders. They consume the vegetation that they find in the way. Thereafter they become adults and form a swarm in the air. Following this movement the grasshoppers cover long distances. The grasshoppers follow slow and small steps in their larval phase and during adulthood they take long and abrupt steps. These swarms search the food and this behaviour can be used for optimization problems for exploring search spaces. GOA works in two phases to find the optimal solution. The first stage is exploitation in which the search agents move locally similar to grasshopper movement in the larval phase. The second phase is exploration which is inspired by the grasshopper movement in the adult phase. In this stage, the search agents move abruptly to find the optimal solution. The Grasshopper movements are modelled mathematically to form the basis of the optimization algorithm. The swarming behaviour of the grasshoppers is modelled using the following equations:

where, dij is the distance between i-th and j-th grasshopper.

s is the designed function.

Flowchart of the proposed method

The proposed method is based on Grasshopper Optimization Algorithm for digital watermarking on images. The method is simulated using MATLAB 2017a and the results are compared with other state-of-the-art methods. The experiments are carried on three different cover images (Figure 4). The embedding message or watermark image used is shown in Figure 5. 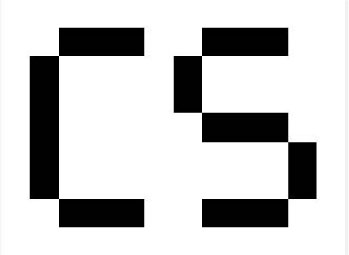 The proposed method is compared with two other state of the art methods. The first method uses DWT, DCT and Bacterial Foraging Optimization (BFO) for watermarking [17]. The other method is an improved method that hybridizes Particle Swarm Optimization (PSO) with BFO [17]. Both of these methods are compared with the proposed method. The result of applying the various watermarking methods is shown in Figure 6.

Results of the watermarking approaches applied on different images

The watermarking results obtained are measured using the metrics that determine the quality of the proposed method. The metrics that are used for measuring the quality are Peak Signal to Noise Ratio (PSNR), Mean Absolute Error (MAE), and Mean Square Error (MSE). In case of watermarking the best method is the one which has high PSNR values but low MSE and MAE values. PSNR, MAE and MSE may be computed as follows: 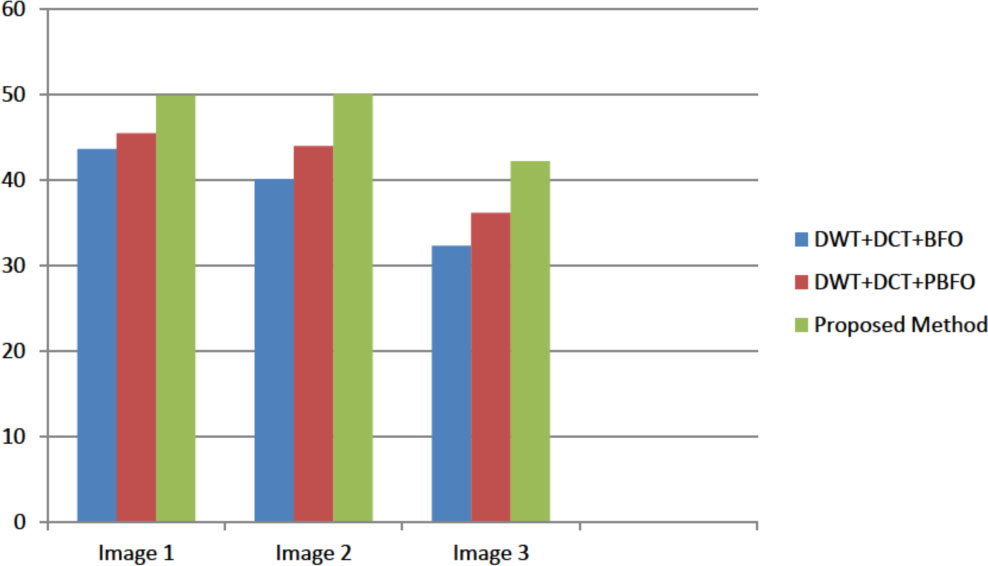 This paper presents a digital watermarking technique for image watermarks using a bio inspired algorithm. Grasshopper Optimization Algorithm is used to compute the scaling factor for watermarking. The scaling factor is used to adjust the DWT and DCT coefficients for embedding the watermark on the cover image. The use of GOA provides an optimal scaling factor, thus the proposed method is robust and effective. Experiments are conducted to evaluate the performance of the proposed method. MATLAB 2017a is used for the implementation of the proposed method. The results obtained are compared with other two state-of-the-art methods. The first method combines DWT, DCT, and BFO for watermarking of images. The second method is an improved algorithm and uses a hybridized optimization algorithm. The hybridized method is a combination of PSO with BFO. The proposed method gives low MSE with high PSNR as compared to the other two methods. Thus, the developed method can efficiently be used in practical applications.