The article uses spline-based phase analysis to study the dynamics of a time series of low-frequency data on the values of a certain economic indicator. The approach includes two stages. At the first stage, the original series is approximated by a smooth twice-differentiable function. Natural cubic splines are used as an approximating function . Such splines have the smallest curvature over the observation interval compared to other possible functions that satisfy the choice criterion. At the second stage, a phase trajectory is constructed in -space, corresponding to the original time series, and a phase shadow as a projection of the phase trajectory onto the -plane. The approach is applied to the values of GDP indicators for the G7 countries. The interrelation between phase shadow loops and cycles of economic indicators evolution is shown. The study also discusses the features, limitations and prospects for the use of spline-based phase analysis.

Traditionally, regression and autoregressive models are used to analyze the dynamics of macroeconomic indicators. Such approaches require a priori definition of the model specification and rather strict assumptions about the data properties for example stationarity. Another approach is to consider the time series of macroeconomic indicators as a function of the dynamic system states, it’s evolution being described by deterministic or stochastic differential equations [5,6,9,10,11].

The values of macroeconomic indicators are aggregated and averaged over relatively long periods. This allows us to consider them as deterministic ones and provides the basis for applying the second approach. In this case, the main task is to reconstruct the dynamic system that generated the time series. According to Takens’ theorem [8], a description of the phase space of a dynamical system can be obtained if, instead of the real variables of the system, we take finite-dimensional delay vectors composed of the values series at successive moments of time.

The approach includes two stages. At the first one, we replace the discrete time series of economic indicators by a smooth function that best approximates the original discrete time series according to a certain criterion described later. The second stage consists in analyzing the joint behavior of the constructed function and it’s first derivative .

The criterion for choosing an approximating function is as follows. It should be continuous, adaptive and provide a minimum error in the description of the data under study. The specified requirements are simultaneously satisfied by interpolation cubic spline functions.

In a number of studies [1,2, 4,7], spline interpolation is effectively used to analyze low-frequency data. For example, Chakroun and Abid state that “the cubic spline method is a tractable and reasonably correct estimation method that we recommend in any market with infrequent trading” [2]. Roul and Prasad Goura [7] demonstrate the effectiveness of using splines for the Asian option pricing problem. The authors recommend using the cubic spline method to analyze stock quotes in any market with infrequent trading.

The collected datasets have the following properties: the data are low-frequency and highly aggregated. This means that it is free of noise and can be considered “as is.”

Note that the data source allows obtaining the indicator values under consideration in the homogeneous data format, i.e., the data are considered in the same units of measurement for the entire period of the study. This is important both for economic analysis and for correct approximation of the examined time series. Therefore, we consider the indicators at constant prices (constant 2010 US$).

To study the behavior of the indicator time series, it is necessary to construct its approximation, which has the following properties: it is a twice continuously differentiable function with the graph connecting the given values of a series by the curve of the minimal length.

Thus, we solve the interpolation problem. As an interpolant, we consider a one-dimensional cubic spline , which is defined as follows.

Given a set of data points , , where are time moments, . The spline is a function satisfying: .

On subinterval , , function is a polynomial of degree 3, , .

Common form of notation using the coefficients of the polynomials:

The constructing of an interpolation cubic spline is reduced to solving a system of linear algebraic equations (with respect to the coefficients of piecewise polynomials or the node slopes). To receive a uniquely solvable system, two additional equations are necessary. These equations are obtained from the specified boundary conditions. The most common are the following options:

Holladay’s theorem is true for the natural spline [3].

(Holladay) If – natural interpolation spline on knots , – any function, then

and the inequality is strict for .

For research purposes, it is important that the approximating function connects the known values by the curve of minimum length. Taking into account Holladey’s theorem, we choose natural splines. Thus, the constructed approximation allows replacing discrete values with a continuous smooth function. The study of its behavior enables conclusions about the dynamics of changes in the indicators under consideration.

The second stage of the approach is related to the constructing of a phase trajectory and a phase shadow. The concept of a phase trajectory is associated with the qualitative theory of differential equations, in particular, with the visualization of solutions of ordinary differential equations. In the general case, a phase shadow is a geometric representation of the dynamic system trajectories in the phase plane.

In our study, by the phase trajectory, we mean a curve in three-dimensional space , where – observation time, – values of the smoothing function, and – the first derivative values of the smoothed function. By the phase shadow, we mean the projection of the phase trajectory onto the plane . Phase shadows enable illustrating the change in the behavior of the function under study in terms of its deviations from the general trend, if any, and to show the stability of this trend.

To demonstrate how phase shadows allow analyzing the similarities and differences in the behavior of macroeconomic indicators for different countries, we consider the values of the G7 countries (Germany, France, Italy, Canada, USA, Japan) GDP over 2000–2019.

First, using the example of German GDP data, we consider the application of the outlined approach. Figure 1 shows the GDP values for the period 2000–2019 and the graph of the corresponding natural interpolating cubic spline . 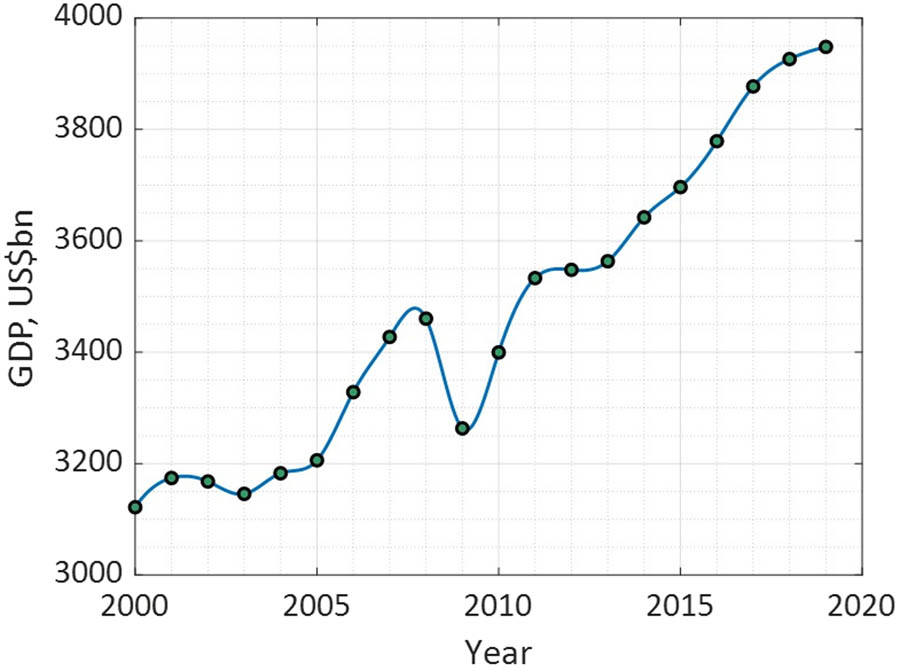 The approximating function being constructed, we obtain the opportunity to visualize a phase trajectory (Figure 2) as a three-dimensional graph with the coordinate axes corresponding to time in years, the values of and . 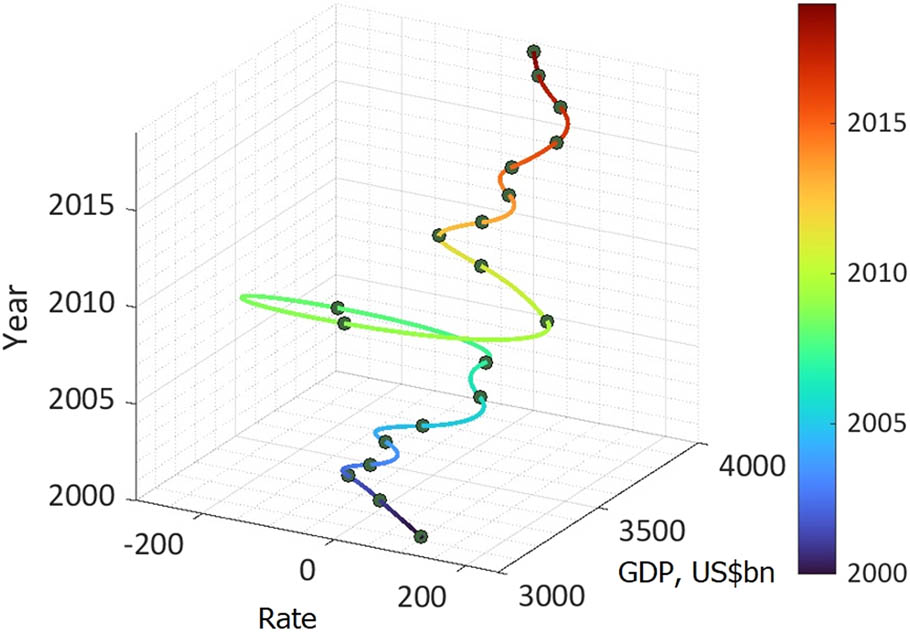 The German GDP phase trajectory based on the spline approximation of statistical data over 2000–2019.

For the convenience of the analysis, a colorbar is used, which allows one to compare points on the phase trajectory with a time period.

Figure 3 presents the phase shadow as a projection of the phase trajectory onto the plane (GDP, rate). 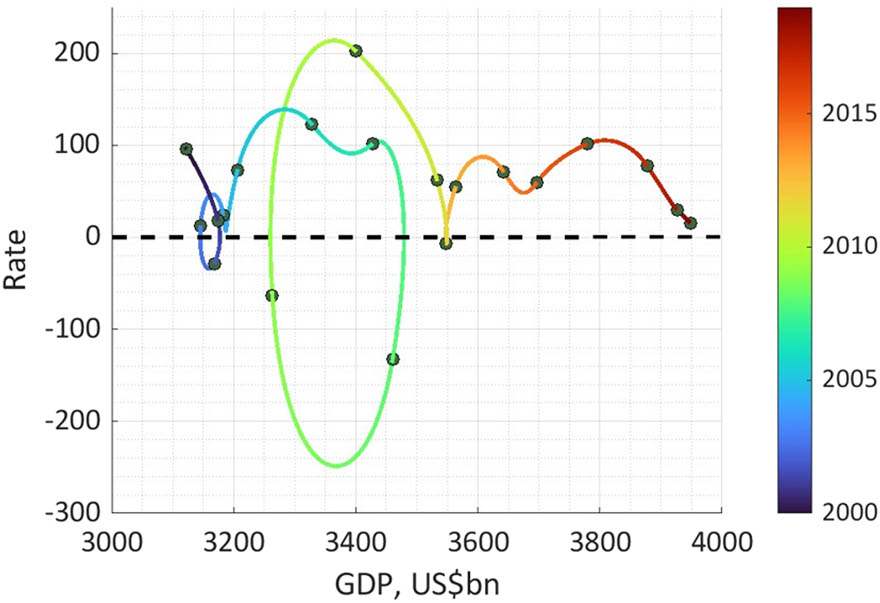 The German GDP phase shadow based on the spline approximation of statistical data over 2000–2019.

The phase shadow loop reflects the economic process characterized by the following four phases: prosperity (expansion or upswing of economy), recession (from prosperity to recession, upper turning point), depression (contraction or downswing of economy), and recovery (from depression to prosperity, lower turning point). The highlighted zero-line allows you to estimate the periods of local increase and decrease of the analyzed macroeconomic indicator.

It is known that in the early 2000s, the German economy practically stagnated. The worst growth rate was achieved in 2002 (+1.4%), 2003 (+1.0%) This is clearly seen in Figure 3. The phase shadow contains a loop corresponding to a cycle that began at the end of 2005 and ended in 2010. At the same time, the slowdown in GDP growth in 2011 did not lead to the formation of a loop and did not have a strong impact on the indicator dynamics. Thus, the phase shadow allows us to show the phases of the indicator change, which provides additional opportunities for identifying economic cycles and their forerunners.

Phase shadows allow us to compare the dynamics of indicators for different economic entities (in our case, countries). For this purpose, we normalize the GDP indicators, since the volumes of economies and the rate of change in the macroeconomic indicators of the G7 countries differ significantly.

Instead of the GDP indicator, we will consider

where is the 2010 indicator value. Figure 4 shows the results of a spline approximation of the time dependence for the G7 countries. 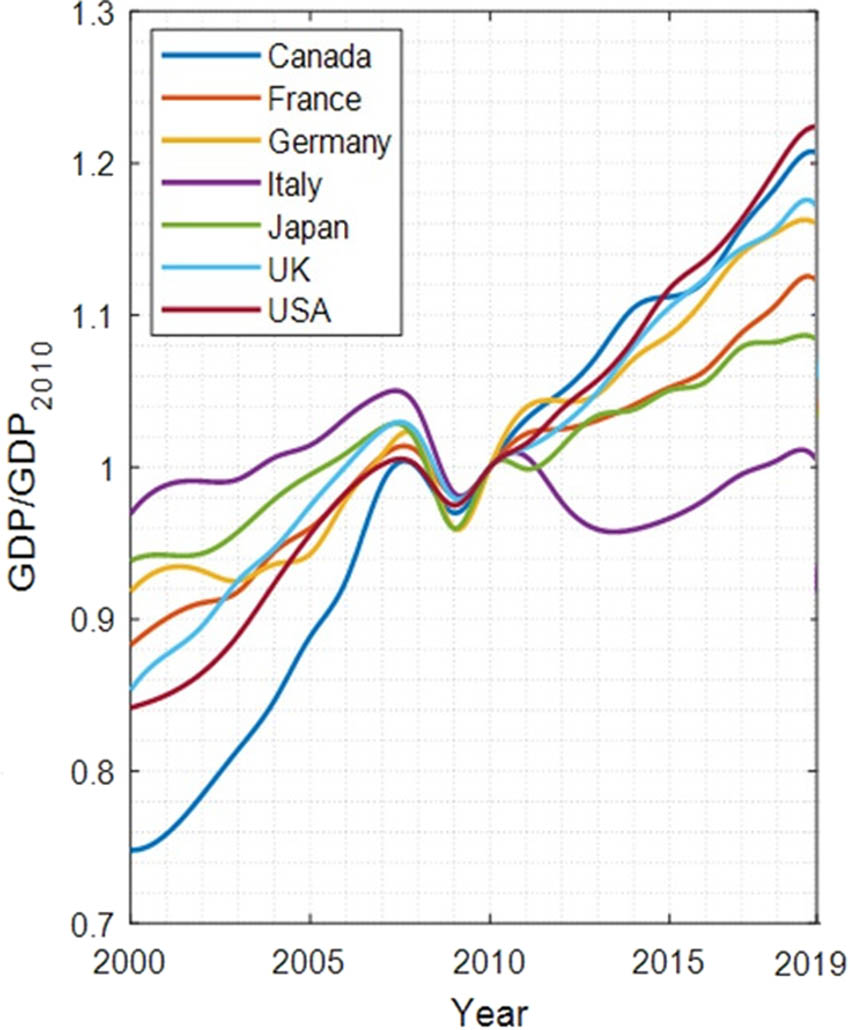 Phase shadow for the German normalized GDP is presented at Figure 5. The range of values on the axes is deliberately chosen in such a way that it is possible to compare phase shadows for all seven countries. 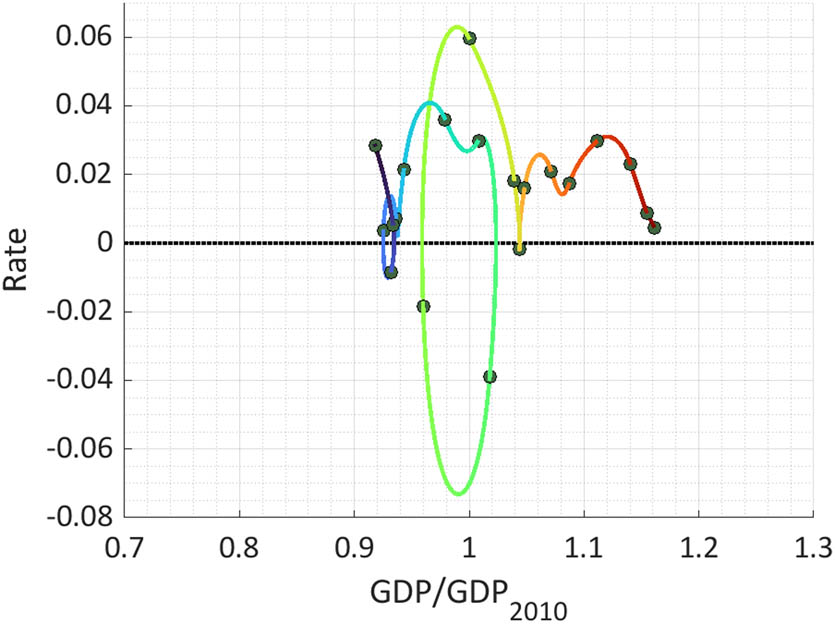 GDP phase shadows for Canada (a) and the United States (b).

Figure 6 shows the similarity in the behavior of the GDPN indicator for Canada and the United States, when growth and slowdown are close in scale and time.

Figure 7 shows that for the United Kingdom, with the similarity of the behavior of the indicator with France, there is a greater increase in the values of this indicator over the entire period of time. This is not so clearly visible on the graphs of the plain time dependence for these two countries.

GDP phase shadows for the United Kingdom (a) and France (b).

GDP phase shadows for Italy (a) and the Japan (b). 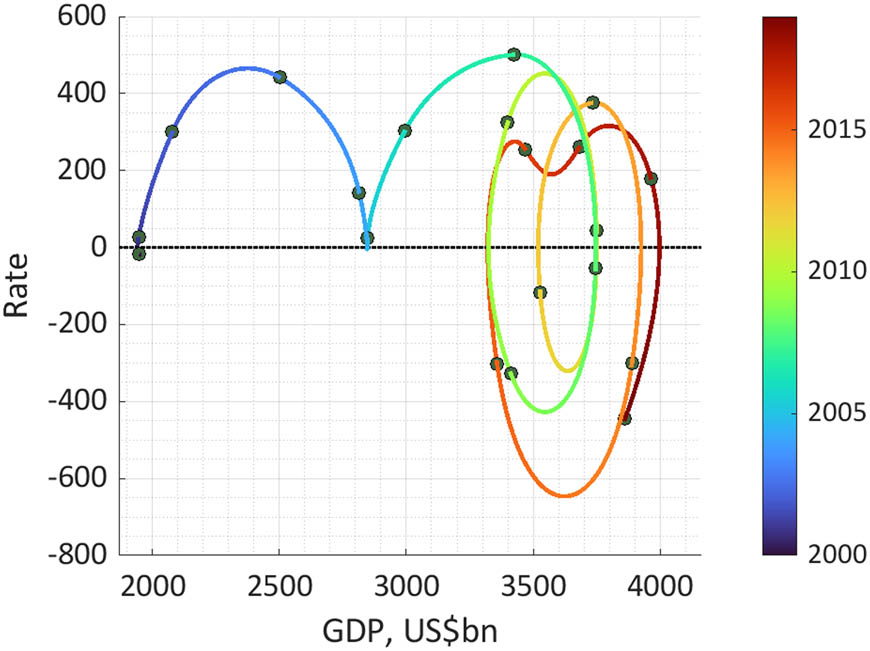 Empirical analysis has shown that phase shadows are an appropriate tool for studying the dynamics of macroeconomic indicators. Herewith, interpolating by natural cubic splines is well suited for smoothing low-frequency aggregated data.

When applying the approach outlined in the article, it is necessary to take into account the peculiarities of calculating the analyzed indicators. It is important to consider the data in constant prices, and at the same time, when comparing phase shadows for different subjects, it is necessary to normalize the indicators.

The results clearly illustrate the events in the global economy. Applying the proposed method for a set of indicators study allows identifying crises and examining their phases, both a posteriori, and forward by making forecasts based on spline extrapolation of data. The outlined approach has a good development prospect for frequent data as well.