The use of aluminium alloy in vehicle components is very important for improving fuel efficiency. Aluminium alloy has mild strength properties and good formability compared to steel [1]. Efforts to improve the mechanical properties of aluminium can be achieved by several methods including heat treatment, mechanical treatment, coating treatment or surface treatment [2]. Generally, the aim of these treatments is to obtain the desired properties by modifying the microstructure of the material [3]. One such effort to improve the mechanical properties of aluminium is surface treatment. This treatment is aimed at increasing the corrosion resistance, wear resistance, electrical resistance, material strength, and good weldability [4] of the material. Generally, the failure of a component starts from the surface and then, develops into a structural failure [5].

Additional material particles used in improving mechanical properties in the FSP are ceramics particles such as AL2O3, SiC, SiO2, TiO2, TiC or alloying elements such as Cu,Ni, Zn [9, 10]. The role of ceramic particles in increasing mechanical strength is as a nucleation sites of solidification so that the grain size to be finer. Whereas the role of alloying elements is to form solid solution of aluminum alloy which causes grain size refinement [11]. The FSP treatment gives an increase in mechanical strength due to grain size refinement and more evenly distributed of additional material particles, thereby giving rise to the dispersion strengthening and eliminating casting defects. Althoug the result of the investigation on FSP got attractive mechanical properties and modified micro structure of materials, on the other hand it is guite a few succesfull practical use in industrial scope [12]. However, no studies investigated on the effects of the amount of additional Zn particles on the mechanical and physical properties of the friction stir processed aluminum Alloy.

The aim of this research was to investigate the effects of the alloying of Zn particles on the mechanical and physical properties of friction stir-processed AA 1100.

A pin-less tool made of HSS with a diameter of 15 mm was used to fabricate the specimen with the process parameters of the tool being a plunge depth of 1.2 mm, rotation speed of 1120 rpm and dwell time of 10 seconds. A schematic diagram of the friction stir processing is shown in Figure 1. The friction stir processing parameters are listed in Table 1. An FSP run with the same parameters was conducted, as a reference, on the specimen without the Zn particles. A Vickers micro hardness test was carried out using a Highwood HWMMT X7 with a load of 300 gr and dwell time of 10 s. 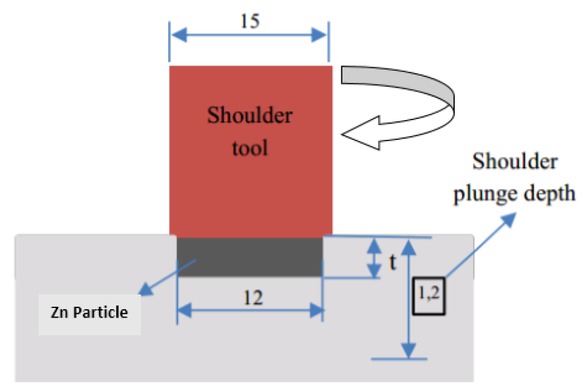 The microstructure of the friction stir-processed specimen was characterized using scanning electron microscopy and optical microscopy.

Figure 2 shows the measurement point for the Vickers hardness on a cross section of the friction stir-processed specimen with various volumes of Zn particles. The hardness testing was conducted on three rows to determine the effect of the FSP treatment on the hardness along the thickness of the workpiece.

Mapping the measurement point of the Vickers hardness test 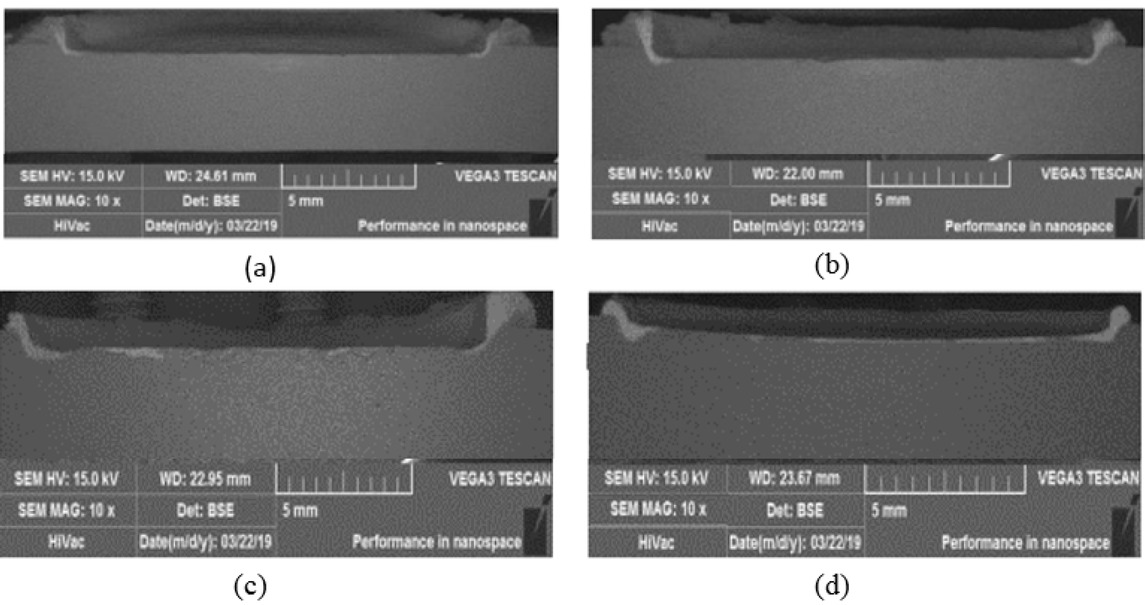 The microstructure of the shoulder affected zone (SAZ) under various volumes of Zn particles is shown in Figure 4. The SAZ had a finer grain size compared to the other regions due to both the dynamic recrystallization and severe plastic deformation generated by the stirring action between the tool surface and workpiece [4]. It was observed that increasing the Zn particle volume resulted in finer grains in the SAZ. This was consistent with the results of a previous research, which stated that the addition of Zn particles led to the production of finer grains [11]. 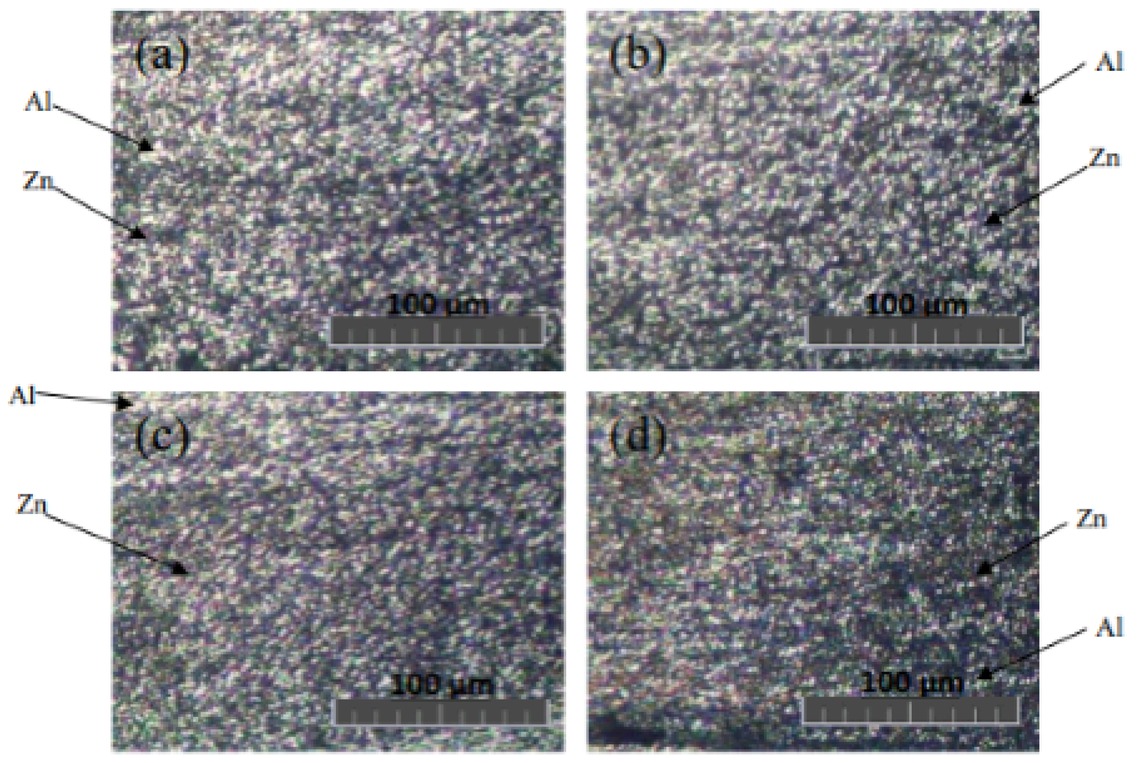 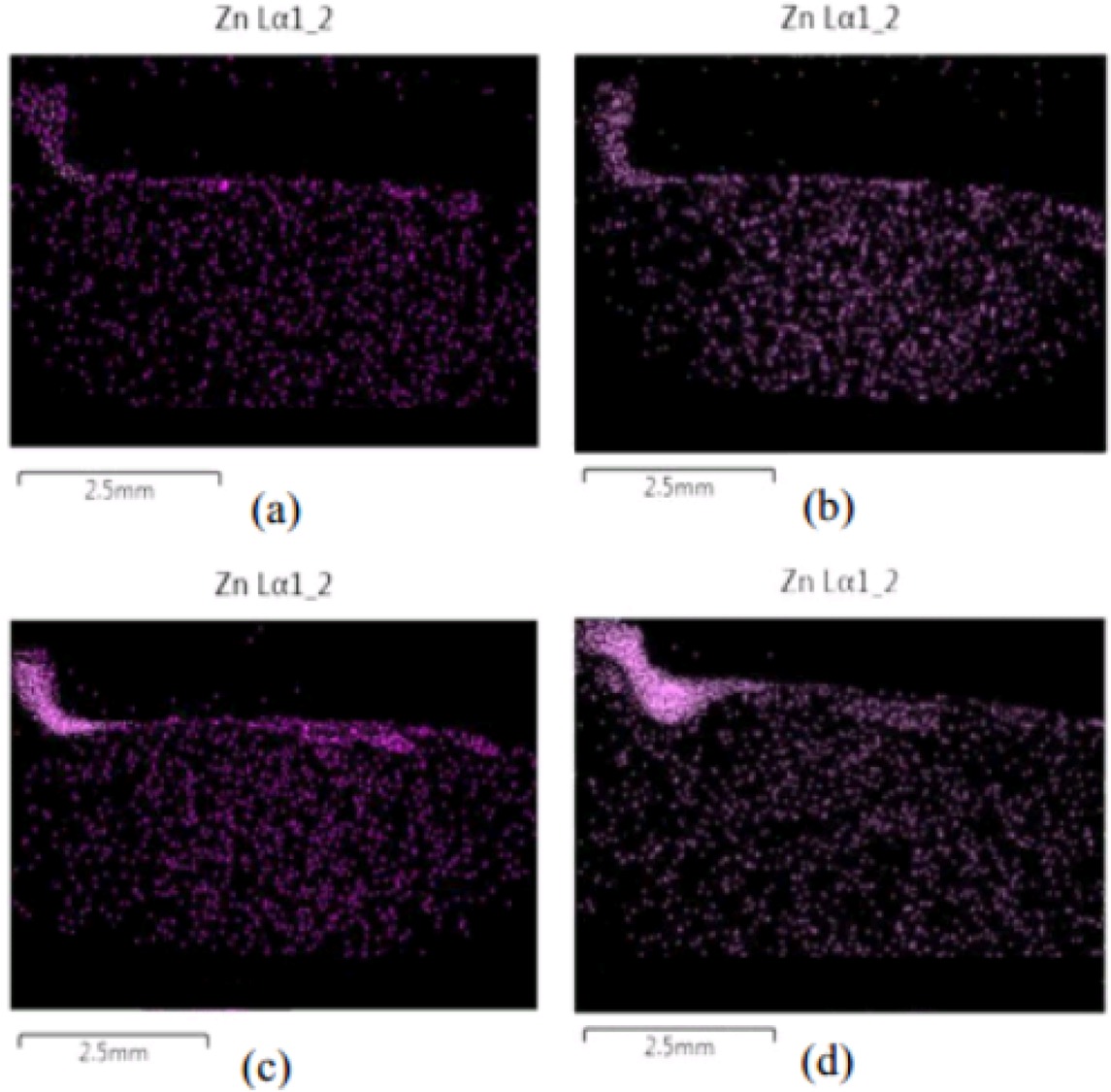 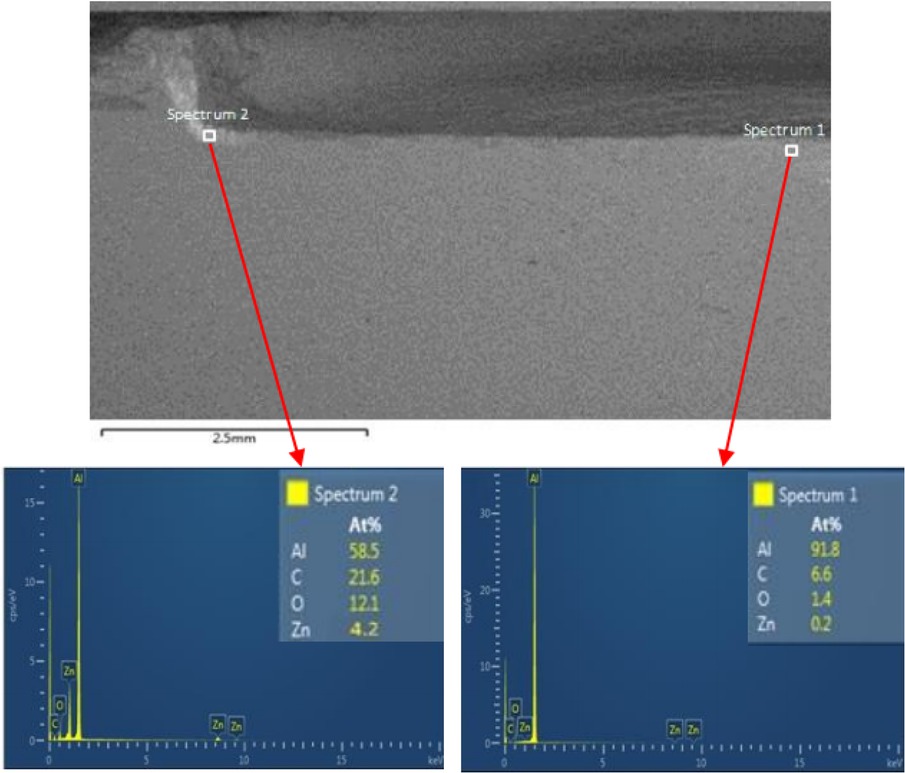 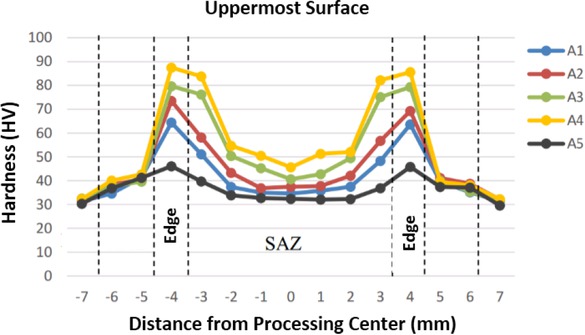 The variation in hardness along the cross section of the specimen was due to the uneven distribution of Zn particles along the cross section. When the stirring process occurred, the heat energy that was generated softened the Al and the rotational motion of the tool blended it with the Zn particles. The higher hardness was the result of the refined grain size and the presence of a solid solution of Zn particles. This was due to the rotating tool, which rubbed the surface of the workpiece, thereby generating the heat that led to the recrystallization of the grains. The severe plastic deformation caused by the stirring action of the tool resulted in dynamic recrystallization, which led to the production of very fine grains [8, 15]. 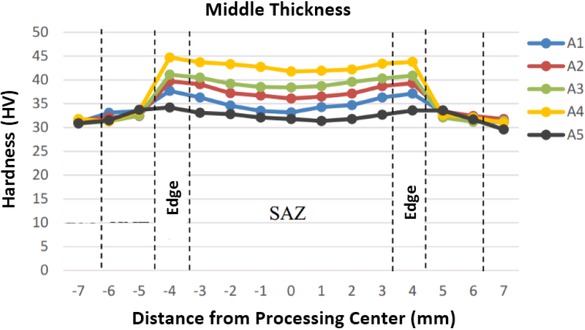 Surface hardening by the friction stir process method on AA 1100 aluminium under various Zn particle volumes was investigated, and the following conclusions were drawn: