We point out a major flaw in the so-called conformable calculus. We demonstrate why it fails at defining a fractional order derivative and where exactly these tempting conformability properties come from.

Khalil et al. proposed a definition for the fractional derivative in [5] using what they called the “conformable derivative”. This concept was quickly adopted by T. Abdeljawad in [1] where he claims to have developed some tools of fractional calculus.

We point out the flaw in Khalil et al.’s definition and uncover the real source of this conformability through reviewing the statements and proofs in [1, 5]. Analogous remarks apply to the statements and proofs in [3] and [4]. It turns out that the reason behind the conformability of this derivative is, ironically, the same reason it is not fractional.

We would like to emphasize here that we are not reviewing the aforementioned work to provide useful formulae to work with. On the contrary, our real purpose is to discourage researchers from using it, by making it clear from the mathematical point of view why the conformable derivative is not fractional.

We have shown in ([2], Section 5) the disadvantages of using the conformable definition in solving fractional differential equations. It breaks the fractional equation and replaces it with an ordinary equation that may no longer properly describe the underlying fractional phenomenon. This is probably the reason it produces a substantially larger error compared with the Caputo fractional derivative when used to solve fractional models (see [2], Section 6).

2 The problems in the statements and proofs in [5]

The results in [5] are all based on the following definition:

Definition 2.1 is flawed. Once we establish this, it will be immediately seen that the proofs in [5] are unnecessarily involved. More importantly, the results therein will be found insignificant as they follow directly from the traditional integer-order calculus.

We proved the following theorem in [2]:

We note here the problems with Definition 2.1 in the light of Theorem 2.1:

The identity (2.2) is the reason Tαf demonstrates “conformability”. The conformability comes precisely from the integer-order derivative, the factor f′, in (2.2).

The derivative Tαf is not a fractional (order) derivative. It is exactly the integer-order derivative times the root function t1–α.

Therefore, Definition 2.1 is to be understood as follows:

Now, we show how this correct understanding of what Definition 2.1 proposes trivializes the results in [5].

The next theorem explains why Tαf is described as conformable. We show why the statements are trivial and how the conformability comes from (2.2).

The remark that follows Proposition 2.1 in [5] is false. If an α-differentiable function f on ]a, b[ is uniformly continuous on [a, b], then its α-derivative is not necessarily bounded therein. A counterexample is f(t) = which is Lipschitz on [0, 1], but is unbounded on ]0, 1[.

Take a look at:

3 The problems in the statements and proofs in [1]

We proceed to demonstrate the flaws in the definitions suggested in [1]. We prove that the tools of calculus proposed there lack the novelty, as they are trivial consequences of the traditional calculus. The ideas in [1] are all based on the following definition:

It is also noted in [1] that if f is differentiable, then

The following theorem is given in [2]:

Let us see the problems in Definition 3.1:

Unlike with the classical fractional derivatives of Riemann-Liouville and Caputo, Definition 3.1 does not work for functions defined on ℝ. Indeed, by Remark 3.1, if f is defined on ℝ, then both derivatives f(t) and f(t) are ill-defined at every t ∈ ℝ, which is unacceptable.

There is no geometric or physical motivation that justifies the negative sign in the definition of the operator . Furthermore, the case α = 1 is supposed to give the left first order integer derivative, but Remark 3.1 implies

which is neither the left nor the right derivative of f at t.

There is an obvious inconsistency in Definition 3.1 when it comes to defining f(a) and f(b). Let a < b. We have clarified in Remark 3.1 that if a function is not differentiable at some point t ∈ ]a, b[, then the pointwise criterion of Definition 3.1 does not allow it to be α-differentiable at t. This, however, excludes the endpoints a and b. We are going to discuss f(a) and the analogue applies to f(b). Unjustifiably, Definition 3.1 allows the derivative f(a) to exist regardless of the existence of the right derivative of f at a. Precisely, by Remark 3.1, if f exists on ]a, a + δ[, for some δ > 0, then

Consider the function It is easily verifiable that (f1)(1) does not exist. But the Riemann-Liouville fractional derivative f1 exists at t = 1, and

Notice that (g1)(t) grows unboundedly with t. Contrarily, the fractional derivatives g1 and g1 are bounded. To see this, let t > 1. We have 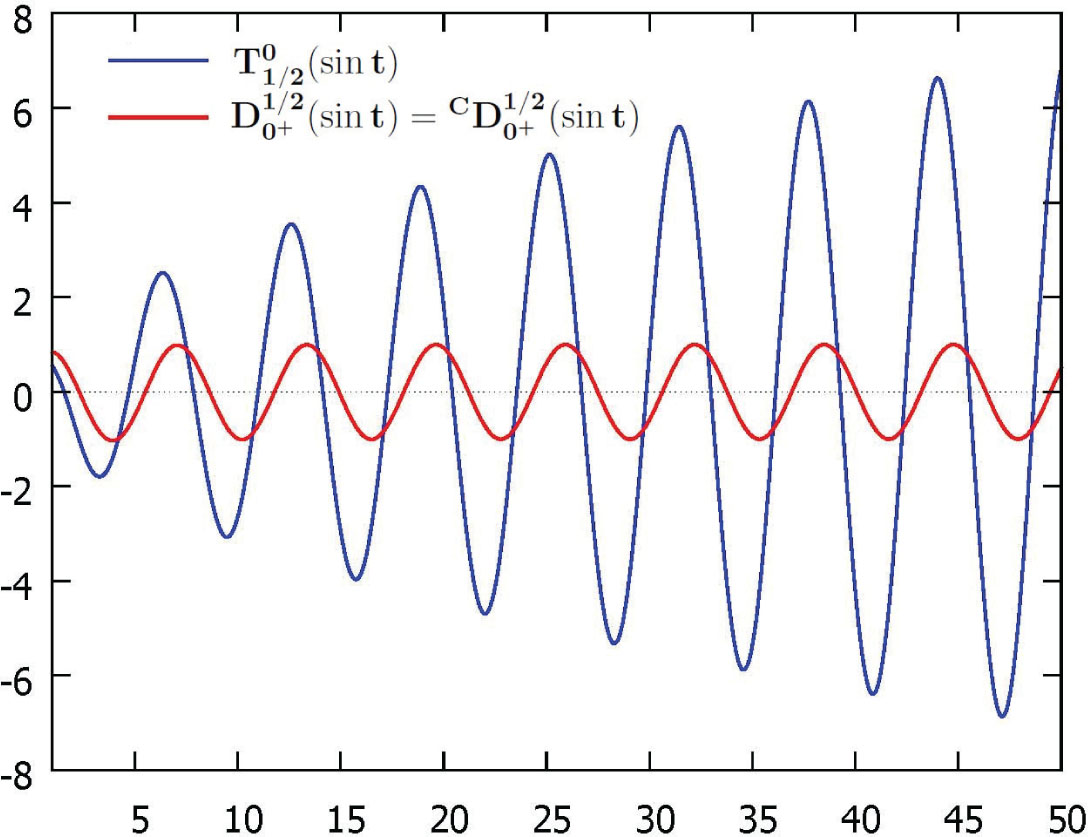 The behavior of g1 is very different from that of g1, g1

The function g2 grows much faster than the fractional derivative. To prove this, we compute 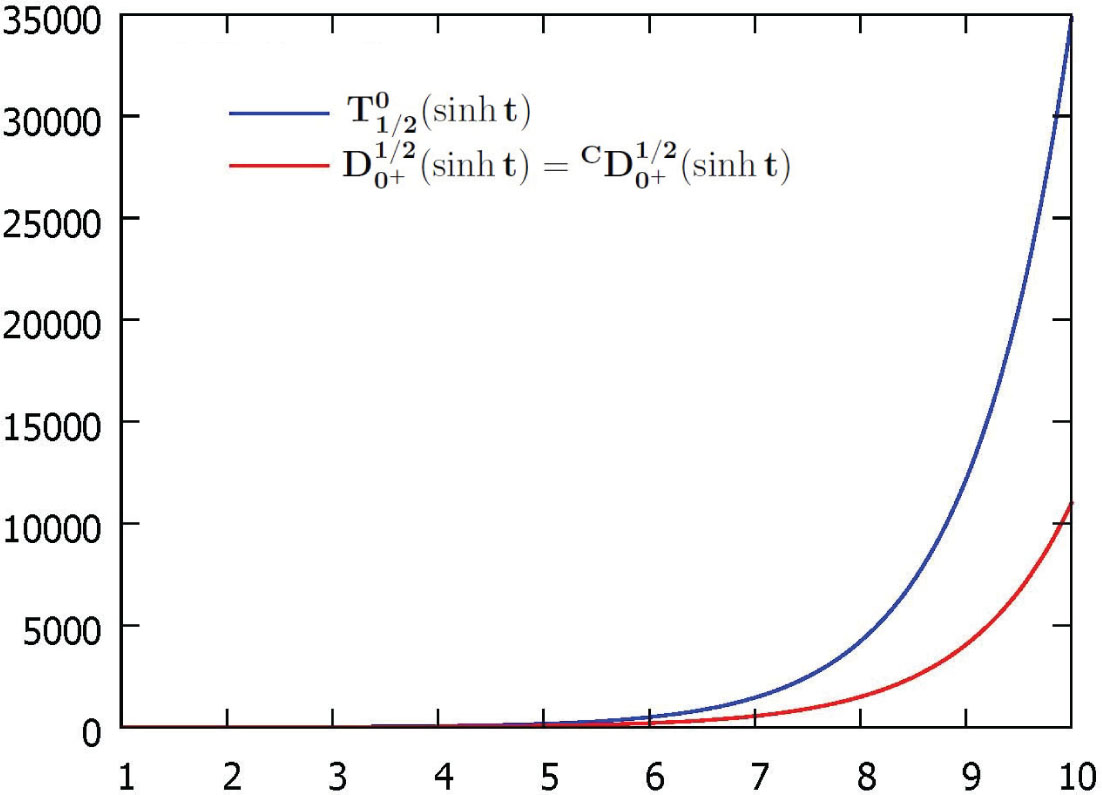 The behavior of g2 is very different from that of g2, g2

Remarks 3.1 through 3.6 show the insignificance of the results in [1]. We illustrate how the proofs presented in [1] reduce to trivial exercises of calculus. For example:

Both the statement and proof of the next theorem ([1], Theorem 4.1) we investigate are incorrect. This implies that Proposition 4.2 and Examples 4.1 through 4.3 in [1] are also incorrect.

([1], Theorem 4.1) Assumefis an infinitelyα-differentiable function, for some 0 < α < 1 at a neighborhood of a pointt0. Thenfhas the fractional power series expansion:

The proof in [1] begins with writing

and proceeds by applying to both sides of (3.11), then evaluating both sides at t0, and repeating the process k times. The coefficients ck are inaccurately calculated:

We prove in Proposition 3.1 below that the proof presented in [1] is incorrect and the series (3.10) does not make sense.

We immediately realize from (3.12) that the infinite differentiability of f does not guarantee that the series (3.10) makes sense. We need infinitely many more smallness restrictions on the derivatives of f near t0. Precisely, we have the following proposition.

Given a functionfandα ∈ ]0, 1[, the expansion (3.10) does not make sense, unless the infinitely many limits

The author is very grateful to professor Virginia Kiryakova for her encouraging and valuable comments.

Article The flaw in the conformable calculus: It is conformable because it is not fractional

Frontmatter
FCAA related news, events and books (FCAA–Volume 22–2–2019)
The flaw in the conformable calculus: It is conformable because it is not fractional
The failure of certain fractional calculus operators in two physical models
Inverse problems for a class of degenerate evolution equations with Riemann – Liouville derivative
On Riesz derivative
A note on fractional powers of strongly positive operators and their applications
Semi-fractional diffusion equations
Extremum principle for the Hadamard derivatives and its application to nonlinear fractional partial differential equations
Well-posedness of fractional degenerate differential equations in Banach spaces
See more...