The solidification microstructure evolution of Ni-25 at.% Cu alloys under different undercooling degrees were studied by the cladding method and cyclic superheating method. Two grain refinement phenomena were observed in the obtained undercooling. In the low undercooling condition, dendrite remelting is the main reason for grain refinement in the recalescence process, while in the high undercooling condition, the stress accumulated in the recalescence process leads to recrystallization in the later stage of recalescence. Under the condition of high undercooling, the solidification structure is composed of complete equiaxed grains with relatively uniform grain size, which indicates that grain boundary migration occurs during grain growth.

Compared with the traditional process, the grain refinement in supercooled melt is spontaneous. Because of this, more and more attention has been paid to this phenomenon since Walker [1] obtained the grain refinement structure in supercooled melt in 1959. Researchers have studied many alloy systems, such as pure Ni [2, 3] and Ni–Zr [4]. At the same time, the methods used by researchers to obtain undercooling of alloys or metals are also inconsistent (such as melt flux method [5, 6], dropper method [7], and melt spinning method [8]). However, molten coating and cyclic superheating techniques have been widely accepted and used as methods to obtain three–dimensional bulk alloys [9, 10, 11, 12, 13, 14].

The Ni-25 at.% Cu alloys were prepared by melting pure nickel (99.99%) and copper (99.99%) particles under the protection of high-purity Ar gas. Before melting,the pure nickel and copper were pre-polished with sandpaper to remove surface oxidants and etched with HCI solution. Before the undercooling experiment, the quartz crucible glass and the sample were first cleaned in an ultrasonic cleaning machine containing alcohol for at least 6 min to remove the impurities on the surface. The whole undercooling experiment was carried out under vacuum condition, and the vacuum pressure was 10–3 Pa. Under the heating of induction heating coil, B2O3 was first heated to the molten state and kept warm for 10 min to absorb impurities on the surface of the material. Then gradually increasing the temperature until the temperature was 100 K to 150 K higher than the melting point of the alloy and keeping the temperature for about 15 min, each sample will be continuously heated and cooled by circulation, then turnning off the high-frequency heating power supply, and the undercooled sample will spontaneously cool to room temperature. Undercooling was the liquidus temperature minus the starting temperature point of recalescence (solidification). We used a temperature detector to measure the cooling-recalescence temperature curve of the alloy sample, and the undercooling value was calculated by using the liquidus temperature minus the starting temperature point of recalescence(solidification). In order to get a more detailed rule of solidification microstructure evolution, the difference of undercooling degree of each supercooled sample was about 10 K. The whole temperature change process was collected by an infrared thermometer with an accuracy of ±5 K and a response time of 10 ms, and transmitted to a computer in real time.

In the range of supercooling, some typical microstructural transformation processes were observed. Figure 1 shows the solidification structure of undercooled Ni-25 at.% Cu under typical undercooling conditions. The results show that there are several obvious microstructural transformation stages in the whole solidification process. 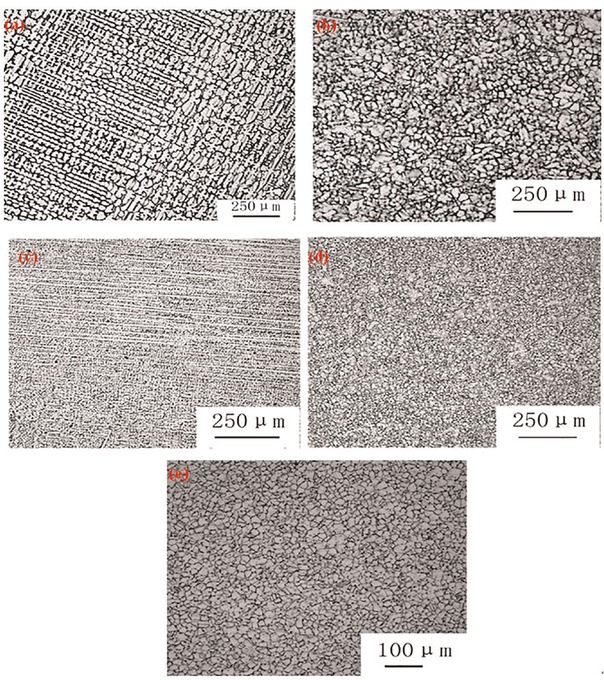 According to the solidification structure diagram in Fig. 1, the structures obtained from the two kinds of grain refinement are different. At low undercooling, the grains are smooth and the grain boundaries are wide, which is called a spherical crystal structure. When the undercooling is high, the solidification structure is equiaxed, the grain size is uniform, and there are annealing twins in the grains. It can be seen that the two grain refinement mechanisms are necessarily different. 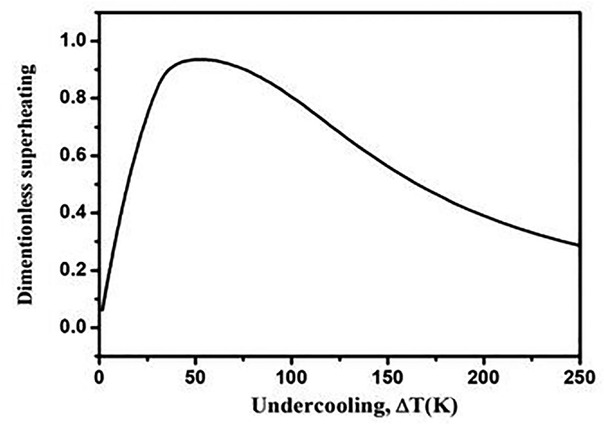 Remelted fraction of the primary dendrite at the highest recalescence temperature in highly undercooled Ni-25 at.% Cu alloys.

With the increase of initial undercooling, the solidification rate of undercooled melt also increases. Therefore, under the condition of high undercooling, the transformation rate of undercooled melt to solid will be very high. Because primary dendrites are very fragile, they have no ability or strength to resist deformation. When the residual undercooled melt acts on the dendrite, there will be a certain amount of stress accumulation. When the accumulated stress is greater than the maximum stress that the primary dendrite can bear, the dendrite will fracture and a large amount of stress will accumulate in the dendrite. The energy is stored in the deformed dendrite fragments in the form of strain energy, which pats the dendrite fragments in a metastable thermodynamic state. The formation of dense crystal defects leads to the occurrence and development of high temperature recovery and recrystallization. 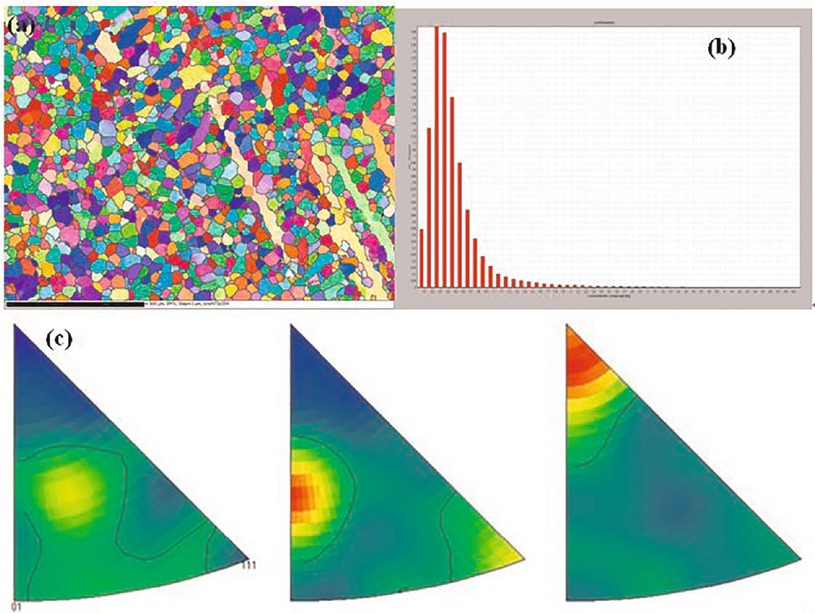 (a) the grain structure of undercooled Ni-25 at.% Cu at 60 K, (b) the misorientation diagram, and (c) the inverse pole diagram. 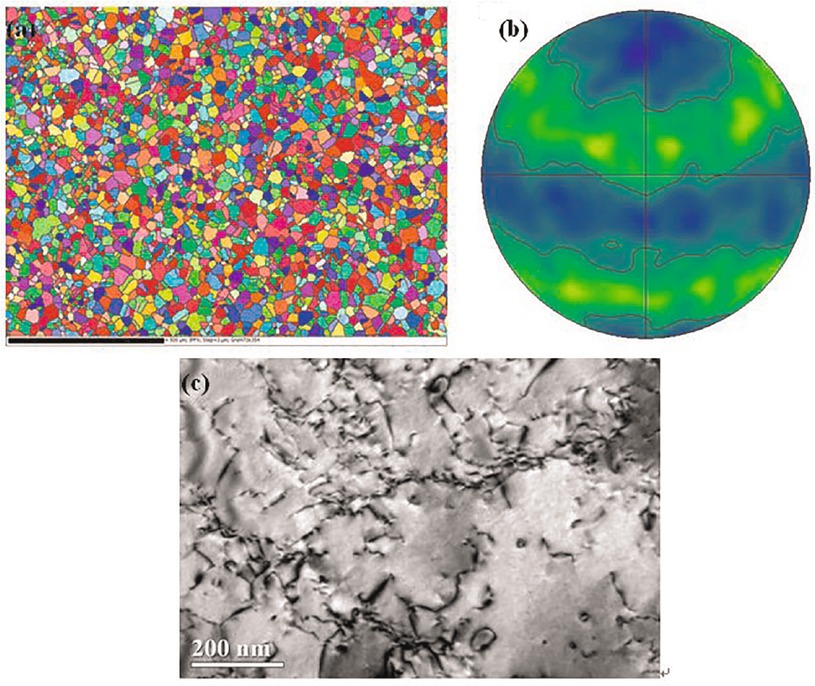 (a) the grain structure of undercooled Ni-25 at.% Cu at 260 K, (b) the inverse pole diagram, and (c) typical bright field TEM images of the dislocation networks.

The microstructural evolution of Ni-25 at.% Cu alloy under different degrees of undercooling was systematically studied by means of cladding and cyclic superheating, and the typical solidification structures were detected in detail by EBSD. The main conclusions are as follows