R is one of the most popular languages used by statisticians, data analysts, researchers and marketers to retrieve, clean, analyze, visualize and present data [1]. It is an interactive environment providing a wide variety of statistical and graphical techniques. The R tool has become more popular among statisticians, mathematicians, computer scientists and researchers because of its excessive number of libraries and packages and ease of use. The R tool can also be applied in genetic applications. It is an implementation of the S programming language and has an estimated two million users [2], [3].

The genome contains all of the information needed to build and maintain an organism. In humans, a copy of the entire genome – more than 3 billion deoxyribonucleic acid (DNA) base pairs – is contained in all cells that have a nucleus [4] and more than 99 % pairs are the same in all humans [5]. A DNA chain is made of four bases: adenine (A), guanine (G), thymine (T) and cytosine (C). These four chemical bases always bond with the same co-partner to comprise base pairs. For a complete genome a DNA sequence can be represented as a very long text containing only the bases (A, C, G, T) [6].

Thousands of nucleotides are sequenced every day. From 1982 to the present, the number of bases in GenBank has doubled approximately every 18 months [8]. Approximately 228719437638 bases are there in the GenBank database in February 2017 [8]. As a result, it becomes very hard to maintain, process, and store the large dataset in the database. Again, finding the characteristics and comparing Genomes is a major task [9], [10]. So it is clear that, DNA sequences should be compressible which is an analytical method created by bioinformatics.

The proposed research is a lossless compression algorithm which builds an Extended Binary Tree for DNA sequences by assigning binary codes (0 and 1) to each base to compress both repetitive and non-repetitive DNA sequences. The algorithm is implemented using R. This paper is organized in 6 sections. Section 2 presents the background and previous work related to the research, Section 3 describes the proposed methodology and working principle, Section 4 presents the results, Section 5 discusses and analyzes the results, and last but not least Section 6 includes conclusion and future work.

Due to not using special structures of biological sequences, the standard compression techniques cannot compress the biological sequences well. Recently, several algorithms have been proposed for the compression of DNA sequences based on DNA sequence special structures. Two lossless compression algorithms named BioCompress [14] and BioCompress-2 [6] were proposed by Grumbach and Tahi. These algorithms were based on Ziv and Lempel data compression method [15], [16]. They search the previously processed part of the sequence for repeats. BioCompress-2 is the extended version of BioCompress which uses the arithmetic coding of order 2 if no significant repetition is found. The results showed that both algorithms compressed the standard benchmark data with an average compression ratio of 1.850 bpb for Biocompress and 1.783 bpb for Biocompress 2 [17]. Decompression may demean the algorithm performance, as it requires reference to the starting of the sequence which requires more memory reference [18].

The Cfact [19] used a two-pass algorithm to search for the longest exact and reverse complement repeats. It builds the suffix tree of the sequence and then encodes using LZ. Non-repeat regions are also encoded by 2 bpb. There are no compression results about this algorithm; therefore it is difficult to compare [17]. It works similar to Biocompress, but takes more compression time, since it uses two passes, and constructs a suffix tree.

GenCompress is a one pass algorithm which is based on LZ77. This algorithm carefully finds the optimal prefix and uses order-2 arithmetic encoding whenever needed [13]. It searches for both approximate matches and the approximate complimented palindrome. There are two versions of GenCompress: GenCompress-1 uses the Hamming distance with replacement or substitution operations only. GenCompress-2 uses edit distance based on the insert and delete operation. GenCompress achieves 1.742 bpb which is a higher compression ratio compared to BioCompress-2 [17].

DNACompress [20] is the modified algorithm of GenCompress which is a two-pass algorithm. It also uses Lempel-Ziv compression scheme which finds all the approximate repeats including complemented palindromes using a software tool called Pattern Hunter [21]. It encrypts approximate repeat and non-repeat regions. DNACompress was able to deal with large sequences (e.g. E. coli with about 4.6 Megabases) in about a minute, where GenCompress required nearly about half an hour [17]. This algorithm achieves a compression rate of 1.72 bpb.

Huffman coding or 2 Bits Encoding Method is based on building a binary tree according to the bases frequencies. Each base is represented by 2 bits and assigned as A = 00, C = 01, G = 10, T = 11. As a result, it requires 2400 bits of space when the sequence length is 1200. That is, the storage of encoded sequence is almost the double of its original sequence length [6].

The proposed algorithm works on two phases. In the first phase it uses Huffman code to generate an extended binary tree based on the frequencies of the bases. In the second phase, each base is replaced by its corresponding binary bits generated from the tree. Compression and decompression of the DNA sequences are performed using R. Several steps are performed in this manner as described in the subsections through 3.1 to 3.6. A flowchart showing the proposed methodology including compression and decompression method is noticed in Figure 1. 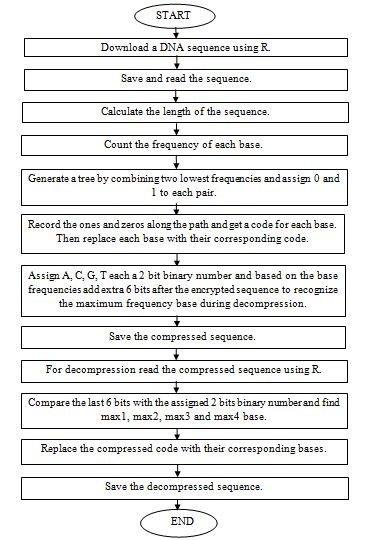 The ‘National Center for Biotechnology Information’ (NCBI) maintains a huge database of all the DNA and protein sequence data. For the research project the ‘DENGUE’ DNA sequence with accession number “NC_001477” is retrieved from NCBI GenBank database using R and saved to a FASTA-format file using “write.fasta()” function.

The saved FASTA-format file is then read using read.fasta() function in R environment. The command reads the contents of the file into an R list object. 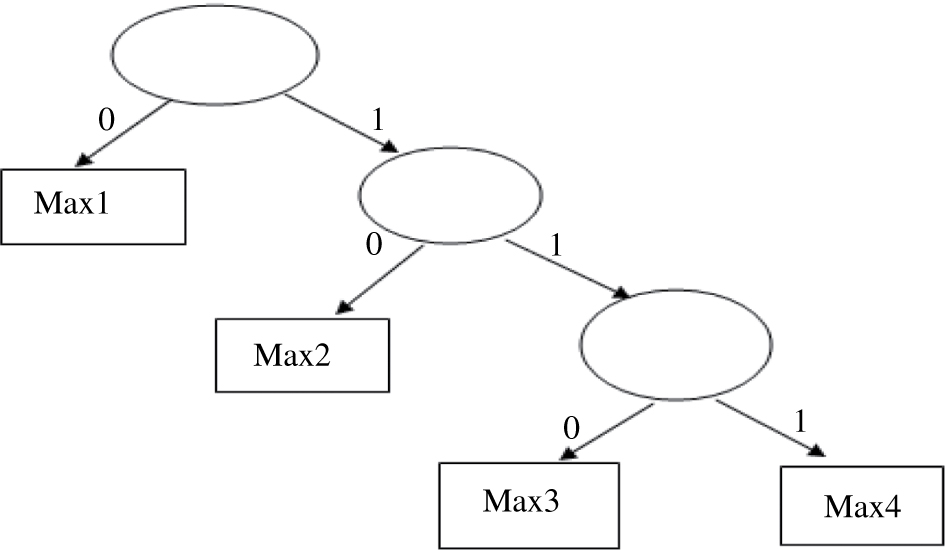 3.4 Compression of the Sequence

Now save the encrypted sequence to get the compressed file. The pseudo code of the proposed compression method is displayed below.

3.5 Decompression of the Sequence

Decompression is important to get the original file from the compressed file. The proposed algorithm is a lossless compression algorithm. So, without losing any data the original file will be retrieved. To decompress the previously compressed file, first it needs to be read in R environment. Then we compare the last 6 bits with the assigned 2-bit number to detect max1, max2, max3 and max4 frequency base. After finding the max1, max2, max3, max4 bases we remove the last 6 binary bits, then we replace 0 by the base which has the maximum frequency base (max1), replace 10 by the second maximum base (max2), replace 110 by the third maximum base (max3) and 111 by the minimum base (max4). The sequence is now decompressed. We write or save the sequence into a FASTA-format to get the original sequence back. The pseudo code of the decompression method is depicted below.

3.6 Measurement of Compression Ratio with Examples

Compression ratio is denoted by,

L(b) = length of path in the tree (number of edges in the generated tree) from root to external node labeled i = 1 to max n = 3.

F(b) = Frequency of bases in the sequence. 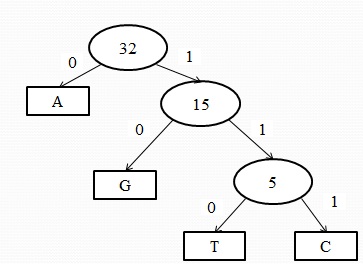 The generated tree for this sequence is shown in Figure 4. 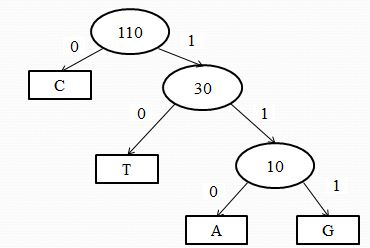 The generated tree for this example is displayed in Figure 5. 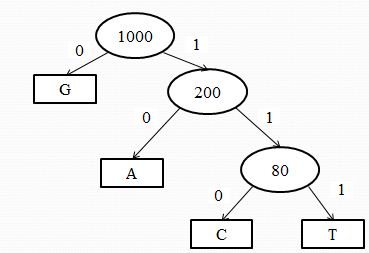 DNA sequence is a sequence with only four bases (a, c, g, t) of large numbers. For this analysis ‘DENGUE’ DNA sequence is downloaded and saved in FASTA-format using R. The downloaded DNA sequence containing 10735 bases is then read in R for pre-processing and further analysis. The top 630 bases of the sequence are displayed in Figure 6. 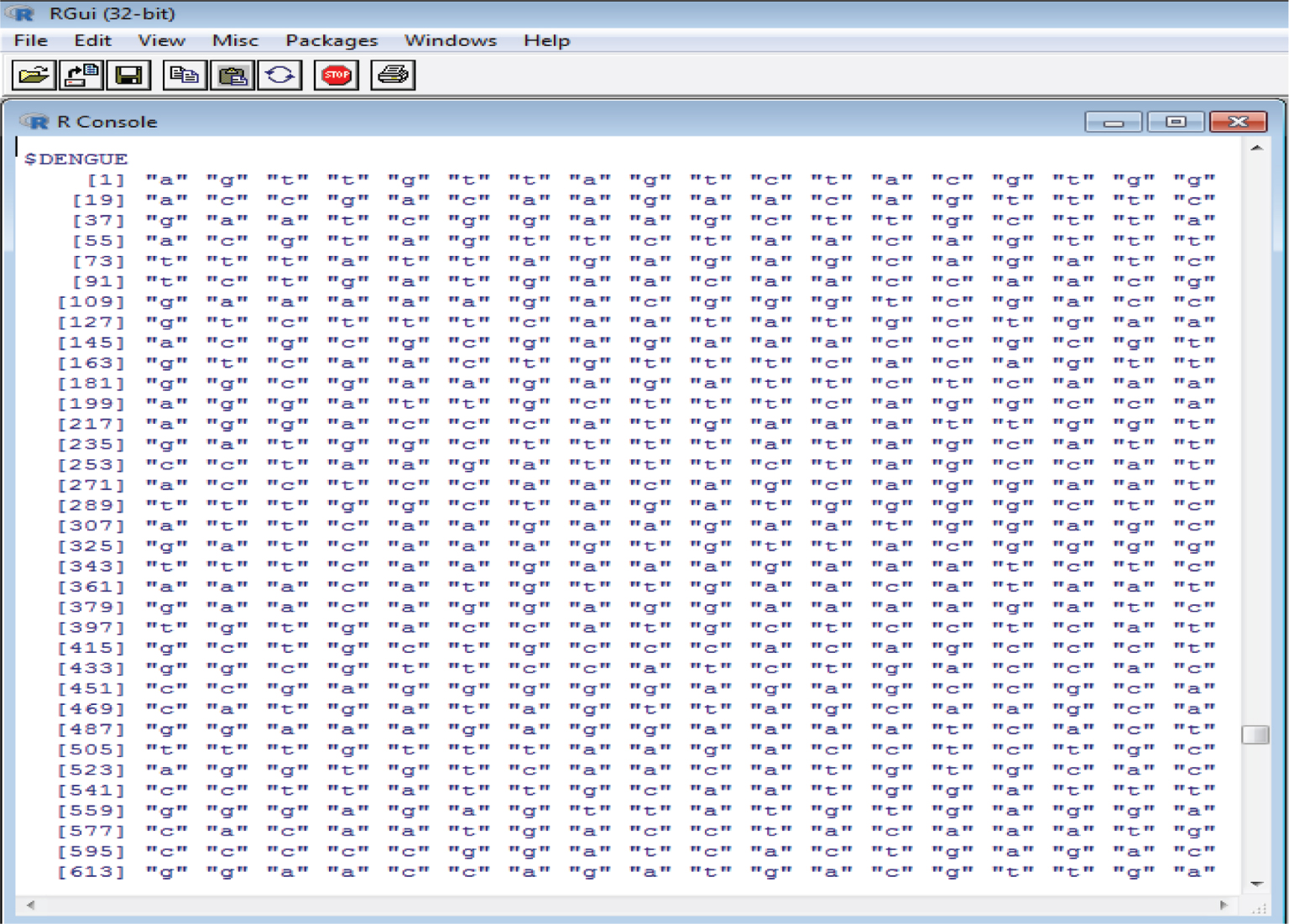 Before starting the compression method, some operations must be performed on the DNA sequence such as finding out the length of the sequence; count the frequency of bases etc. Then the compression method begins with findings of the max1, max2, max3 and max4 base and replacing them with the binary value generated from the extended binary tree. Assigning A = 00, C = 01, G = 10 and T = 11 and at the last step appending 6 extra bits after the encrypted sequence.

Figure 7 displays the bottom of the compressed sequence. From Figure 7, it is clearly viewed that each of the DNA sequence base is replaced by their corresponding code. As each base is of 8 bits and each binary unit is of 1 bit, it is obvious that the file size will be reduced to a great extent after decompression. In Figure 7, the last 6 bits are each of a 2 bits binary number. Comparing these 6 bits with the assigned binary number a decision can be made in these ways 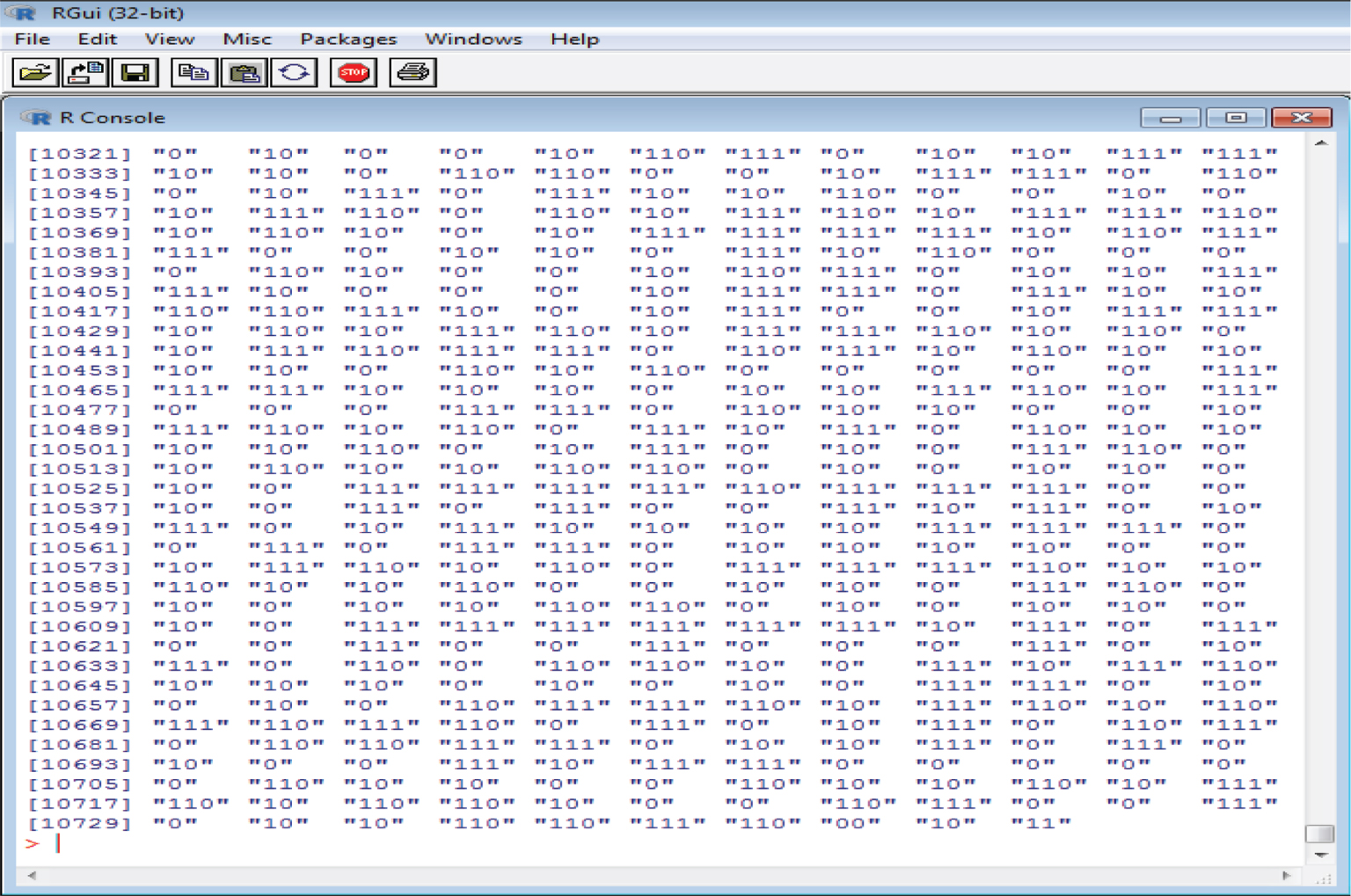 Bottom of the compressed sequence.

During decompression the binary codes will be replaced by their respective DNA bases. For this reason, at first max1, max2, max3 and max4 base need to be identified. To identify them, read the decompressed sequence in R and compare the last 6 bits of the sequence with the assigned binary bits. Based on this comparison, find the max1, max2, max3 and max4 base of the sequence. Then remove the last 6 binary bits and replace the binary codes with their corresponding bases such as, 0 by max1, 10 by max2, 110 by max3 and 111 by max4. Thus the original DNA sequence will be found. Save and store the sequence. The decompressed sequence will look like the downloaded DNA sequence as in Figure 6.

5.1 Comparison with Prior Algorithms

The most natural benchmark of the proposed algorithm is a comparison with the other compression algorithms designed to compress DNA sequences.

Nevertheless, the proposed algorithm performs better in most cases.

DNA compression is an important topic in bioinformatics which helps in storage, manipulation and transformation of large DNA sequences. If the sequence is compressed using Modified HuffBit Compress algorithm, it will be easier to compress large bytes of DNA sequences with better compression ratio. An advantage of the proposed algorithm is, it works well for large sequences. So, it can be helpful to save storage problem greatly. Moreover, it uses less time, memory and easy to implement using R. This research also creates a new dimension of using R in DNA compression which is the main potentiality of the research work. The future work of the research is to overcome the limitations of the proposed algorithm and to come with a better outcome.

The authors are grateful to the participants who contributed to this research. No financial support is provided from any organization during the research project.

[23] Ghoshdastider U, Saha B. GenomeCompress: a novel algorithm for DNA compression, 2007.Search in Google Scholar

This work is licensed under the Creative Commons Attribution-NonCommercial-NoDerivatives 3.0 License.