We examined blood smears of 33 patients with β-thalassemia minor by light microscopy for the occurrence of 15 defined RBC abnormalities. In the case of positivity, the abnormal cells/20 high power fields (HPF) at 1000-fold magnification were counted.

Morphological abnormalities of erythrocytes are common in peripheral blood (PB) smears of patients with β-thalassemia minor. In this study, anisocytosis, poikilocytosis and target cells were apparent in all, and ovalocytes, elliptocytes, cells with basophilic stippling, dacryocytes, stomatocytes and irregularly contracted cells were observed in the majority of the analyzed slides. Our observations may be useful to improve the differential diagnosis of anemia in clinical laboratory routine.

The slides were anonymized and coded (C.R.) and were examined in a blinded fashion by light microscopy (Zeiss Axioskop, Zeiss, Germany) by a specially trained analyst (C.K.).

RBC abnormalities were first assessed as present (positive) or not present (negative), and were quantified in case of positivity as cells per 20 high power fields (HPF) at 1000-fold magnification (oil immersion). RBC abnormalities were defined according to standard hematologic literature [2], [7], [8]. The blood films were examined for the following abnormalities: anisocytosis, poikilocytosis, basophilic stippling, target cells, irregularly contracted cells, dacryocytes, schistocytes, elliptocytes, ovalocytes, pincer cells, stomatocytes, bite cells/degmacytes, erythroblasts, blister cells/prekeratocytes and Howell-Jolly bodies. The data were assessed as n (%) for positive samples and median (range) for the description of the abnormal cell counts.

This study was approved by the Ethics Committees of the Medical University of Graz and the Hospital of the Brothers of St. John of God, Graz and was performed in accordance with the Declaration of Helsinki.

Overall, PB smears of 33 patients with β-thalassemia minor were analyzed in this study, the demographic and laboratory characteristics are presented in Table 1. Data analysis of the automated blood cell count parameters showed hypochromia and microcytosis in all subjects, erythrocytosis was commonly found. Mild anemia was apparent in 15 subjects.

Demographic and laboratory characteristics of the study population.

Anisocytosis, poikilocytosis and target cells were found in all 33, and ovalocytes in 32 (96.9 %) subjects. Dacryocytes (81.8%), stomatocytes (81.8%), elliptocytes (75.8%), cells with basophilic stippling (72.7%) and irregularly contracted cells (63.6%) were frequently, and schistocytes (15.2%), bite cells (6%) and pincer cells (3%) were occasionally found. Erythroblasts, blister cells and Howell-Jolly bodies did not occur. In the positive samples, the highest numbers of abnormal cells per 20 HPF were counted for target cells (median 42/20 HPF), ovalocytes (median 10/20 HPF) and stomatocytes (median 10/20 HPF). The other abnormal RBC forms occurred in low numbers, with a median cell count per 20 HPF between 1 and 7. The prevalence of the morphological RBC abnormalities and the cell counts are described in detail in Table 2. Figure 1 shows microscopic images of the most frequently observed RBC abnormalities.

Occurrence of abnormalities of erythrocyte morphology in 33 subjects with β-thalassemia minor.

The number of cells has been determined by light microscopy at 1000-fold magnification. HPF, high power fields. 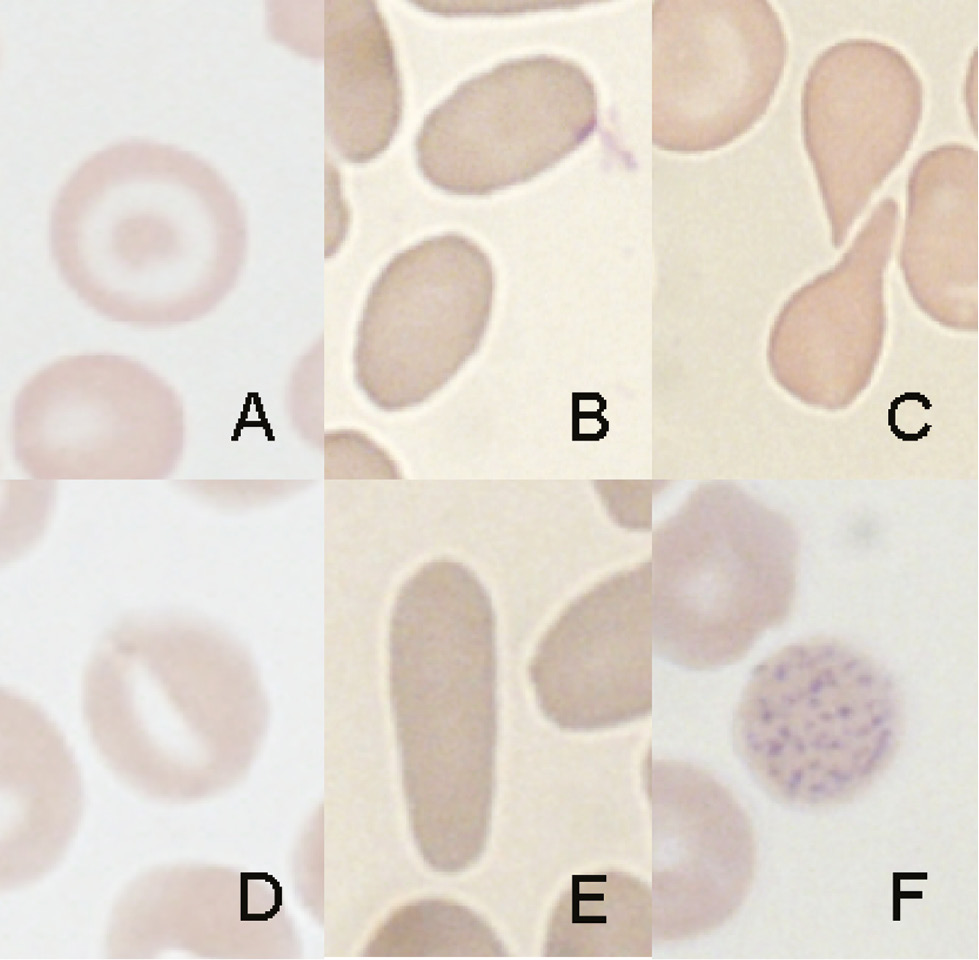 The most frequent red blood cell abnormalities in patients with β-thalassemia minor.

The examination of PB smears represents a widespread and beneficial technique in the diagnosis of various RBC disorders. In β-thalassemia minor, previous studies were mostly restricted to a few quantified abnormal morphologic features [5], [6], [9]. To our knowledge, quantitative morphologic analysis of a broader spectrum of poikilocyte subtypes has not been undertaken so far. We thus performed the current study in order to determine the prevalence of 15 defined morphological RBC abnormalities in the PB smears of 33 subjects with β-thalassemia minor and to quantify the abnormal cells in case of positivity.

In our study population, all patients had numeric as well as morphological abnormalities such as anisocytosis, poikilocytosis and target cells. Except for the three types of abnormalities, all other defined pathologic erythrocyte forms were observed with varying prevalence and numbers.

The frequent occurrence of target cells (n=33, 100%) and cells with basophilic stippling (n=24, 72.7%) partially corresponds with former literature. In a large Spanish population (n=825) with β-thalassemia trait, RBC morphology was altered in the vast majority of study participants, with basophilic stippling in 96% [6]. Contradictory results on the prevalence of basophilic stippling were reported in a prior study on 30 cases with β-thalassemia minor, showing a much lower prevalence (5/30, 17%) [5] than in our study and in the study by Calero et al. [6]. In accordance with our results, target cells were apparent in 28 of 30 subjects (93%) in that study [5].

In another study on the contribution of RBC morphology to the diagnosis of β-thalassemia trait, the authors defined the presence of both basophilic stippling and either microcytosis or target cells as “experimental” morphologic criteria, and microcytosis and poikilocytosis as “control” criteria. Using these criteria, 59 patients with β-thalassemia trait, 60 subjects with other causes for microcytosis and 64 nonmicrocytic subjects were evaluated in a blinded fashion. They reported a moderate sensitivity of 73% for both sets of criteria, but a specificity of 99% and a predictive value of 98% for the experimental criteria [9].

Anisocytosis and poikilocytosis, which were found in all of our analyzed slides, have previously been described as frequent morphologic features in β-thalassemia carriers [2], [3], [7]. However, clear data on the occurrence of further abnormalities than those described above have rarely been published and showed contrary results compared to our findings. In a previous study, prekeratocytes were observed in 11 of 30 subjects (37%) [5], but not in any patient of our study population. In the same study pencil cells, which are elliptocytes, were documented in 9 of 30 subjects (30%) [5], but in 75.8% of our study participants. According to hematologic standard literature, elliptocytes are not a typical feature of β-thalassemia minor, but may markedly occur in rare cases [2]. Irregularly contracted cells have been found in low numbers in some patients [2], but were more frequently observed in the current study (63.6%).

In conclusion, our findings indicate that morphological abnormalities of erythrocytes are common in PB smears of patients with β-thalassemia minor. Thereby, anisocytosis, poikilocytosis and target cells were apparent in all, and ovalocytes, elliptocytes, cells with basophilic stippling, dacryocytes, stomatocytes and irregularly contracted cells were observed in the majority of the analyzed slides. Our observations may be useful to improve the differential diagnosis of anemia in clinical laboratory routine.

This article is distributed under the terms of the Creative Commons Attribution Non-Commercial License, which permits unrestricted non-commercial use, distribution, and reproduction in any medium, provided the original work is properly cited.