By 2050 the global number of elderly dependent people will supposedly have reached 277 million (Prince et al., 2013) with approximately every fourth Western citizen being over the age of 65 (Cracknell, 2010). This demographic change poses an increasing burden with incurred economic, infrastructural, and last but not least large social expenses – especially if it comes down to decline of cognitive function in the elderly. Thus, there is an urgent need for a better understanding of such cognitive decline in order to develop strategies for maintaining and improving mental health and quality of life in the elderly population. The DFG funded research program RTG 2413 SynAGE (http://www.synage.de) deals with the idea that cognitive decline in normal aging results from subtle synaptic alterations that impart an imbalance between stability and plastic properties of spine synapses and that is qualitatively different from neurodegeneration. This will further involve changes in the properties and functionality of the extracellular matrix, communication and interaction with glia cells and cells of the immune system, neuromodulation, and ultimately otherwise compensatory mechanisms. In total 13 PhD and 26 MD students aim to understand these processes of synaptic aging from a molecular, cellular, as well as behavioral angle by jointly addressing four transversal, intimately linked themes: (i) altered synaptic proteostasis and (ii) altered functionality of the multipartite synapse accompanied by (iii) dysfunctions of the immune system and (iv) changes in neuromodulation as core and key components for cognitive decline. The RTG 2413 puts special emphasis to include medical students into the program to foster the understanding of the importance of translational research and at the same time to improve the scientific training of MD students from an early stage onwards and allow them to develop into clinician scientists. 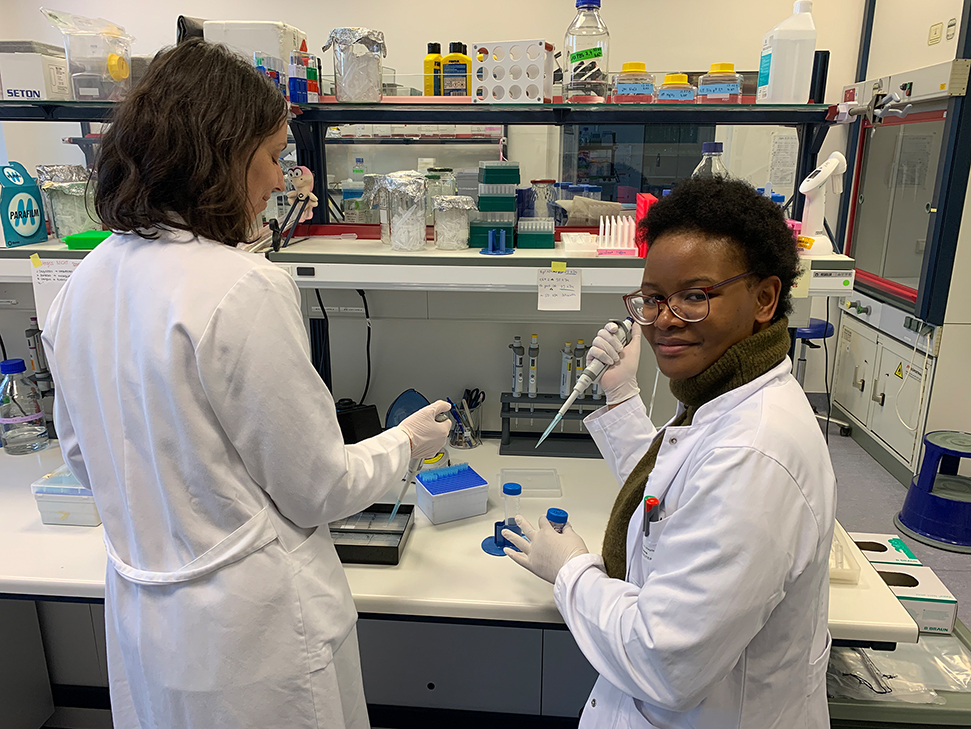 Current research in the field of aging focuses mainly on dementia and associated neurodegenerative diseases. Much less investigated are the consequences of normal aging as such for synaptic, cellular, and neuronal network properties. Normal aging is associated with a decline in sensory, motor, and cognitive function, in particular working memory, cognitive flexibility and multi-tasking capacity, and although relatively mild as compared to dementia, this negatively impacts on health and life quality. In fact, there is now ample evidence that not only genetic factors contribute to the course of aging but also individual lifestyle habits such as rich diet, little to no exercise, stress, provoked development of the metabolic syndrome, vascular alterations, all of which negatively impact on cognitive function in the elderly as well. Early work in non-human primates implicated neuronal cell loss as cause for cognitive decline, but studies in the human brain yielded conflicting results. An increasing number of studies now instead suggest that alterations in synaptic proteostasis and resulting impairments in synaptic neurotransmission and neuronal excitability might account for cognitive deficits in the elderly (Morrison and Baxter, 2012). Furthermore, as the brain ages glial cells become more activated, neurotransmitter levels are changed, proteins as well as pigments accumulate intracellularly, and neurovascular changes become more and more evident. The changes are subtle in nature and do not lead to gross morphological and structural defects although synapse loss in the range of 10–30% has been reported in humans, rodents and non-human primates (Morrison and Baxter, 2012). Thus, similar to early stages of neurodegenerative diseases, synapse alterations rather than neuronal cell death may cause neuronal dysfunction in normal aging. At present, however, very little is known about the mechanisms underlying mild age-related synaptic dysfunction and the cellular and molecular events responsible for this decline. Even fundamental questions concerning the change of cellular properties of neurons during normal aging have not been addressed systematically yet. This lack of knowledge greatly hampers every attempt to understand whether identified pathological hallmarks represent processes directly involved in neuropathology or protective/compensatory mechanisms that increase as the pathology progresses.

To approach this multifaceted field of research, international, interdisciplinary, highly motivated young scientists with excellent qualification in their respective studies were recruited. After preselection of the applicants based on their submitted documents, a two-day symposium at which the candidates presented their previous work was organized. Here they got the opportunity to interact with the faculty and their fellow doctoral students. Right after, MD students were attracted by a recruitment night to get in contact with SynAGE PIs and PhD students. All recruited students are given the opportunity to work with cutting-edge technologies and emergent techniques. Moreover, SynAGE promotes international visibility of their students at an early stage of their career and gives chances for intensive networking to promote career track development in- and outside of academia. Enhancing the career perspectives and employability of researchers and sustained contribution to their skills development is a core principle of that structured and individualized supervision and training PhD and MD program. To identify individual needs and, hence, implement measures accordingly, the students assess themselves with the help of an ‘Individual Development Plan’, provided by the local CBBS Graduate Program (CBBS GP, http://gp.cbbs.eu). Both, the neurospecific CBBS GP and the Otto von Guericke Graduate Academy, ensure high quality standards for education of graduate students serving as central service unit for doctoral students and postdocs. Another pillar that characterizes SynAGE is the strong involvement of postdocs striving to build up their own research from each lab in the experimental training program as well as in the lectures, seminars, workshops, retreats, summer/winter schools, and symposia. The organization of a Satellite Symposium on the occasion of the traditional international Learning and Memory Meeting in March 2020 in Magdeburg is representive for this. The postdoc network that is organized behind the RTG 2413 with the structural help of the cbbs graduate program is providing excellent cosupervision and at the same time career support through participation in general training courses as well as experimental courses focusing on individual needs of the postdoctoral researcher.

The RTG 2413 accomplished to combine basic experimental research on the molecular and cellular level with clinically relevant implications to understand mechanisms of cognitive decline and to develop therapeutic intervention strategies in healthy aging elderly. This endeavor relies on the joint collaborative, crossdisciplinary training of the RTG PhD students and medical doctorates providing them with the necessary skills for their own project and beyond. Through the tight collaborations of basic research groups working with animal models and even joined supervisions with clinics and human-based research, the students will gain invaluable insights into translational research. Moreover, SynAGE collaborates within the Center for Behavioral Brain Sciences CBBS, the local Health Campus: Immunology, Infectiology and Inflammation GC-I3, the Center Dynamic Systems and Biosystems Engineering CDS and the Research Training Group RTG 2408 “Maladaptive processes across physiological barriers in chronic diseases” as well as with international groups offering a competitive and instructive environment. 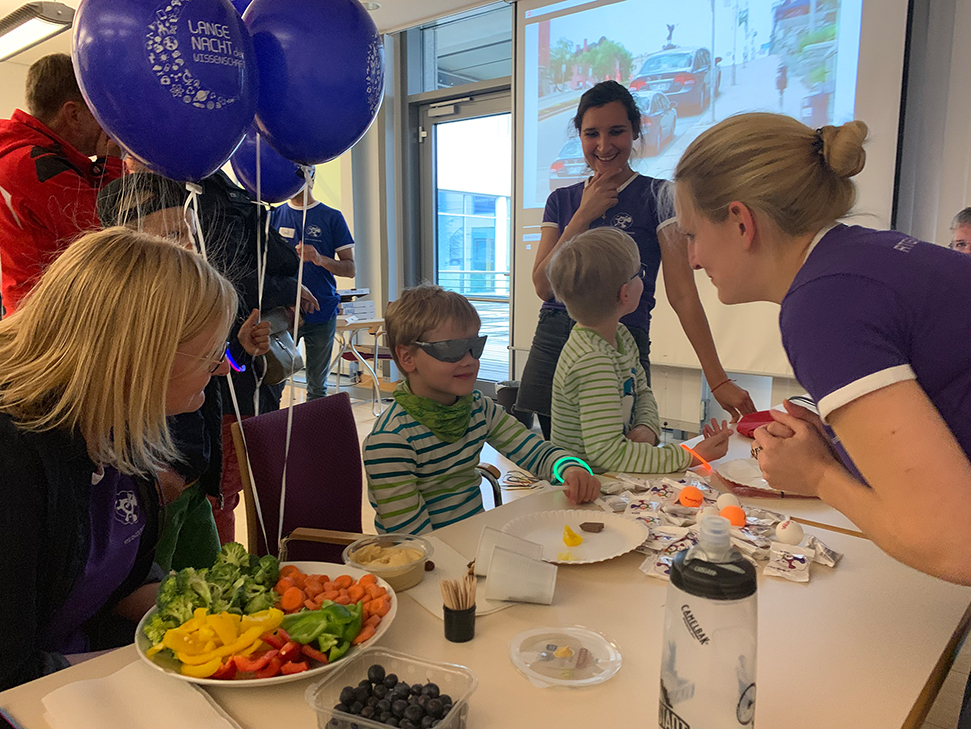 Public outreach activities of the RTG 2413. Long Night of Sciences 2019. Photo: A. Dirks/SynAGE

Besides conveying international conferences, summer and winter schools to Magdeburg, the SynAGE team of molecular/cellular and systems neurobiologists is involved in the organization of outreach activities like the annual Long Night of Sciences, the Company Relay and for the first time also bringing the Diversity Day to the Otto von Guericke University. Additionally, SynAGE students are proud of being part of the DFG campaign 2020 #DFG 2020 Für das Wissen entscheiden.