Dynamic combinatorial chemistry deals with systems (libraries) of multiple compounds formed by reversible reactions. Interactions of all library components with introduced template molecule are reflected in modification of library composition and are analysed simultaneously. In our studies we investigated a single-substrate dynamic combinatorial library of macrocycles, based on dipicolinic acid diamide, with disulphide bond exchange as the reversible reaction. The library components equipped with hydrogen bond donors interact with anionic guests – carboxylates which act as templates inducing amplification of selected library members. We proved that quantitative analysis of interactions with templates is possible, which led us to a novel method of analysis of association constants of static receptors introduced to the system. With a large set of carboxylates differing in number of anionic groups, size, shape, and flexibility of the linker, we proved that the library is very sensitive to structural parameters of the template. We also showed that with mediation of a photoswitchable azobenzene-based template it is possible to change the library composition by light stimulus. Similarly, with mediation of EDTA the library is sensitive to introduction of metal cations.

In dynamic combinatorial (covalent) chemistry (DCC) [1], [2], [3], [4], [5], [6] a mixture of products is obtained from simple substrates via reversible reactions. The composition of the mixture, called dynamic combinatorial library (DCL), is a consequence of thermodynamic stabilities of the components and the equilibrium can be altered by physical or chemical stimuli. The main focus in the field is the response of libraries of receptors to the introduction of specific guests (templates). A template can bind selectively to some of the library components thus lowering their thermodynamic potential and therefore increasing their abundance in the system.

In the classical static approach, the binding phenomena must be analysed by spectroscopic tools, and in typical experiment interactions between a single host and a single guest are investigated. On contrary, in the dynamic systems all the supramolecular interactions are reflected not only by changes in spectroscopic parameters but also in the abundances of the components of the system, which can be determined in a convenient way, typically by HPLC. Since there are many library components, multiple interactions are analysed in a single experiment. This provides a quite different perspective in an analysis of a network of supramolecular interactions.

Various inorganic salts and organic compounds are employed as templates in DCC studies [7]. We decided to pay special attention to carboxylates [8], [9], [10] acting as templates because of some of their unique features.

We anticipated that these properties may add new value to dynamic systems responding to introduction of the template.

Neutral anion receptors typically possess multiple hydrogen bond donors to bind the guests. Among the very simple hosts, yet capable of binding anions in nonpolar solvents, are amides of dipicolonic acid [11]. Macrocyclic receptors based on this structural motif were intensively explored in our group [12], [13], [14], [15]. These compounds could be obtained from simple starting materials – α,ω-diamine and -diester (Fig. 1a). In such reaction a mixture of macrocyclic compounds and linear polymers is obtained and each macrocycle must be isolated to analyse its anion binding properties. We decided to change our approach by equipping the aliphatic linkers with disulphide groups (Fig. 1b). The latter macrocycles can undergo disulphide group exchange therefore they form a dynamic system where all the macrocycles coexist and interchange. Contrary to the static hosts, their dynamic analogues are analysed simultaneously in a mixture. 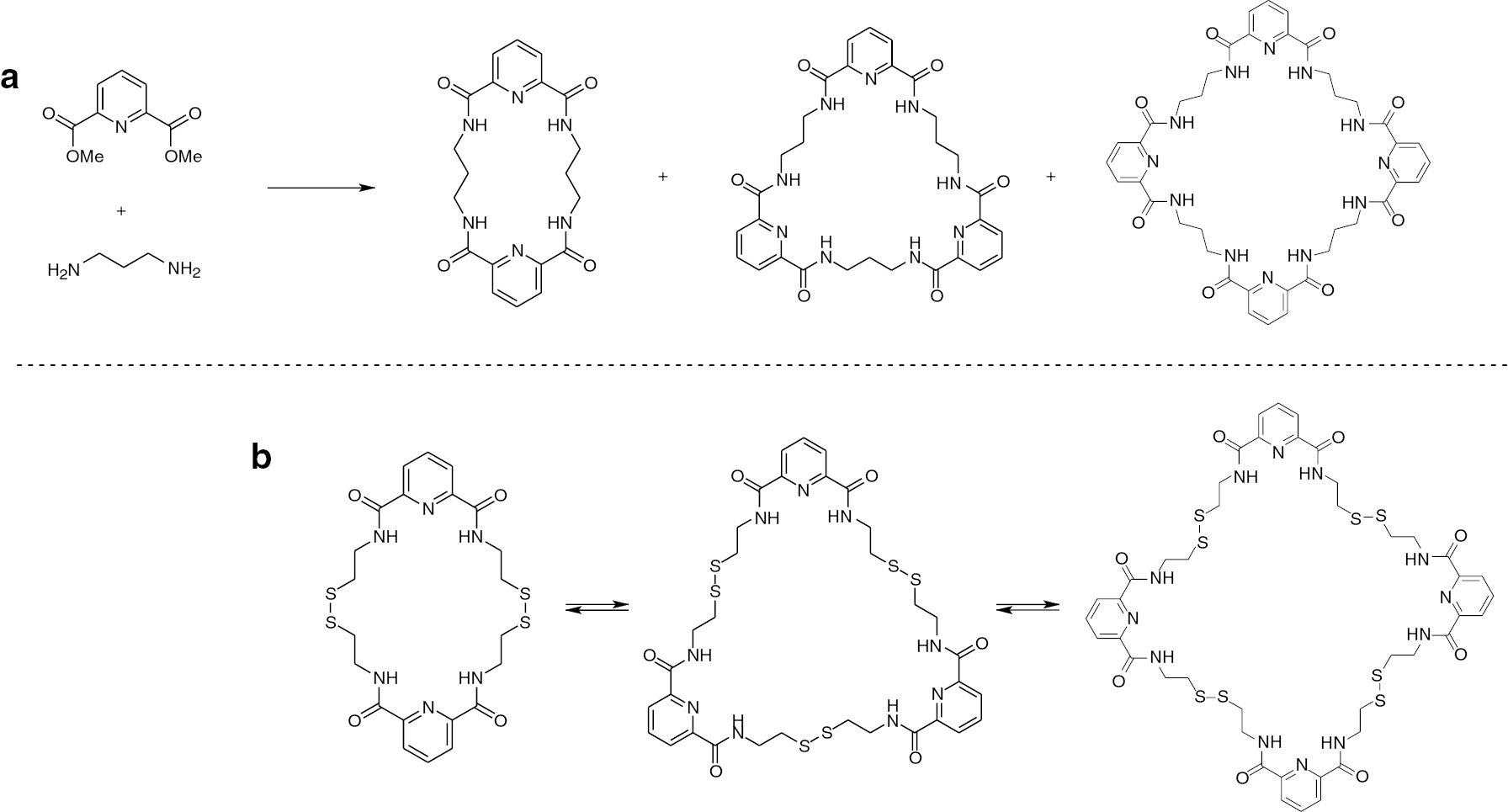 (a) Formation of a classic library of macrocyclic anion receptors; (b) Dynamic combinatorial library of interchangable macrocycles.

The library of macrcocyclic disulphides Mn was obtained by oxidation of dithiol M-H2 (Fig. 2a) [16]. The library consists solely of macrocylic products, but no cyclic monomer was found in the mixture. The DLC proved to be under thermodynamic control under basic conditions in DMSO. The composition of the library can be easily determined by HPLC (Fig. 2b).

(a) Formation of dynamic combinatorial library; (b) HPLC trace of the library showing consecutive macrocylic oligomers.

With the use of DCLfit software by Ludlow et al. [17], we were able to determine all equilibrium constants between library members. The DCL responds to introduction of various carboxylates, which indicates formation of supramolecular complexes between the library members and introduced guests. With a set of templation experiments, association constants for complexes of all library components with the introduced guest were determined. For a simple template such as benzoate we had all crucial thermodynamic parameters determined with high precision.

Since the composition of library depends on the amount of template present, we decided to analyse a system where the library components compete with an additional static receptor in template binding (Fig. 3a). As might be expected, introduction of static host A weakly interacting with beznoate does not significantly affect the composition on the library [18]. In the presence of receptors with higher affinities for the template (B, C), the distribution of DCL products indicated that only a limited amount of benzoate is available for Mn components (Fig. 3b). By freezing the equilibrium within the DCL we can take a snapshot of the entire system, including the interactions of the static host. With several examples we proved that with the use of DCL we can determine quantitatively the association constants of the complexes of static hosts by HPLC analysis (Fig. 3c). 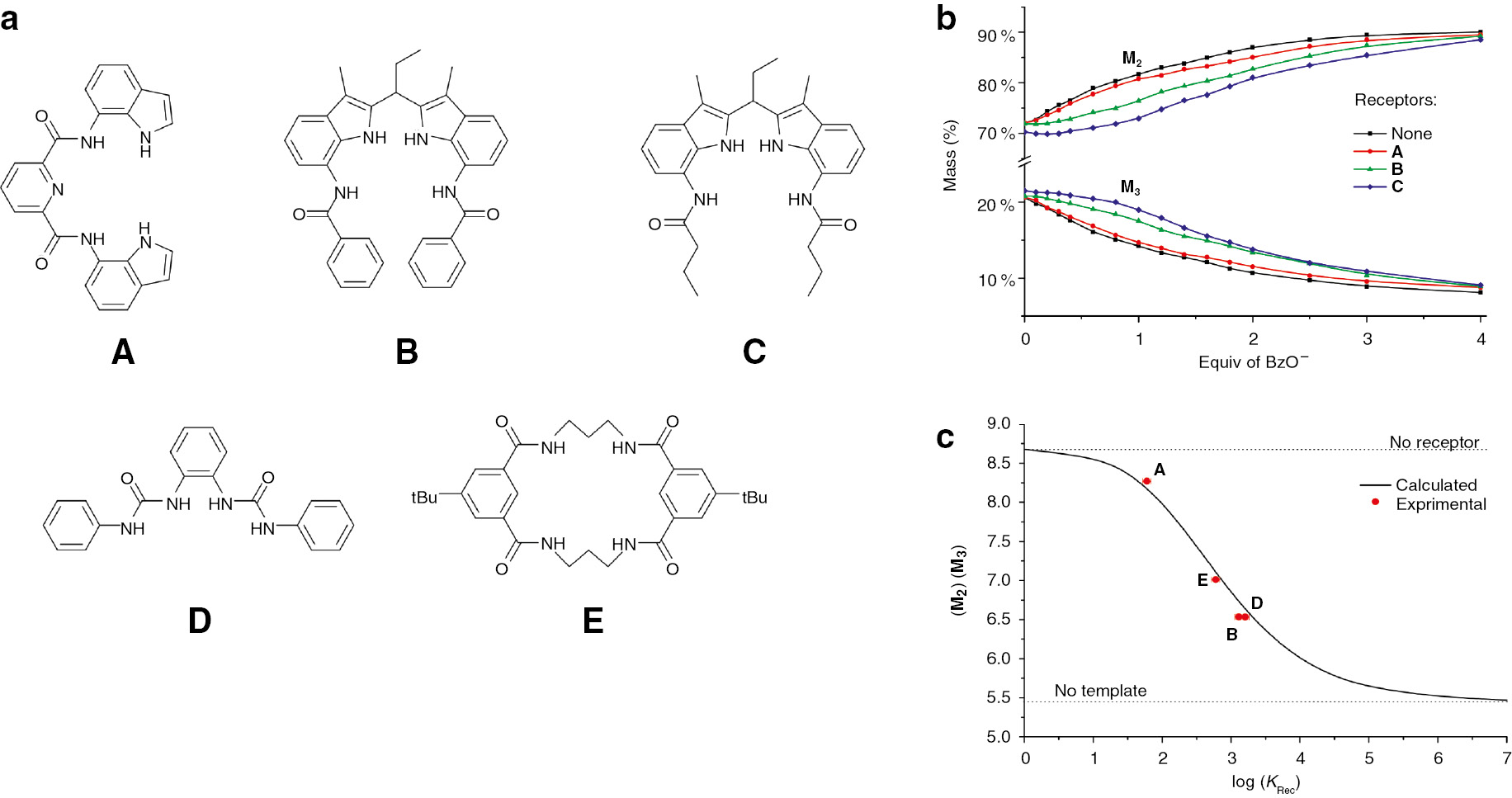 In a next series of experiments we used a large set of carboxylates differing in a number of carboxylic groups, but also length, shape and flexibility of the linker between them. We analysed the response of DCL to introduction of these templates and found some regularities which could be rationalised [16]. The chart of templates and the compositions of the templated libraries are presented in Fig. 4. 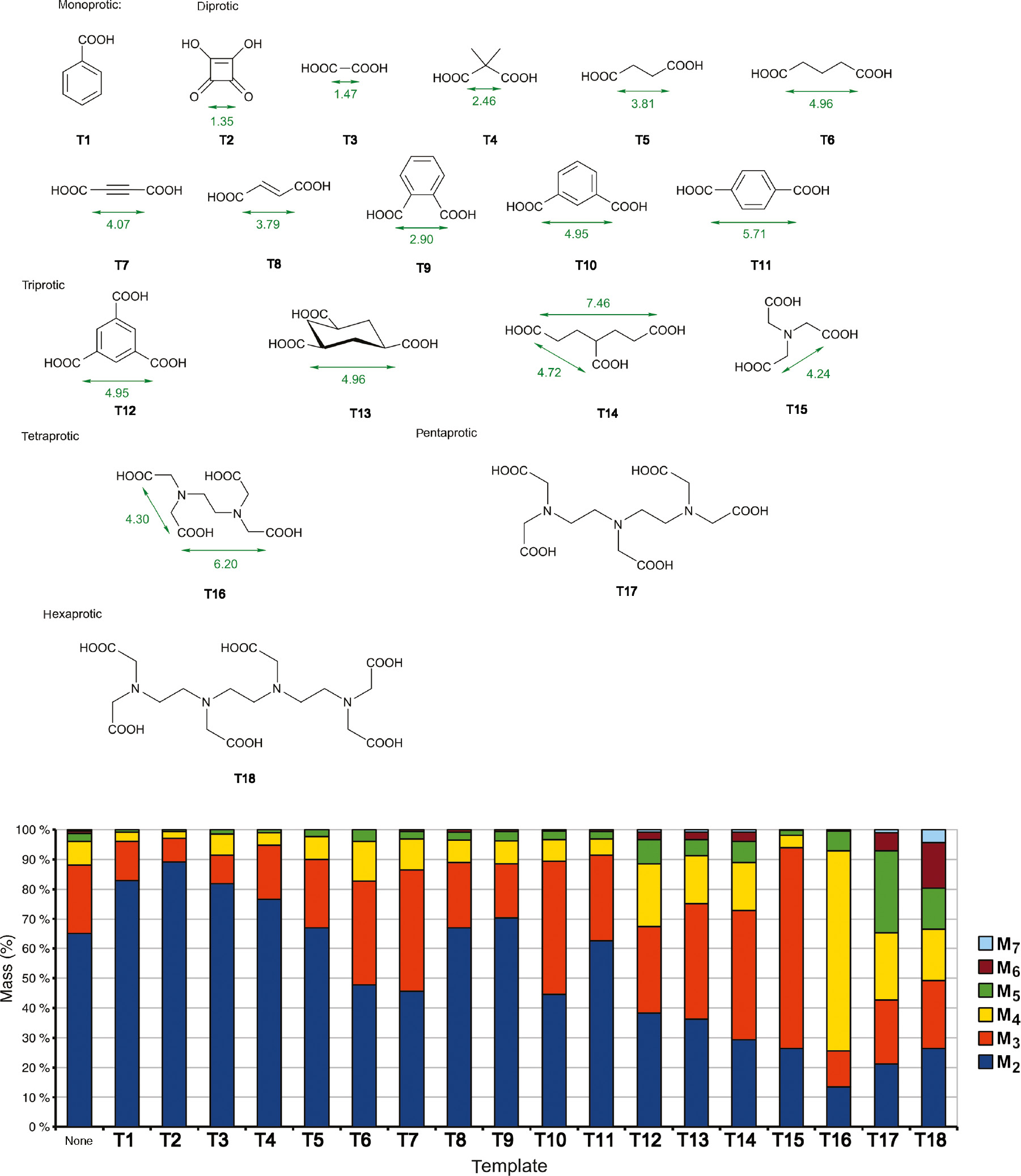 Chart of templates T1–T19 and library compositions induced by these templates.

For the series of dicarboxylates T2–T6 with different distances between anionic groups the small templates effectively amplify the dimeric host M2 , but with increasing length of the linker, the M3/M2 ratio also increases as M2 is no longer suitable to accommodate the larger guests. The three templates T5,T7,T8 bearing two carbon linker with different degree of unsaturation give distinct amplification profiles. The rigid linear acetylenedicarboxylate (T7) amplifies the trimeric host even more strongly than glutarate (T6). The DCL is also capable of distinguishing between the isomers of phthalic acid anions (T9–T11). In this subset the bent isophthalate is well suited for M3. Among the various tricarboxylates the two cyclic ones – T12 and T13 are too large to fit easily into the cavity of M3, and M4 is also amplified. Acyclic T14 and T15 are better suited for the trimeric host, the latter template – nitrolotriacetate – very strongly and selectively amplifies M3 to the level of nearly 70% of the library. With the consecutive members of aminopolycarboxylates (T15–T18) we observed that the most amplified macrocycles were consistent with the numbers of carboxylic gropus in the template. With EDTA (T16) tetrameric host constitutes about 70% of the library, with DTPA (T17) pentamer abundance is over 25%. The largest hexaanionic template TTHA (T18) is not very selective, yet it significantly amplified the very large macrocyles – hexamer (78-member ring) up to 15 and heptamer (91-member ring) up to 5% mass.

These results indicate that with the DCL of Mn we are able to translate the structural parameters of anionic templates into the composition of the library. We believe that with a more complex library, it will be possible to decode the information stored in the amplification profile and determine the geometry of unknown template.

Our DCL is sensitive to any slight differences in templates’ structures, particularly it gives different response for isomeric templates. This observation led us to a concept of finding a factor that cannot influence the library itself, but can affect the geometry of the template. In such case the overall effect would be the impact of the factor on DCL composition via mediation of an appropriate template (Fig. 5).

Schematic representation of a factor affecting the DCL only with mediation of the template.

In our first attempt to realise this concept we utilised azobenzene based photoswitchable carboxylate (T19) as template-mediator and light as a factor [19]. Firstly we found that each photoisomer of the template provides its own distinctive amplification profile (Fig. 6). In case of (E)-T19, the overall templation effect is amplification of M3, which is consistent with the action of the isophthalic part of the template. Contrary, for a more compact(Z)-T19 a cooperative action of all the three anionic groups results in amplification of tetrameric host M4. The later experiments act as a unique observation of shortening the distance between functional groups in the unstable Z-isomer.

Structures of photoisomers of template T19 and their templation effects.

Next, we carried an experiment where an equilibrated mixture of Mn and (E)-T19 was irradiated with UV light. The template did undergo the photoisomerisation, however, we did not observe the expected transformation of DCL composition into a novel equilibrium state. Upon irradiation of the mixture the dynamics in the library become frozen, the mechanism of this phenomenon is under investigation. Only if some unoxidised M-H2 was added to the system, we were able to observe the light-induced, template-mediated modification of DCL composition.

Another system of this kind was constructed with metal cation (Ca2+) acting as a factor and NTA (T15) or EDTA (T16) acting as mediator. The calcium cations do not interact with DCL, but they are strongly bound by the chelators. The metal-ligand complex must possess quite different DCL templating properties. In our preliminary experiments we found that addition of calcium cations indeed affects the library only in the presence of the chelator, but we observed that formation of the metal-ligand complex does not simply turn-off the action of the chelator on the library (Fig. 7). In a mixture of Ca2+ and NTA in 1:1 molar ratio, the library did not return to its native state, which indicates that the metal-ligand complex still acts as a template. Other such systems with different metal cations and chelators are under investigation. 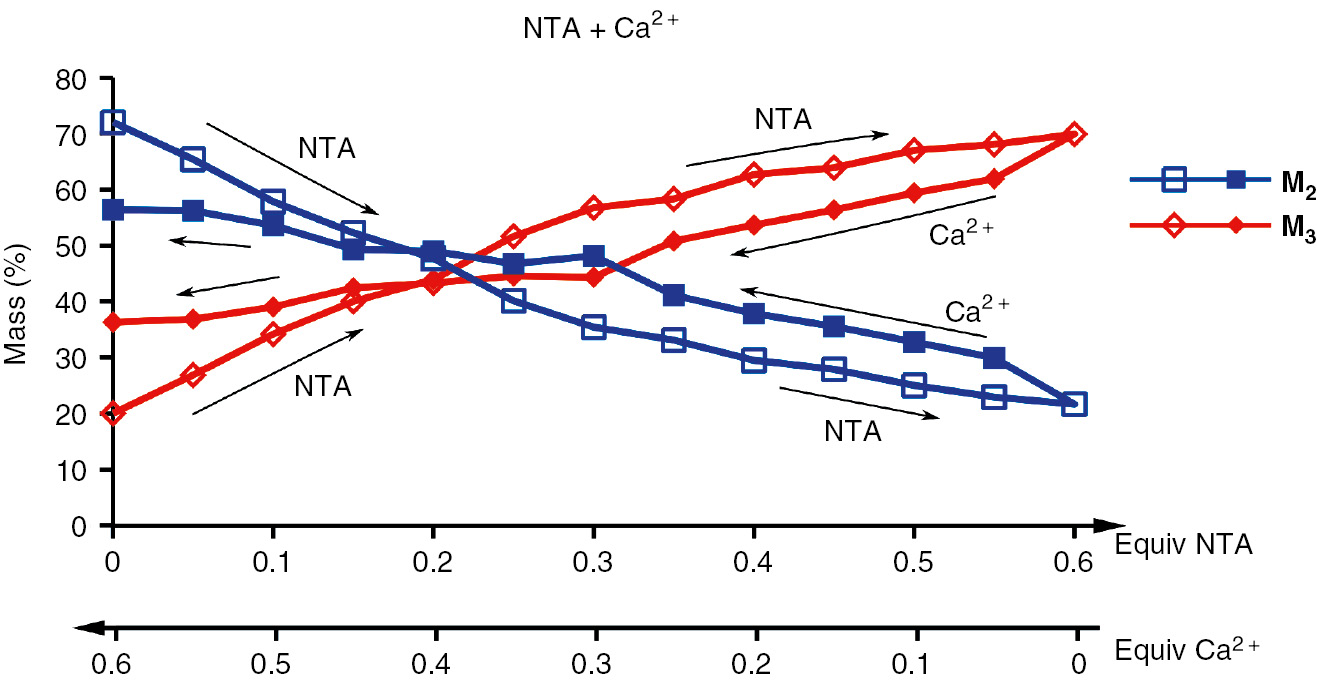 Changes in the composition of dynamic combinatorial library of Mn upon addition of NTA (T16, open symbols) and subsequent addition of Ca2+ cations to the Mn +NTA mixture (full symbols). The library does not return to its native state. Only M2 and M3 are presented for clarity.

In the aforementioned examples we proved that templation of dynamic combinatorial libraries is not only an alternative methodology for searching for novel molecular receptors. Utilising various carboxylates as templates we found some novel features of dynamic systems. We showed that the DCL can be useful in analysing of interactions of static hosts when an appropriate competition for template binding is established. The DCL is very sensitive to variations in template’s geometry and may enable coding its structural parameters in the amplification profile. Finally, we proved that we can modify the composition of the library with different factors in template-mediated processes. The results obtained for these interesting functionalities of the dynamic systems serve so far only as a proof of concept being currently explored with more complex systems. They are promising in mimicking the complex recognition processes and signalling pathways of the biological systems.

A collection of invited papers based on presentations at the 23rd IUPAC Conference on Physical Organic Chemistry (ICPOC-23), Sydney, Australia, 3–8 July 2016.