This work demonstrates the equivalence of two constitutive equations. One is used in Fourier’s law of the heat conduction equation, the other in electric conduction equation; both are based on the numerical Cell Method, using the Finite Formulation (FF-CM). A 3-D pure heat conduction model is proposed. The temperatures are in steady state and there are no internal heat sources. The obtained results are compared with an equivalent model developed using the Finite Elements Method (FEM). The particular case of 2-D was also studied. The errors produced are not significant at less than 0.2%. The number of nodes is the number of the unknowns and equations to resolve. There is no significant gain in precision with increasing density of the mesh.

Fourier’s law of the heat conduction equation applied to stator-airgap-rotor is:

The heat sources, corresponding to Joule effects and magnetic hysteresis and eddy currents, are represented as the vector [W].

The heat produced by mechanical friction is not studied in this work.

The changes in the internal energy, dependent on the component materials of the asynchronous machines, are represented in the following expression:

The Fourier heat transmission equation is treated in 2-D and 3-D. The cartesian absolute coordinates of the cell are converted to local standardized coordinates. The origin is one of the four vertices of the tetrahedron used as cell [1,2,3]. The dual variables are projected to the primal using geometrical methods. Planar symmetries and axisymmetric symmetries are used. Quadratic interpolations are applied to obtain distributions of temperature [1,2,3,4, 5].

The main parameters used in this work are the following:

Using the expression proposed by [6], the matrices exposed in Eq. (5) are topological equivalent:

Where matrix [S] is defined according to (8), following Specogna and F. Trevisan [6],

is the dot product of the vectors that define the dual faces of the cell and (VT) is the volume of the tetrahedron, see Figure 1. 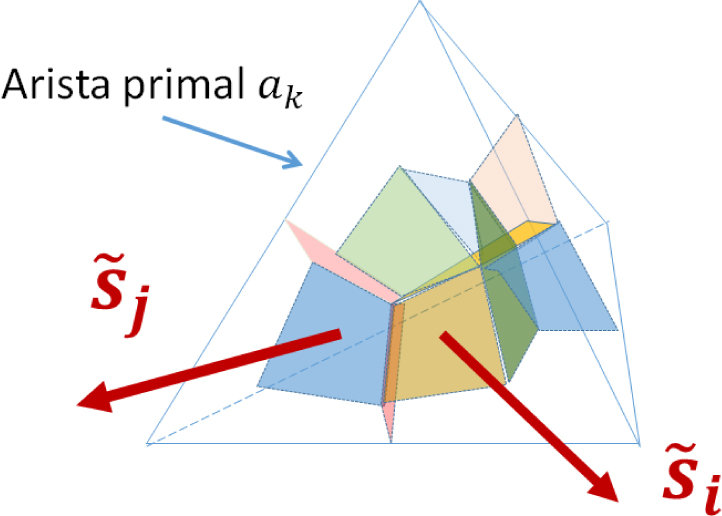 The matrix [Mσ] must be calculated for the electro-thermal phenomena occurring in the asynchronous machine. So why do the calculations twice? Several numerical experiments were designed to confirm this assumption.

The obtained results were contrasted with the results obtained from the same model developed with Finite Element Methods (FEM). The particular caseof 2-D was also studied.

In the numerical experiments, pure conduction of heat is assumed, there are no inner heat sources, and temperatures are stationary, as shown in Eq. (8).

Two boundary conditions, of type Dirichlet, were established. Two temperatures, τout = 30 °C and τin = 80 °C were fixed on two faces of a tube, which represents the rotor or stator of an electric machine.

These faces are axial sides to thetube. The other top face and down face of the tube were considered as perfect heat insulators.

The temperatures are considered in steady state. There are no internal heat sources. Various structural materials with different volumetric thermal conductivity coefficients were reviewed. The volumetric thermal conductivity is λ1 = 50 Wm–1K–1 for the inner tube and λ2 = 193 Wm–1K–1 for the outer one. As there is no heat source inside the domain, the heat flows in a radial direction.

Temperatures are measured in a parametric cut line as shown in Figure 3.

An example square in 2-D, is shown in Figure 2, with sides of 200 cm and a superficial thermal conductivity coefficient equal to 1 WK–1. The rectangular perforations have assigned a temperature τin = 150 °C to their edges. The outer square edge has a temperature τout = 50 °C.The temperatures are considered in steady state. 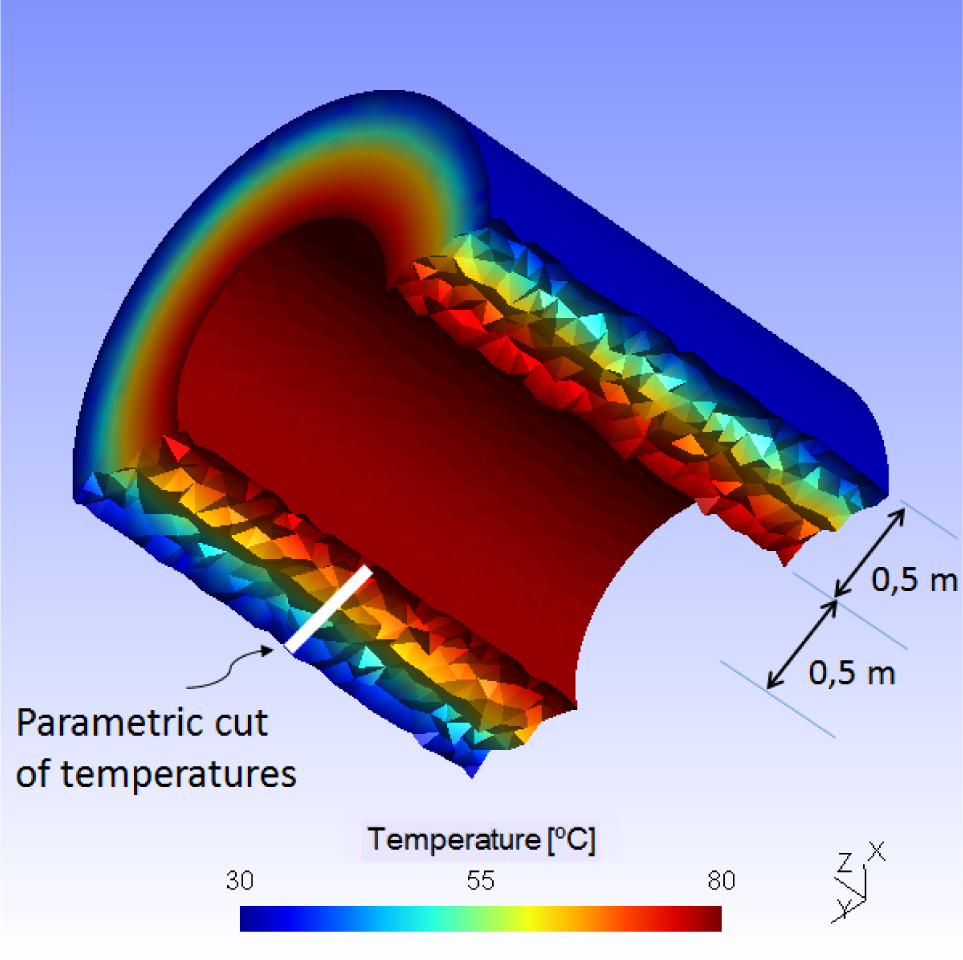 Temperatures are measured in a horizontal parametric cut line at 1 meter from the base of the square, see Figure 2(a).

Different meshes have been used in the model and the temperatures calculated with FF-CM. The meshing and the post-processing of the model in CM have been performed with Gmsh software [7]. The resulting temperatures are compared with the temperatures obtained with a 2-D axisymmetric FEM model using the software FEMM [8]. For a tube in 3-D, the results are showed in Figures 4 and 6. 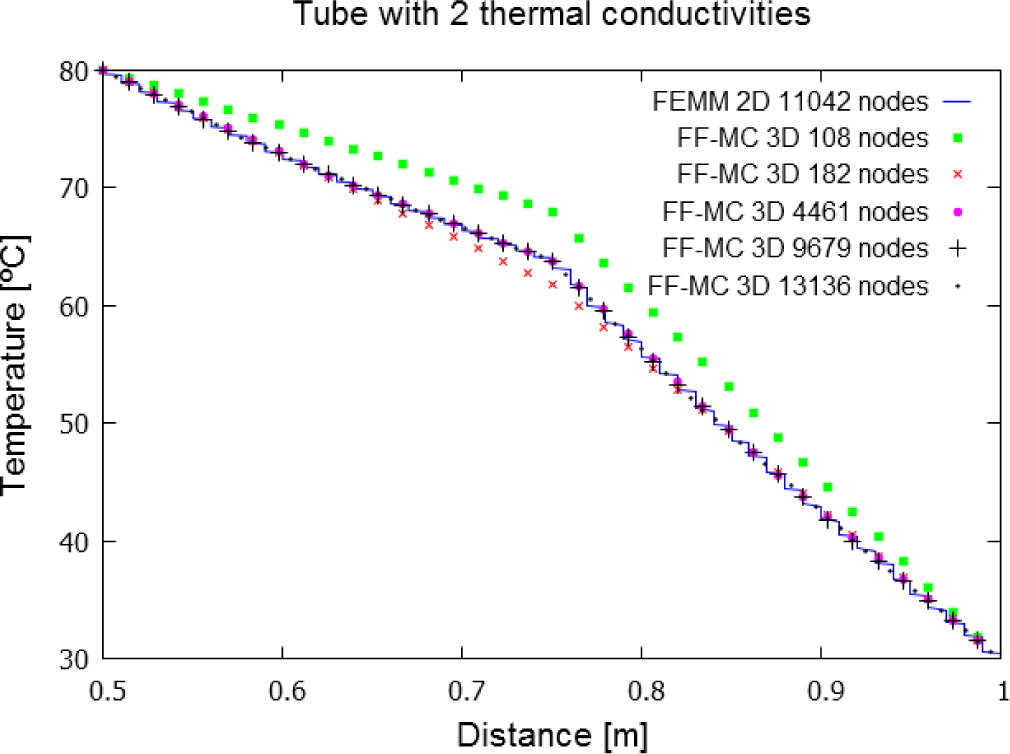 Temperatures in a tube with two thermal conductivity

For a square in 2-D, with one superficial thermal conductivity coefficient, the results are showed in Figure 5. 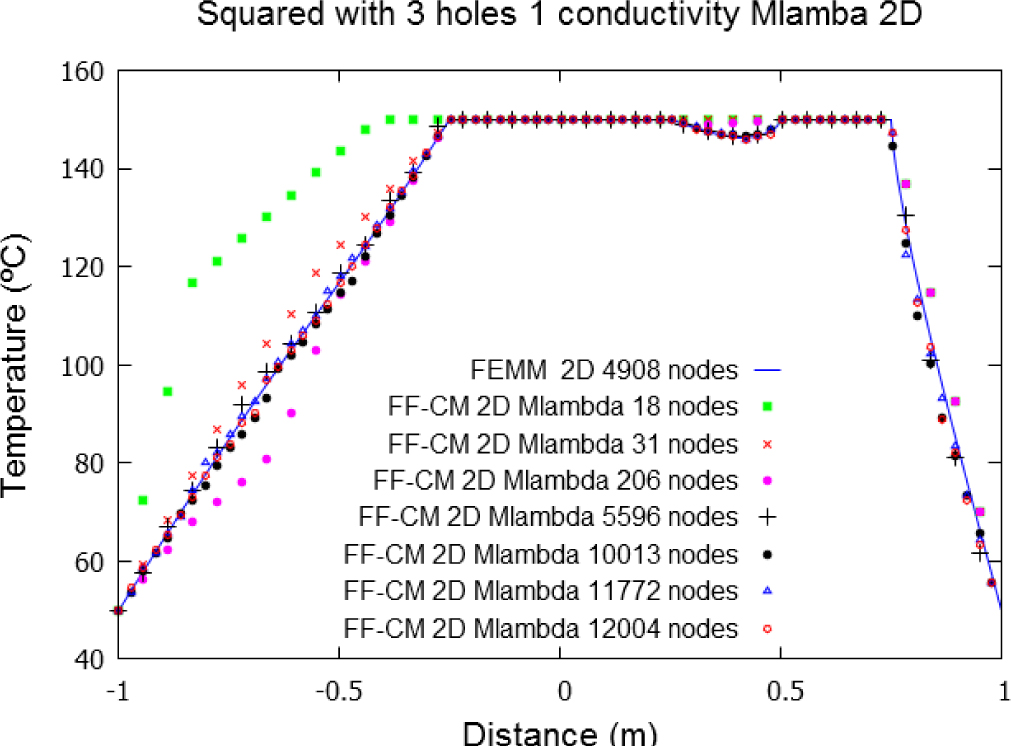 The difference between the normal distribution and the distribution obtained in the error histogram is due to the measurement method (see Figure 6). A parametric cutline is used in the FF-MC model and in the FEMM model, too. Although both parametric cut lines are made at the same distance, the meshes do not match exactly. 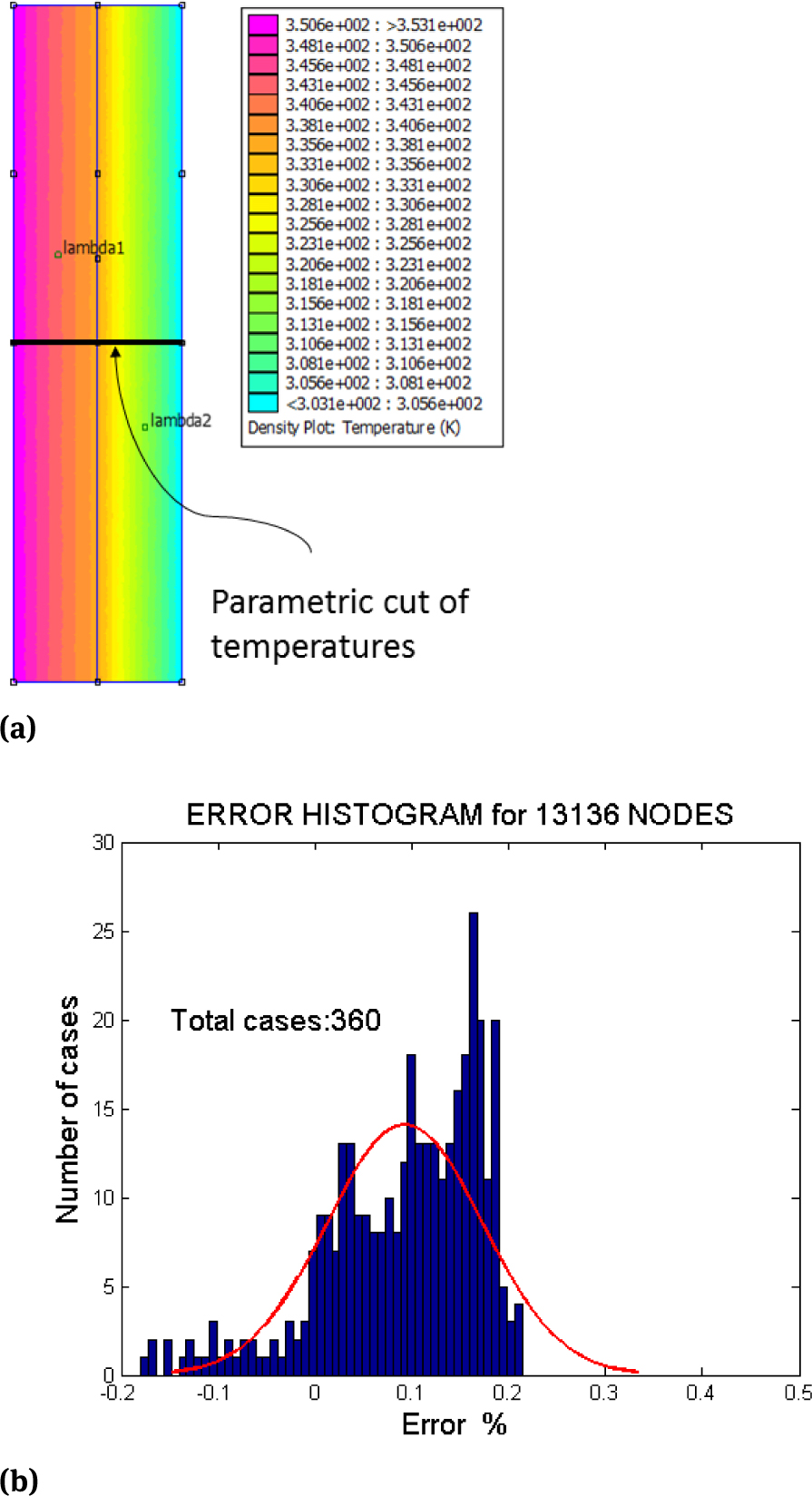 Unfortunately, the interpolations between the values of the nodes of the mesh and the values in the points of the cutline disagree. This is because the mesher of the GMSH is not the same as that of the FEMM.

The FF-CM is a strong method because we face a 3-D model in FF-CM, with a not very dense tetrahedral mesh, with a planar axisymmetric model calculated with FEM and very dense triangular mesh. The errors produced are not significant at less than 0.2%. The number of nodes is the number of unknowns and equations to resolve. There is no significant gain in precision with increasing density of the mesh. In the Figure 4, with 9,679 nodes and 13,136 nodes the errors are similar.

The authors thank the project TEC2014-60527-C2-1-R “SURF: Sistema Subacuático RFID para Acuicultura” from Ministerio de Economía y Competitividad (MINECO) for their contribution to the realization of this work.

This work is licensed under the Creative Commons Attribution-NonCommercial-NoDerivatives 4.0 License.