Analysis of spatial thermal field in a magnetic bearing

Simulation of the temperature distribution is part of the electrical device design process. This is very important when the nominal parameters of an electrical device are strongly increased to the limit. This kind of computation should also be applied when the temperature in the device affects the parameters of its parts. For example, permanent magnets are very sensitive to heating. The magnetic cores of electromagnetic devices are increasingly made from amorphous tape which is sensitive to overheating.

Hybrid magnetic bearings (HMB) with permanent magnets are very effective devices for magnetic suspentions because those magnets can replace the windings with the so called bias current giving the initial suspension. They can also be used in enclosures without a forced cooling system. Temperature calculation is especially important in the design of such bearings even when the devices do not have some external casing. Electrical machines with such bearings should also be designed using simulations of their temperature field.

Analysis of the steady state thermal field in a hybrid magnetic bearing with permanent magnets is presented in this study. Two-dimensional and three-dimensional finite element models have been prepared and used for determination of the temperature distribution. Analysis of such fields is very important for determination of the rated control current density in the windings.

Alternatively, such calculations of the temperature distribution can be used to ascertain the rated current intensity which could cause the overheating and destruction of the permanent magnets in the device.

2 Description of the investigated object

The axonometric projection of the hybrid bearing is given in Fig. 1. This is a six-pole HMB with permanent magnets. The prototype construction of such a magnetic bearing, has been installed in an aluminium housing. 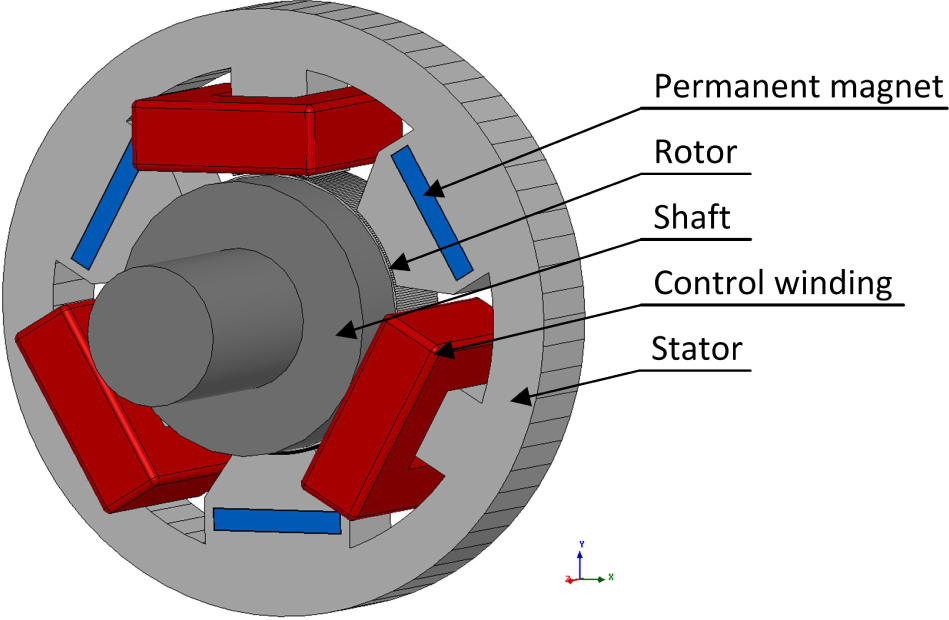 The view of the HMB construction

The HMB consists of the stator and rotor. The stator includes three poles with permanent magnets and the three poles with windings. Each winding has 100 turns made of wire with cross-section of 0.7076 mm2. As the materials used for the winding insulation were in the B temperature class, we did not focus on the overheating of the coil. The stator and rotor are made of non-oriented steel M530-50A. Three permanent magnets N38 of size 20 mm × 3 mm × 25 mm have been mounted in the stator. The permanent magnets are magnetized along their shortest edge. A detailed magnetic field analysis in the presented magnetic bearing is given in [1].

We prepared two thermal models of the HMB. The first was two dimensional and the second was three dimensional. Femm software was used for the preparation and calculation of the temperature within the 2D modelling [2], while Opera 3D Tempo package was applied in the 3D model [3].

According to Fourier’s law for heat conduction, the heat flux density is proportional to the gradient of temperature ∇T, [2]:

where κ is the thermal conductivity. Heat flux density must comply with Gauss law, which states that the heat flux which is coming out any closed volume equals to the heat which is generated within that volume [2]:

where p is the power density generated by Joule’s heat.

Inserting equation (1) into (2), we obtain Poisson’s equation, with the function T which is the temperature distribution being investigated:

Thermal calculations are difficult to execute, mostly due to difficulties in ascertaining the material property data in the analysed area and in determining the boundary conditions. The HMB actuator is a device that consists of few components. Stator and rotor are made from isotropic silicon steel M530-50A, where the silicon content equals to 1.43%. The producer of the silicon steel does not provide information about the thermal conductivity of the stack of sheets. According to [3], the thermal conductivity of silicon steel can vary from 19 W/(m⋅K) to 55 W/(m⋅K) for different silicon contents (from 5% to 0%).

For the mathematical modelling, we made the following assumptions:

where n⃗ denotes the normal vector to the surface and the combined convection coefficient on the surface, which represents heat transfer by convection and radiation. The average value of the hcombined is described by the equation [6]:

The convection heat transfer coefficient hconv was calculated separately for each side of the housing and windings based on empirical correlations for the average Nusselt number for natural convection over the surface [2]. The values of hconv were calculated for ambient temperature Tambient equal to 294 K. The radiation heat transfer coefficient hrad is described [5] by the equation:

where σ is the Stefan–Boltzmann constant and ε is the emissivity of the surface. Heat transfer by radiation of the aluminium housing was calculated for the emissivity ε = 0.1, while heat transfer by radiation from the copper windings was calculated for the emissivity ε = 0.2 [2]. Calculation of the heat transfer coefficient is a difficult task because coefficients are nonlinear functions of temperature. In order to reduce the complexity of solving the model, the combined convection coefficients were approximated by a linear function. Figure 2 shows the values of the combined convection coefficient calculated within a temperature range from 290 K to 400 K for different surfaces of the model. 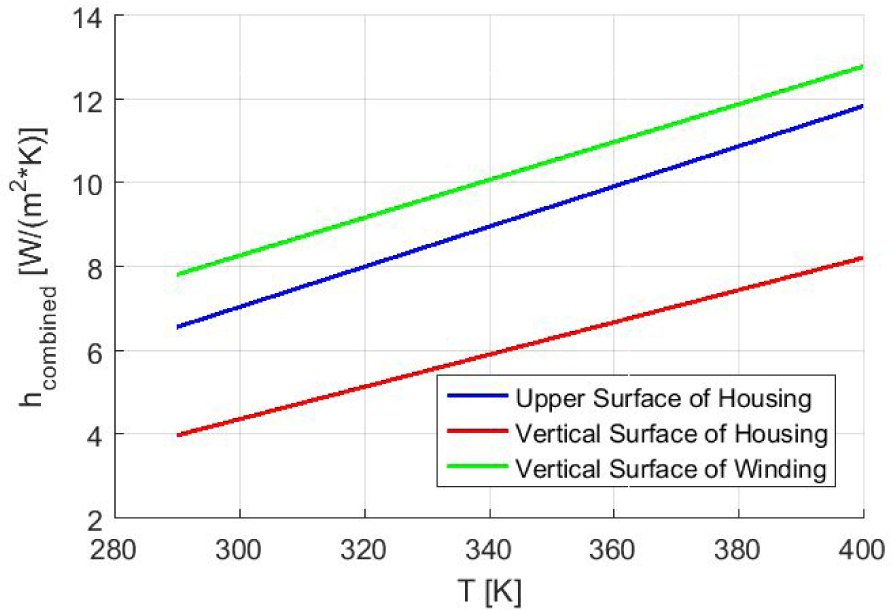 Values of the combined transfer coeflcients 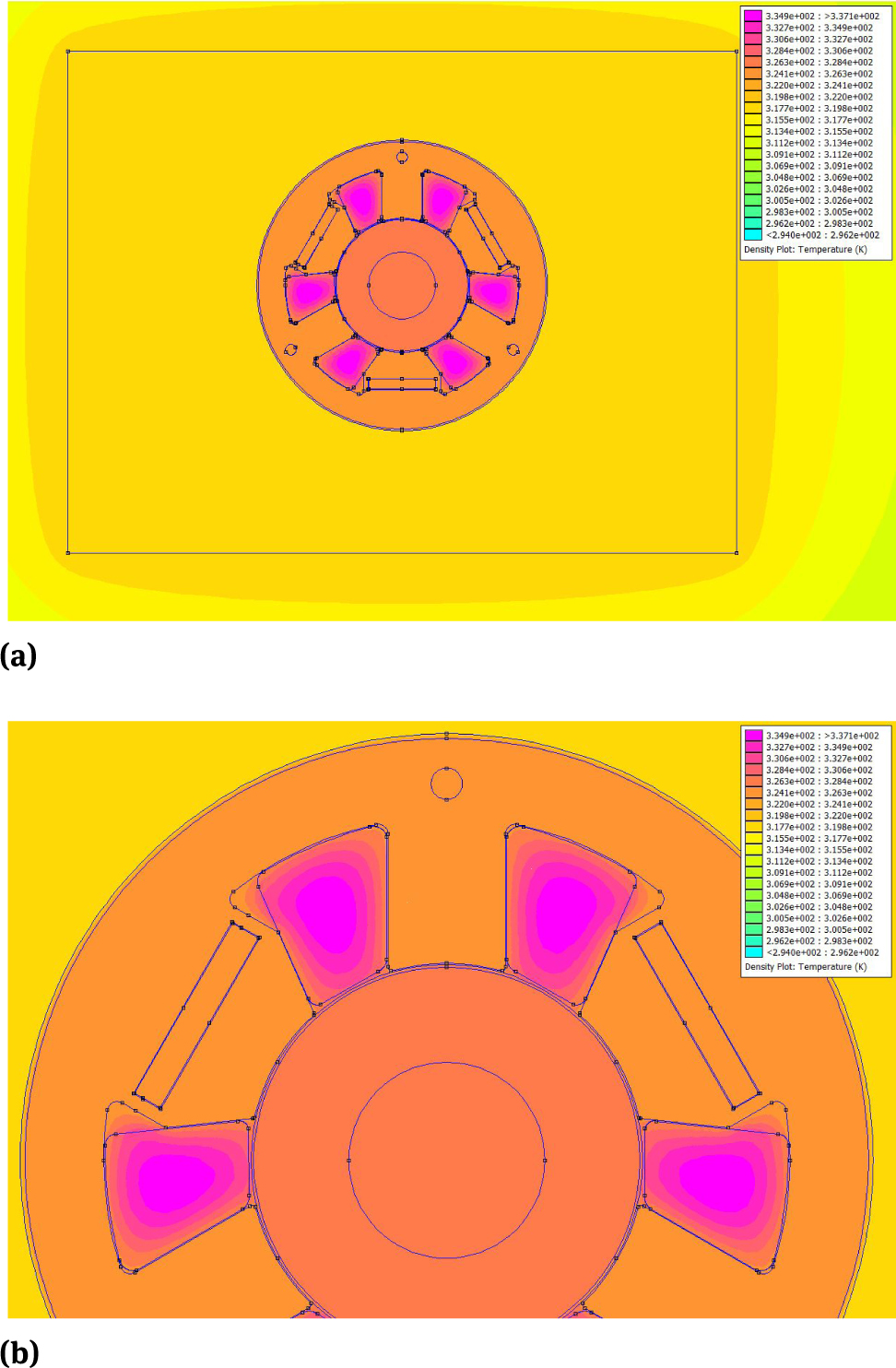 Figures 4a and 4b show the temperature distribution obtained from the 3D calculation model for the same excitation current values as assumed in the 2D model. 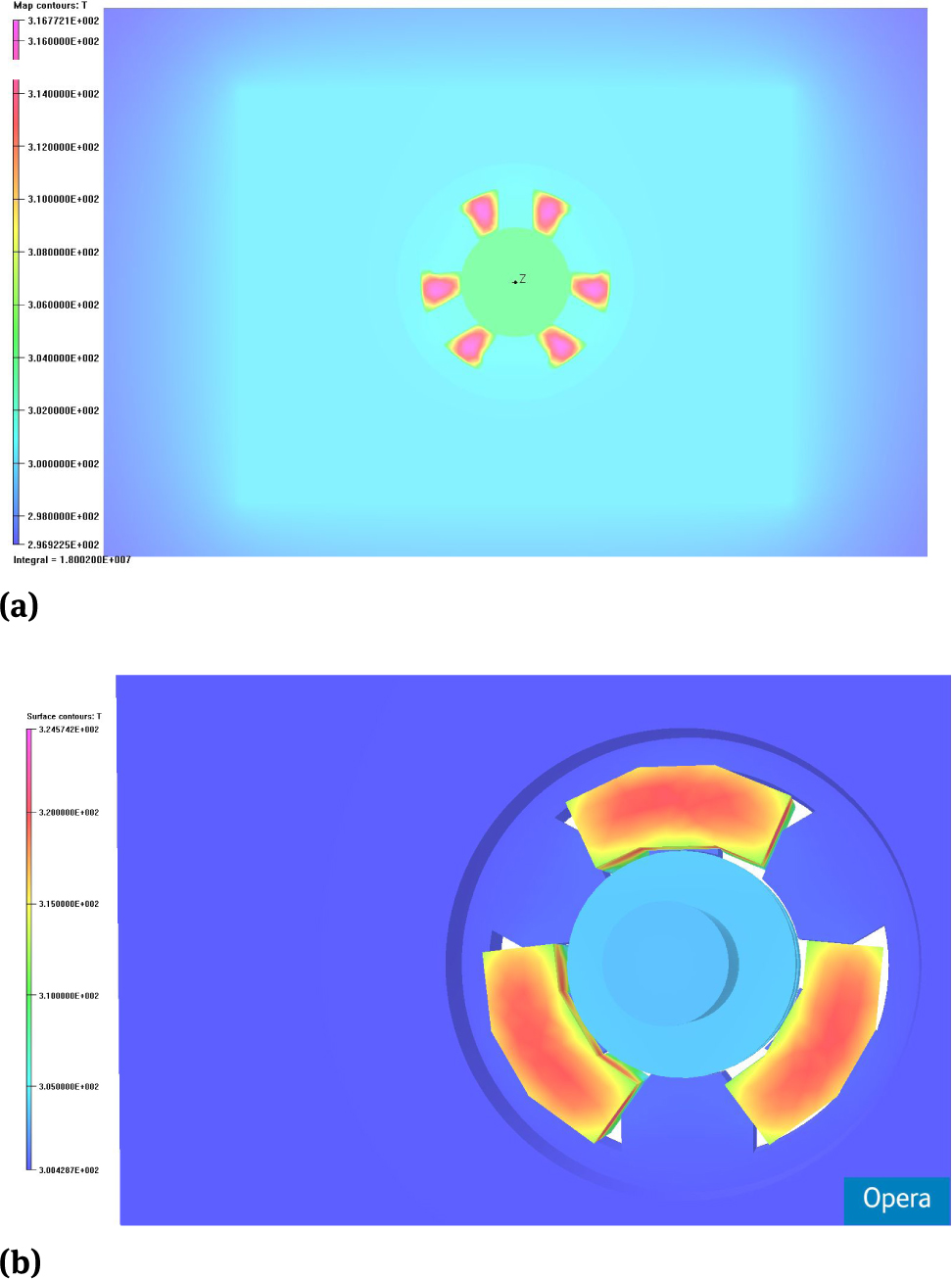 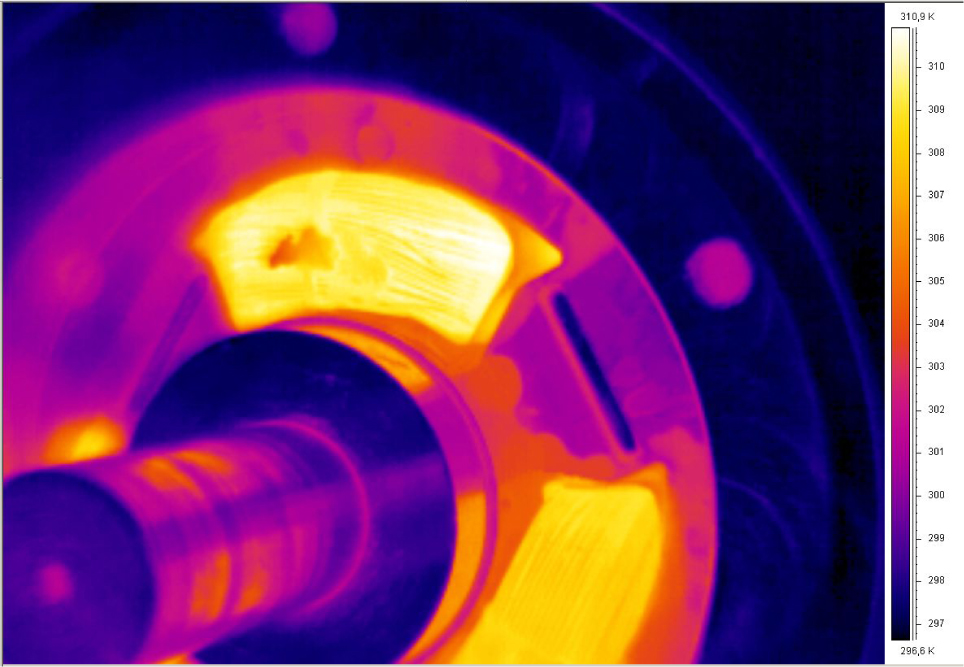 Table 2 presents a comparison of the temperature values at the test points obtained from the measurements, 2D model and 3D model for a current excitation of 2 A in the windings.

The results presented in table II indicate that the 2D model gives significantly higher temperatures in relation to the 3D model and the measurement results. The reason for these differences is that the 2D model omits convection from the front surface of the housing and windings. For the presented HMB, the 2D model is inaccurate and should not be used to perform thermal calculations.

Using the 3D model we calculated the temperature of the HMB for current intensities (excited in the windings) within the range from 2 A to 8 A. Figure 6 presents the temperature values for the testing points versus the current. 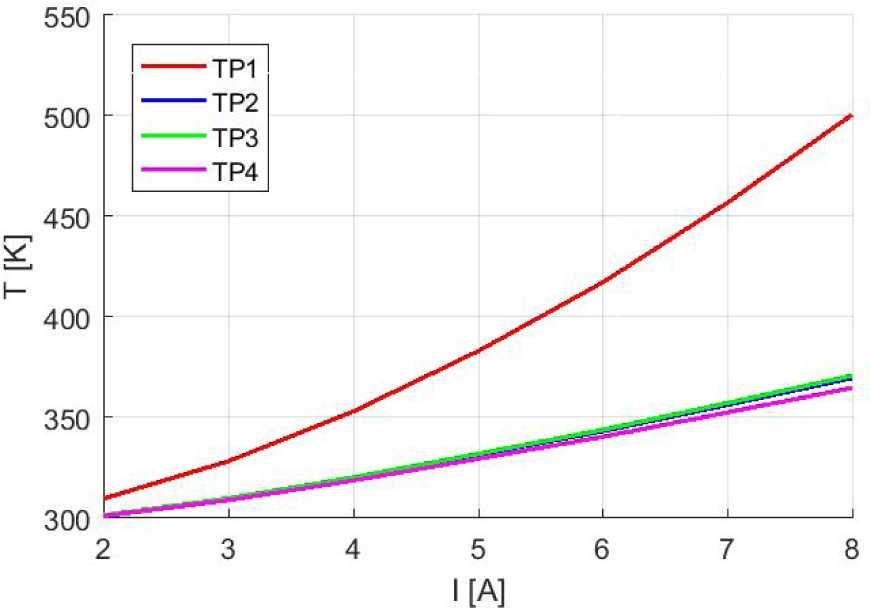 The paper presents two thermal finite element models of a hybrid magnetic bearing. The calculation models have been verified by measurement. It has been proved that the 2D model gives incorrect results because the sheet stack of the stator and rotor packages of the analysed object is relatively small in relation to its diameter. This causes significant heat dissipation on the front and back surface of the HMB. Based on the calculation results of the 3D model, the maximal value of the current which can be excited in the windings of the stator has been calculated as equal to 5.3A.

The presented thermal model can be used to obtain heating curves verso time. After completing the model with data like the specific heat capacity and density of the materials we can create a model of transient heating.

This work is licensed under the Creative Commons Attribution-NonCommercial-NoDerivatives 4.0 License.