Surface Contamination by Antineoplastics in Hospitals: An Observational Study for Mapping of Potential Contamination Associated with Handling Excreta of Babies through Diaper Management

In the hospital setting, trace contamination with hazardous medications comes primarily from the manipulation of containers used in preparing and administering drugs. However, some traces of medications also come from the excreta of patients.

This descriptive exploratory study involved direct observation and discussion. The aim was to map potential contamination associated with handling babies’ excreta through diaper management. The study was conducted at CHU Sainte Justine (Montréal, Québec, Canada), a 500-bed mother and child facility with 38 beds for hematology-oncology and bone marrow transplant. A list of key steps related to the management of diapers by a parent or caregiver on a pediatric unit was established by the investigators. A data collection grid was then developed and reviewed by a member of the research team.

A total of six diaper changes, by six distinct individuals, were observed in August and September 2019. Transport of a soiled diaper for weighing outside the baby’s room by an additional caregiver was also observed and recorded. In total, 25 individual steps in diaper management and 28 potential failure modes were identified through mapping.

The environmental presence of traces of hazardous drugs (categorized as Group 1, Group 2 and Group 3 by the US National Institute for Occupational Safety in Health) can occur both in the pharmacy and at patient care sites (e. g. outpatient clinics and patient care units) [1, 2, 3]. This trace contamination comes primarily from the manipulation of containers used in preparing and administering drugs. However, some traces of medications also come from the excreta of patients [4, 5]. This second source of contamination has not been well studied.

In general, the mean daily intake of liquid for an adult is 1600 mL (consisting of 500 mL of water ingested as such, 800 mL of water in food and 300 mL of water from carbohydrate oxidation). A similar amount of liquid is typically eliminated in the excreta (500 mL in the urine, 500 mL via the skin, 400 mL via the respiratory tract and 200 mL via the stool) [6]. The volumes of ingesta and excreta are lower in children [7]. For example, in children under 10 kg body weight, daily fluid losses are estimated at 100 mL/kg.

After administration, oral and injectable drugs undergo metabolic transformation in the human body, with variable proportions of each drug being eliminated unchanged and in metabolized form in patients’ urine and feces [8]. Most adults can manage their excreta without spillage outside the toilet. However, surfaces close to a toilet may be contaminated by splashing or by contact with contaminated skin (e. g. genitals, buttocks, hands). With children, especially in pediatric units, the risk of contamination increases because of incontinence, the wearing of diapers and potential cross-contamination between a child’s hands and various surfaces.

The aim of this study was to map potential contamination associated with handling the excreta of babies through diaper management.

The study was conducted at CHU Sainte Justine (Montréal, Québec, Canada), a 500-bed mother and child facility with 38 beds for hematology-oncology and bone marrow transplant.

To map potential contamination, the investigators first developed a list of key steps related to diaper management by a parent or caregiver on a pediatric unit. A data collection grid was then developed and reviewed by a nurse, who was also a member of the research team (GM).

Over the subsequent four-week period, a research assistant (MP) regularly contacted the head nurse to identify opportunities to directly observe a daytime diaper change by a parent or caregiver. At each such opportunity, the research assistant notified the parent or caregiver of the plan to directly observe the diaper change without intervention and obtained the person’s verbal consent. These observations were described to both parents and caregivers as “quality audits”. For each observation, the research assistant recorded all steps and risk behaviors associated with the manipulations, in particular participants’ behaviors in relation to wearing gloves.

From these data (observations and discussion with staff), we mapped failure modes and potential contamination associated with handling diapers and babies’ excreta.

No statistical analyses were conducted.

Steps in changing a baby’s diaper in the hospital setting.

A total of six diaper changes, by six distinct individuals, were observed in August and September 2019. Transport of a soiled diaper for weighing outside the baby’s room by an additional caregiver was also observed and recorded. Participants’ behaviors in relation to wearing gloves for each main step are also reported in Table 1.

The materials needed for a diaper change (e. g. clean diaper, baby wipe, cream) were prepared ahead of time by all six participants. The clean diaper was placed next to the baby or under the soiled diaper awaiting its implementation. Participants also put a cotton protective pad under the child before changing the diaper, but none of them removed the pad afterward. After removing the soiled diaper, five of the participants placed it on an unprotected surface; one person disposed of the diaper immediately.

All participants put on gloves at the start of the diaper change, but the timing of removal of gloves was highly variable from one person to another.

Other potential personal protective equipment that can be used in caring for a patient (e. g. gown and mask if there is a risk of splashing) were not used during any of the diaper changes, with the exception of one baby in isolation, who was receiving pre-transplant chemotherapy [4]. 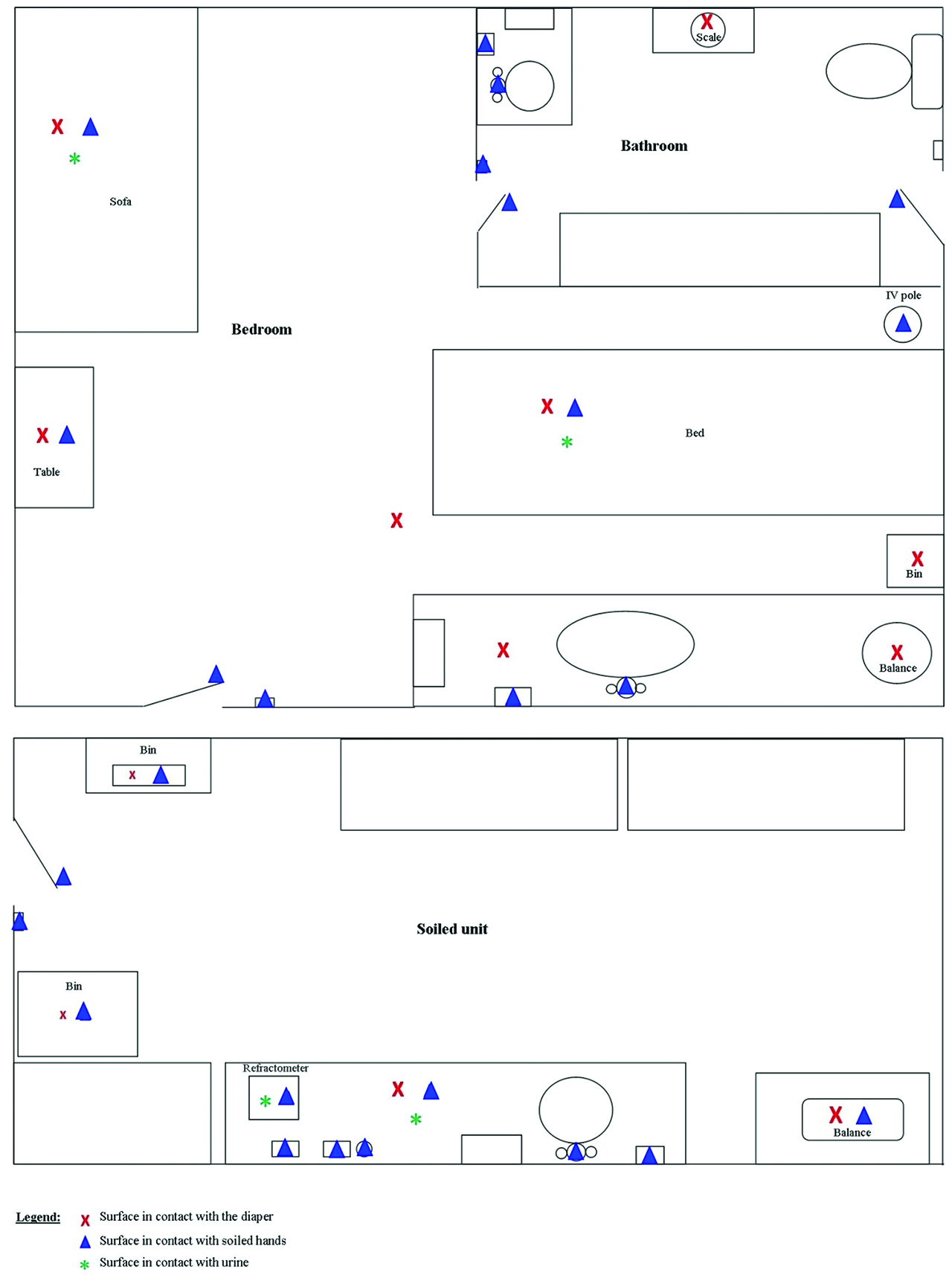 Mapping of surfaces in a patient’s room and a patient care unit potentially contaminated with a hazardous drug after a diaper change.

The nurse who carried the diaper to weigh it and throw it into the soiled unit also wore gloves.

Four of the seven diapers were weighed during study observations: two during the course of the diaper change and two after a delay; in one of the latter cases, the diaper was left on the patient’s bed, and in the other case, it was left on the weight scale. Weighing was carried out in the baby’s bathroom (n=2/4), in the patient’s room (n=1/4) or in the soiled unit (n=1/4). Of the four scales used, two were cleaned immediately afterward.

With regard to disposal, all six diapers were thrown into a conventional trash can, either in the patient’s room or in the baby’s bathroom; one diaper was discarded in the bin for biohazardous waste in the soiled unit by a nurse.

Five of the seven participants performed hand washing with soap after contact with a soiled diaper.

These observations and subsequent discussion with caregivers highlighted many risks of contamination throughout the diaper change process. For example, caregivers were likely to touch many surfaces in the immediate vicinity shortly after their hands became contaminated.

Figure 1 shows surfaces in a patient’s room and a patient care unit that could be contaminated by hazardous drugs after a diaper change.

On the basis of these observations and discussion with staff, we identified a total of 28 failure modes that could lead to contamination with a hazardous drug during a diaper change (Figure 2). 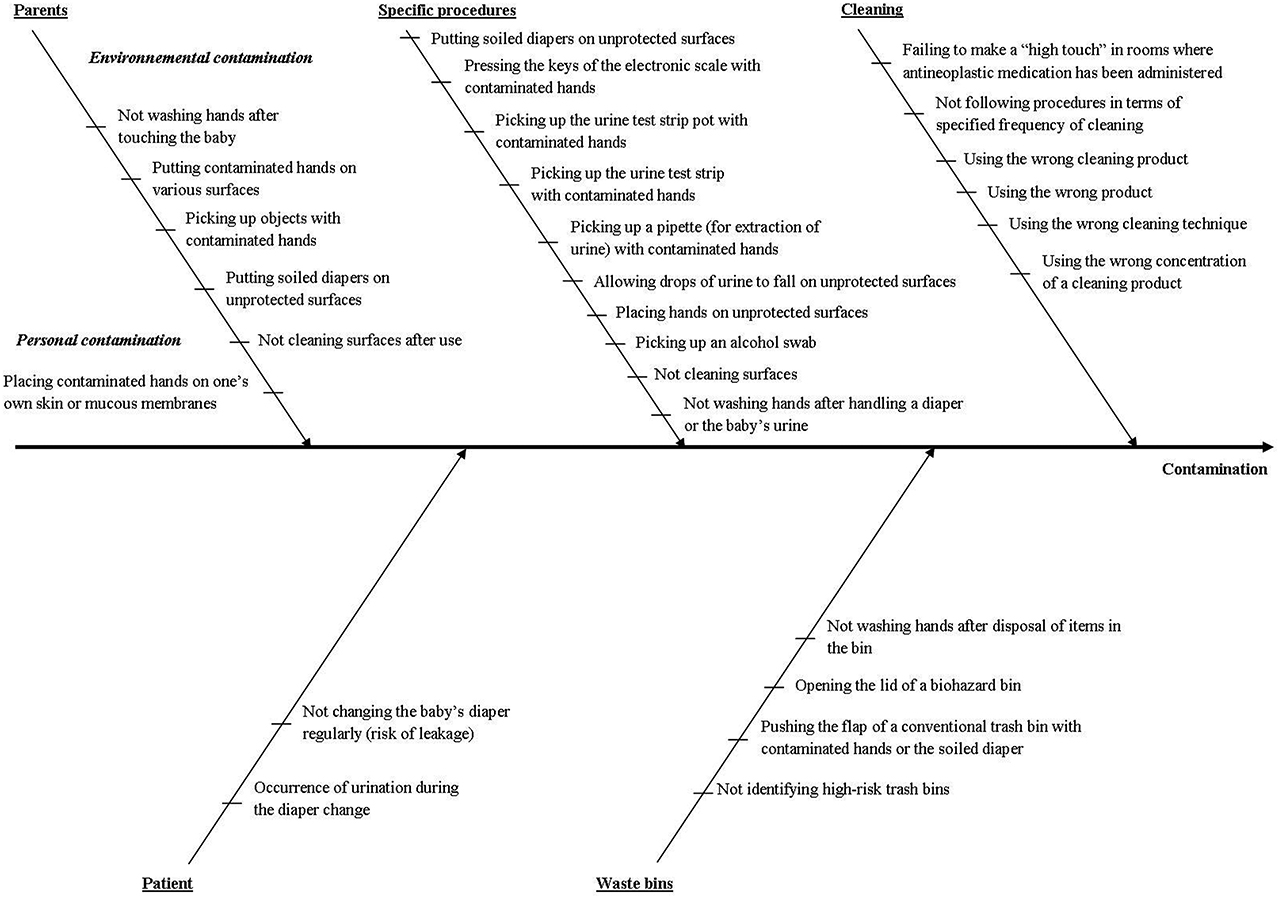 Failure modes that could lead to contamination with a hazardous drug during a diaper change.

In this descriptive study, we have presented maps of potential contamination with hazardous drugs of surfaces in a patient’s room and a patient care unit after a baby’s diaper is changed.

Many approaches are used to protect health care workers from contamination with hazardous drugs in hospitals, including training, policies and procedures, personal protective equipment, centralized purging of tubing at the pharmacy, washing of the exterior of drug containers, use of closed system transfer devices and environmental monitoring [4, 5, 9, 10, 11]. All of these measures help to reduce contamination in the environment.

However, most guidelines do not emphasize the risks associated with human excreta. Although antineoplastic compounding is centralized in the oncology pharmacy and efforts are made to avoid spills or leaks during the administration of hazardous drugs, all patients excrete hazardous drugs in unchanged and metabolized forms. The prevalence of contamination of excreta has been reported [12, 13], but when workers are exposed to contamination it is generally impossible to identify the source (e. g. related to product manipulation or to patients’ excreta).

Nursing staff and other workers (e. g. volunteers, housekeeping staff) are usually aware of the risks of infection associated with handling patients’ excreta, but they may be less likely to realize the risks associated with the presence of traces of hazardous drugs in their work environment. In this regard, Walton [14] mentioned a lack of training and follow-up for nursing assistants who faced the risk of antineoplastic contamination. Meijster et al. [15] identified the risks of exposure for people working with antineoplastic drugs outside the hospital setting.

Our study showed great variability in the wearing of personal protective equipment and the steps performed in changing a diaper. These findings are in agreement with the literature [19, 20]. For example, Polovich and Martin [21] highlighted that gloves were always worn for handling excreta, but other protective equipment was worn less often (e. g. gowns, 77 %; eye protection, 56 %; respiratory protection, 40 %).

In pediatrics, diapers are often changed by the parent, who typically stays in hospital during the child’s admission. At the study hospital, parents can sleep in the baby’s room, which ensures a nearly continuous parental presence and surveillance. Although parents are given important information about the child’s treatment plan, the nature of the medications to be used, and individual protection measures, our study suggests the importance of further informing parents about the optimal management of diapers and excreta, both during the hospital stay and after hospital discharge.

This study had some limitations. The number of diaper changes observed was limited (i. e. six). However, during these observations, all of the steps in the process of changing a diaper were performed. Observation of a larger number of people performing diaper changes, including both caregivers and parents, would be desirable. It is difficult to predict a diaper change that can occur at any time and although a full observation only requires 30–45 minutes depending on the procedures performed, the observer must be available on call and move quickly when a parent or a caregiver indicates the advisability of carrying out an observation. Our preliminary observations clearly show the potential risks of contamination by hazardous drugs associated with diaper changes, but these risks are theoretical. A descriptive study involving surface sampling for traces of hazardous drugs could be used to quantify the level of contamination. In addition, direct observations carry a risk of bias. Finally, it is possible that the wearing of personal protective equipment could be less consistent than those observed in this study.

14. Walton A. Doing the dirty work: who handles antineoplastic drug contaminated excreta and do they do it safely? Asia-Pacific J Oncol Nursing 2017;4:120.10.4103/apjon.apjon_8_17Search in Google Scholar PubMed PubMed Central

Article Surface Contamination by Antineoplastics in Hospitals: An Observational Study for Mapping of Potential Contamination Associated with Handling Excreta of Babies through Diaper Management

Frontmatter
Carbidopa Capsules for Insulinoma Diagnostic: Compounding and Stability Study
Controlling Risks in the Compounding Process of Individually Formulated Parenteral Nutrition: Use of the FMECA Method (Failure modes, effects, and Criticality Analysis)
European Databases on Stability and Compatibility of Injectable Medicinal Products in Europe
Surface Contamination by Antineoplastics in Hospitals: An Observational Study for Mapping of Potential Contamination Associated with Handling Excreta of Babies through Diaper Management