The role of meditation in college students' neuroticism and mental health

A large number of empirical studies have found evidence that neuroticism is related to personality traits, but no one has integrated the relationship between neuroticism and mental health through meta-analysis. As a personality trait, neuroticism reflects the stable tendency of how individuals experience, feel, evaluate negative emotions and make corresponding behavioural responses. By means of meta-analysis, a preliminary dimension of neuroticism is constructed through an open questionnaire and literature review. On this basis, a preliminary neuroticism questionnaire for college students is compiled. The structural model of College Students' neuroticism questionnaire fits well, and has a high correlation with the neuroticism subscale of the simple version of Big Five Personality Questionnaire, which shows that it has a good structural validity. The positive orientation indicators of subjective well-being, life satisfaction and other mental health indicators were also selected. In addition, self-assessment indicators of physical health were selected. It was found that neuroticism was highly correlated with appeal indicators, indicating that the questionnaire of College Students' neuroticism had good validity.

Contemporary college students shoulder the mission of building socialism with Chinese characteristics and realizing the great rejuvenation of the Chinese nation. Their mental health level is not only related to the stability and development of the future society, but also to the healthy growth of the next generation. Therefore, the mental health of college students has become an important topic in the fields of psychology, education, management, and economics. Research in these fields shows that the mental health of college students is affected by many factors, among which neuroticism is one of the important factors. The core feature of neurotic personality is the tendency to experience negative emotions. This tendency causes individuals to experience more negative emotions and less positive emotions, thus making neuroticism have a negative impact on mental health, manifested as neurotic personality is depression. Susceptibility factors for common mental disorders such as symptoms and anxiety disorders.

Meditation is now regarded as important cognitive factors lead to depression, and is closely related to the individual’s emotional state. When individuals in the social information processing, the meditation of cognitive style tends to lead to repeated thinking of subjective negative feelings, that more durable for depression, poor circulation, meditation and depression will ultimately affect the mental health of the individual.

Neuroticism is highly correlated with anxiety and depression symptoms, which has been confirmed in the study of normal and clinical samples. Many theories have proposed some models to explain this phenomenon. Some people think that meditation is related to neuroticism and others point out that the mode of meditation response is probably a neurotic cognitive expression. The relationship between neuroticism and mental health of domestic college students was calculated. The homogeneity test was carried out based on the results of meta-analysis. Q=372.4971, df=18, p<0.001. The difference was significant. Random effect model should be used to calculate the average effect value [2]. The meta-analysis of the correlation coefficient between neuroticism and mental health of college students in China is shown in Table 1 below.

3 The relationship between contemplation and mental health

Many individuals tend to adopt a negative coping style when they realize that the target state of the self is different from the current state, which is, seeking the result and value meaning by repeatedly thinking about the same subject content. The response method often does not help the individual to solve the problem, but will deepen the individual’s level of depression. This coping style is contemplation.

Meta-analysis of neuroticism and mental health in foreign countries

Fitting index of the structure of college students’ neurotic questionnaire 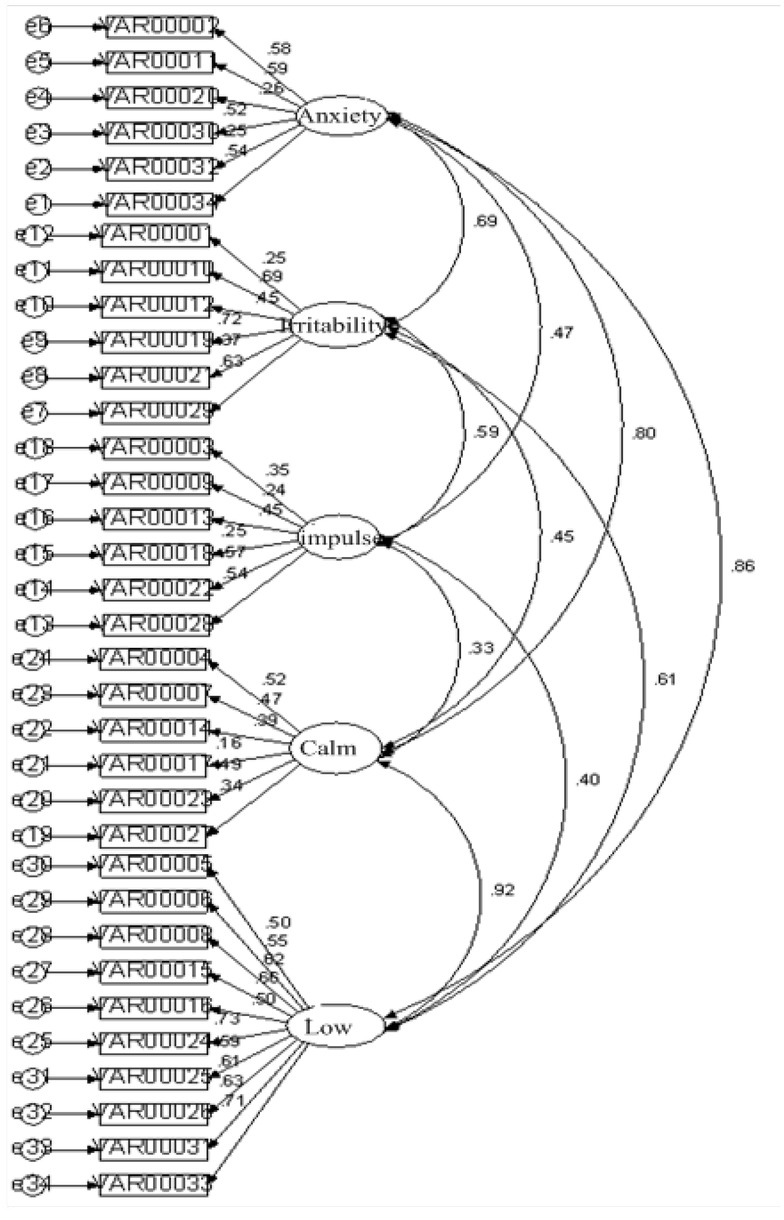 3.2 The relationship between contemplation and anxiety

As a stable coping style, meditation makes individuals tend to think continuously without solving problems in the face of sad emotions. The reaction style theory that leads to depression is pointed out that the meditation of negative events will increase the depression of individuals and be negative. Cognitive influences amplify negative emotions. To more fully validate this theory, Nolen-Hoeksema’s longitudinal study of adolescents found that meditation can predict depressive symptoms and drug abuse behaviour findings that anger meditation makes individuals More attention to the possible outcomes after anger, and thus unable to extricate themselves, is easy to provoke the individual’s bad mood. The results show that meditation is not only a symptom of depression, but also an important factor in predicting the persistence of an individual’s negative emotions. 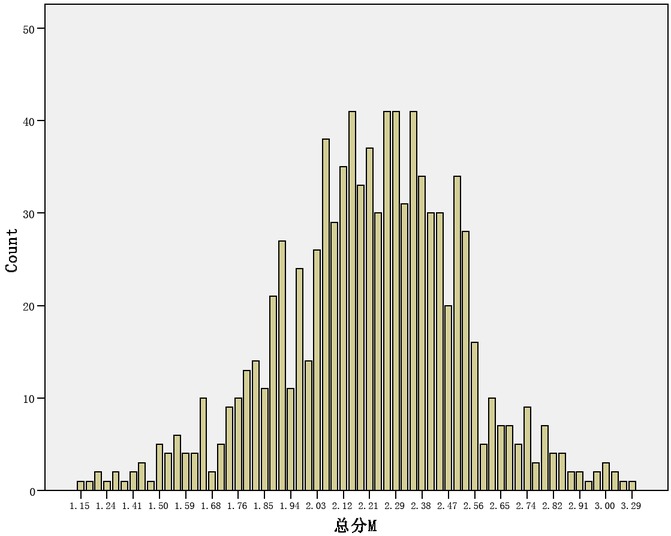 Relationship between score distribution of neurotic score and anxiety 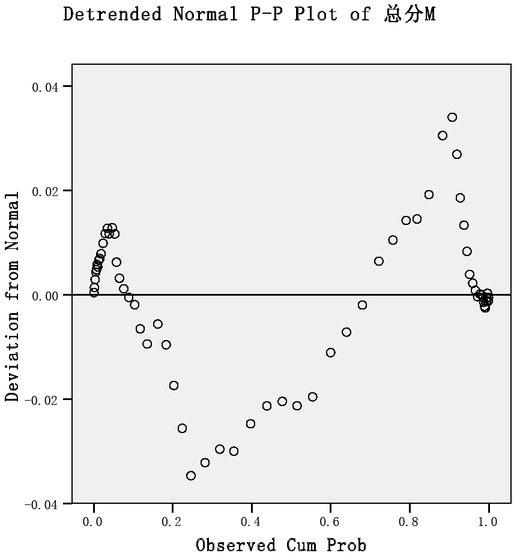 3.3 Relationship between meditation and life satisfaction

Meditation training can improve positive emotions and life satisfaction, reduce negative emotions, and effectively improve the subjective well-being and psychological well-being of individuals. It can relieve stress, improve the ability of emotion regulation, effectively improve the level of anxiety and depression of individuals, improve the level of alpha wave of EEG, reduce the level of EMG and heart rate, and significantly improve the increase of my electricity and heart rate caused by the activation of the sympathetic nervous system fast. Mindfulness meditation training reduces stress, regulates emotions, enhances self-acceptance and pursuit of life goals, promotes inner growth, and establishes good relationships with others is one of the potential mechanisms for enhancing individual subjective well-being and psychological wellbeing.

Among them, low-key sensitivity was the most predictive, and its individual explanation was 21.7%. The results of regression analysis of neuroticism on subjective well-being are as follows:

With the scores of neuroticism and overall satisfaction as independent variables, stepwise regression analysis was carried out. The three dimensions included in the equation were low sensitivity, calm and open-minded, and impulsive excitement.

Meditation is an individual’s cognitive style, which plays an important role in depression, anxiety disorders and other mental disorders, as well as vascular diseases, other chronic diseases and other physiological diseases. Therefore, reducing the level of individual meditation can improve the level of individual physiology and physical health. Effective therapies for reducing meditation include the following: attention diversion, mindfulness training, including mindfulness decompression therapy and mindfulness cognitive behavioural therapy. This non-critical acceptance may be one of the internal mechanisms for reducing meditation.

4.2 The mechanism of neuroticism on positive mental health

Relationship between neuroticism and physical and mental health

Using AMOS 7.0 constructs the structural equation model of neuroticism, mental health and physical health. As shown in the figure above, the fitting index of the model is shown in Table 6.

From the above table, we can see that the fitted indexes of neuroticism and physical and mental health model are good, which shows that the model is reasonably constructed. Meditation, that is, compulsive meditation and reflection, partially mediates the relationship between neurotic personality and depressive symptoms.

Contemplation is a complex mode of thinking. With the deepening of deep thinking research, more and more researchers have carried out multi-level analysis on it, but our research in the field of contemplation is still in the preliminary stage. Existing contemplative research Focusing on the related theories, meditation and the relationship between gender, age, negative emotions and mental health, but there are few studies on the influence mechanism and neurobiological basis of meditation, the measurement tools are relatively simple, and have not yet formed unified meditation definition.

[7] Moghanizadeh. “The mediating relationship between internet addiction with happiness and personality traits in students.” Journal of Fundamentals of Mental Health20.3 (2018): 236-247.Search in Google Scholar