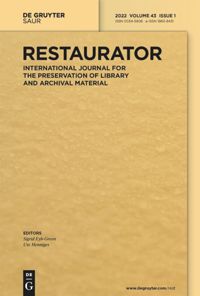 Restaurator. International Journal for the Preservation of Library and Archival Material