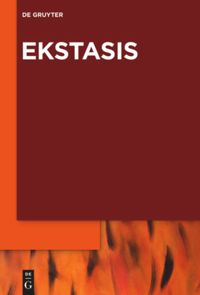 Ekstasis: Religious Experience from Antiquity to the Middle Ages